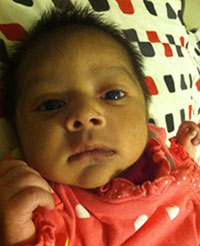 Jamie and Oscar were excited to add a third child to their growing family. On Saturday, March 23, 2013, Jamie gave birth to a healthy baby girl they named Jazzlyn. “She was such a happy baby,” recalls Jamie. “She loved playing peek-a-boo and I would often catch her with a smile on her face.”

When Jazzlyn was about three weeks old, Jamie noticed that she had developed a slight cough. The pediatrician recommended using a humidifier and returning if she got worse. Several days later, Jazzlyn started having trouble breathing. “I heard a grunt and went to check on Jazzlyn. She was turning different shades of purple and not breathing,” Jamie remembers. “It was such a relief when she started crying.” Still concerned, Jamie decided to take Jazzlyn to the emergency room. While at the hospital, Jazzlyn stopped breathing again and the doctors had to revive her.

The next day, a helicopter took Jazzlyn to a hospital that could better handle her illness. There she received 7 medications and was hooked up to a ventilator (a machine to help her breathe). Her new doctor suspected that she had whooping cough. At first, Jazzlyn seemed to be doing better, but she took a turn for the worse. The doctors performed a procedure to help her breathe, but it only helped for a little while. The following day, doctors told Jamie and Oscar that Jazzlyn needed immediate surgery. “Our hearts dropped,” Jamie recalls. ”We decided to baptize her that night while all of our family was there.”

Babies are at high risk for complications from whooping cough. Although death from whooping cough is rare, most are among babies who are too young to be protected by their own vaccinations, which don’t begin until they are 2 months old. By getting the whooping cough vaccine (also called Tdap) in your third trimester, you will pass antibodies to your baby so she is born with protection against whooping cough.

The next morning, Jamie and Oscar learned that there was nothing more the doctors could do. Jazzlyn’s kidneys had shut down and her heart was beginning to as well. At 11 am on April 25, 2013, Jazzlyn passed away peacefully. “She was too sick and her body was too weak to fight this,” Jamie explains.

Jazzlyn’s final diagnosis was pneumonia caused by whooping cough. They still don’t know how she got it.

“I want people to know how serious whooping cough can be and that it can be prevented,” says Jamie, who hadn’t heard of or been offered the whooping cough vaccine (also called Tdap) while she was pregnant. “Vaccines are really important and by getting this one, mothers can help protect their babies. If I get pregnant again, I would definitely get Tdap during my pregnancy to help protect my baby.”