The global campaign to eradicate Guinea worm disease (GWD) began in 1980 at the U.S. Centers for Disease Control and Prevention (CDC). CDC suggested that the eradication of GWD (also known as dracunculiasis) would be an ideal indicator of success for the United Nations International Drinking Water Supply and Sanitation Decade (IDWSSD) (1981–1990) because it was believed that people could only get GWD by drinking contaminated water. A year later, GWD eradication was adopted as a sub-goal of the IDWSSD[1, 2, 3]. In 1984, CDC was designated as the WHO Collaborating Center for Research, Training, and Eradication of Dracunculiasis. In 2017, the Collaborating Center changed its name to the WHO Collaborating Center for Dracunculiasis Eradication.

In 1986, there were 20 countries with GWD. These countries had about 3.5 million human cases per year. Most (90%) cases occurred in Africa. An additional 120 million people in Africa were at risk for GWD because of unsafe water supplies[2, 4]. That year, the World Health Assembly (WHA) adopted a formal resolution calling for the elimination of GWD, country by country[5]. The Carter Center, working closely with Ministries of Health, took the lead for the global Guinea Worm Eradication Program (GWEP) in 1986 and built local, national, and international partnerships. Support came from numerous donor agencies, foundations, institutions, and governments. Based on the success of the GWEP, the WHA adopted its first resolution to eradicate GWD from the world in 1991[6]. A country has successfully interrupted transmission and eliminated GWD when there have been no reports of GWD for three or more years[1, 2, 3]. When all countries are certified by WHO as having eliminated GWD or never having had GWD, then global eradication will be achieved.

WHA initially targeted GWD for eradication because it met the following specific criteria:

It was biologically and technically possible to eradicate this disease[2, 7, 8, 9].

While support for eradication was felt to be strong in endemic countries, there were political and societal barriers to eradication that were also considered by the WHA. Political support was and still is variable, even in endemic countries. International donor support was and is difficult to maintain for this neglected tropical disease (NTD). NTDs affect the poorest populations, including people living in remote rural areas or conflict zones who often have little political voice. Therefore, diseases such as GWD generally have a low profile and limited status in the list of public health priorities[1, 2, 3]. Nevertheless, in 1986 and again 1991 the WHA adopted the resolution to eliminate and then eradicate GWD.

Criteria for Certification of GWD Eradication

GWD transmission is interrupted in a country once no new GWD cases occur for 12 consecutive months (i.e., one incubation period). At this point, countries can apply for certification of GWD-free status from the International Commission for the Certification of Dracunculiasis Eradication (ICCDE)[11].

The ICCDE is a panel of international GWD specialists. It was established by WHO in 1995 to verify and confirm information from countries applying for certification. The ICCDE considers GWD eradication to be achieved in a country when

The ICCDE certifies a country as being free from GWD after it confirms these criteria have been met and receives a national report detailing the history of GWD in that country[11]. In countries with a history of GWD or those considered to be potentially “high risk” for GWD, the World Health Organization organizes an International Certification Team that includes GWD experts from multiple countries to visit the country, evaluate the national report, and make recommendations to the ICCDE[12]. 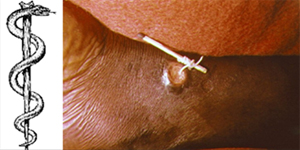 Extracting a Guinea worm from the ankle by wrapping it around a stick. Credit: Public Health Image Library/1968

Great progress has been made in the last three decades. The ICCDE has certified 199 countries, territories, and areas as free of GWD transmission, with only 7 countries remaining to be certified: Angola, Chad, Democratic Republic of the Congo, Ethiopia, Mali, South Sudan, and Sudan [13].

Recent research has shown that certain aquatic animals can become infected by eating copepods (tiny “water fleas” too small to be clearly seen without a magnifying glass) that have been infected with Guinea worm larvae[15,16]. Larvae are immature forms of the Guinea worm that contaminate water. Animals (e.g., dogs) and humans who live in countries where GWD is occurring and consume raw or undercooked aquatic animals either whole or in part (for example, small whole fish that have not been gutted, fish guts, and frogs) may be at risk for GWD.

With the discovery of GWD in animals, mostly domestic dogs in Chad, the GWEP has expanded its interventions to address possible spread by aquatic animals. These include providing health education about burying or burning fish guts left over from fish processing to prevent dogs from eating them, and avoiding feeding fish guts to dogs. People are also advised to thoroughly cook any fish and other aquatic animals before eating them to prevent themselves from becoming infected. A reward is also offered for persons who report GWD in their dogs before the dogs can contaminate water; the reward helps cover the cost of tethering, feeding, and caring for the dog with the help of the GWEP until the worm or worms are safely removed.

* A case of GWD is contained if all of the following conditions are met: 1) the patient is detected before or within 24 hours of worm emergence; and 2) the patient has not entered any water source since the worm emerged; and 3) a village volunteer or other health care provider has properly managed the case, by cleaning and bandaging the wound until the worm is fully removed and by giving health education to discourage the patient from contaminating any water source (if two or more emerging worms are present, the case is not contained until the last worm is pulled out); and 4) the containment process, including verification that it is a case of GWD, is validated by a supervisor within 7 days of the emergence of the worm; and 5) the approved chemical temephos (ABATE®†) is used if there is any uncertainty about contamination of sources of drinking water, or if a source of drinking water is known to have been contaminated. The criteria for defining a contained case of Guinea worm disease in a human also should be applied, as appropriate, to define containment for an animal with a Guinea worm infection. [17]

† Use of trade names is for identification only and does not imply endorsement by the Public Health Service or by the U.S. Department of Health and Human Services.