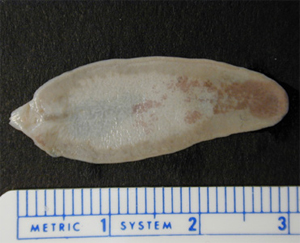 Fascioliasis occurs in many areas of the world and usually is caused by F. hepatica, which is a common liver fluke of sheep and cattle. In general, fascioliasis is more common and widespread in animals than in people. Even so, the number of infected people in the world is thought to exceed two million.

Fasciola hepatica is found in focal areas of more than 70 countries, in all continents except Antarctica. It is found in parts of Latin America, the Caribbean, Europe, the Middle East, Africa, Asia, and Oceania. Fasciola gigantica is found in fewer geographic regions. Human cases have been reported in the tropics, in parts of Africa and Asia, and also in Hawaii.

In some areas where fascioliasis is found, human cases are uncommon (sporadic). In other areas, human fascioliasis is very common (hyperendemic). For example, the areas with the highest known rates of human infection are in the Andean highlands of Bolivia and Peru.

Infective Fasciola larvae (metacercariae) are found in contaminated water—typically, stuck to (encysted on) water plants or, potentially, floating in the water—such as in marshy areas, ponds, or flooded pastures. The main way people (and animals) become infected is by eating raw watercress or other contaminated water plants (for example, if the plants are eaten as a snack or in salads or sandwiches). Some data suggest people also might get infected by ingesting contaminated water, such as by drinking it or by eating vegetables that were washed or irrigated with contaminated water. Under unusual circumstances, infection might result from eating raw or undercooked sheep or goat liver that contains immature forms of the parasite.

The possibility of becoming infected in the United States should be considered, despite the fact that few locally acquired cases have been documented. The prerequisites for the Fasciola life cycle exist in some parts of the United States. In addition, transmission because of imported contaminated produce could occur, as has been documented in Europe.