Angiostrongylus costaricensis is the causal agent of abdominal angiostrongyliasis and is discussed here. 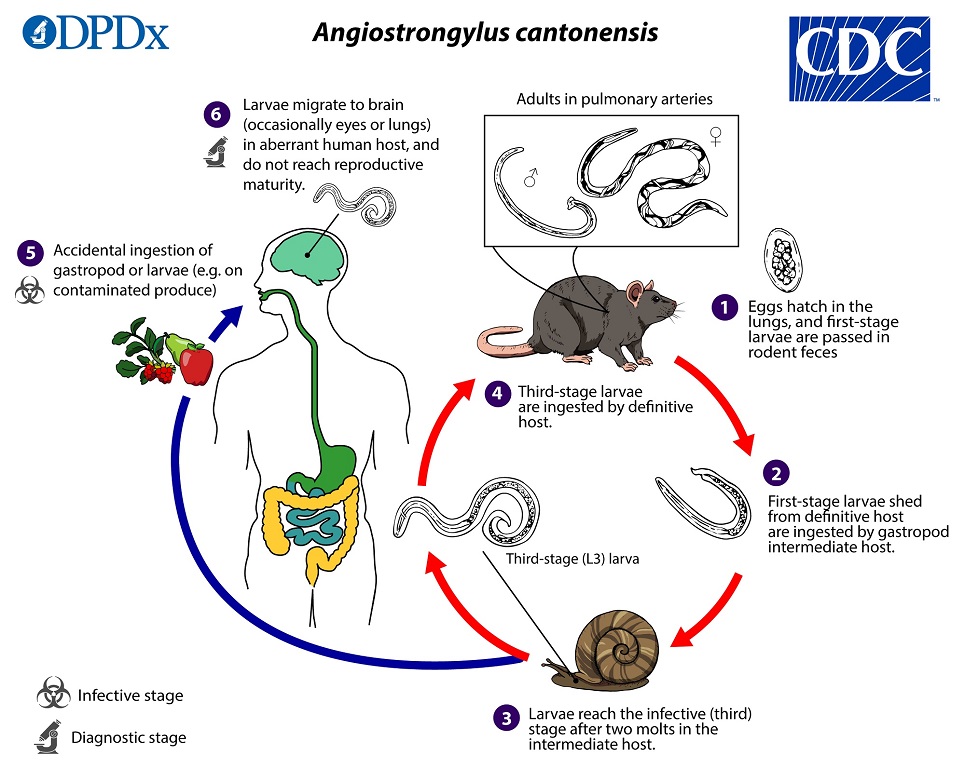 View Larger
Adult worms of A. cantonensis live in the pulmonary arteries and right ventricle of the normal definitive host

. The females lay eggs that hatch in the terminal branches of the pulmonary arteries, yielding first-stage larvae. The first-stage larvae migrate to the pharynx, are swallowed, and passed in the feces. They penetrate or are ingested by a gastropod intermediate host

which are infective to mammalian hosts. When the infected gastropod is ingested by the definitive host, the third-stage larvae migrate to the brain where they develop into young adults

. The young adults return to the venous system and then the pulmonary arteries where they become sexually mature. Of note, various animals act as paratenic (transport) hosts: after ingesting the infected snails, they carry the third-stage larvae which can resume their development when the paratenic host is ingested by a definitive host. Humans can acquire the infection by eating raw or undercooked snails or slugs infected with the parasite; they may also acquire the infection by eating raw produce that contains a small snail or slug, or part of one

. There is some question whether or not larvae can exit the infected gastropods in slime (which may be infective to humans if ingested, for example, on produce). Infection may also be acquired by ingestion of invertebrate paratenic hosts containing L3 larvae (e.g. crabs, freshwater shrimp). In humans, larvae migrate to the brain, or rarely to the lungs, where the worms ultimately die

. Larvae may develop to fourth or fifth stage in the human host, but seem to be incapable of maturing fully.

Most cases of A. cantonensis-associated eosinophilic meningitis originate from Southeast Asia and Pacific Islands. The parasite has also been reported from Africa, the Caribbean, Australia, Hawaii, and recently the southern United States.

The most notable manifestation of A. cantonensis infection is eosinophilic meningitis caused by the presence of larvae in the brain and resultant local host reactions. Somatic symptoms (e.g. headache, fever, malaise) as well as varying degrees of neurological dysfunction are usually noted. A. cantonensis infection may occasionally prove fatal. Ocular angiostrongyliasis is associated with uveitis, blurred vision, and a substantial loss of visual acuity.