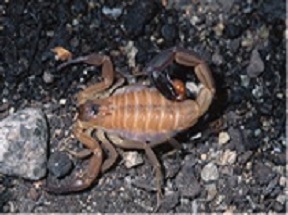 Scorpions usually hide during the day and are active at night. They may be hiding under rocks, wood, or anything else lying on the ground. Some species may also burrow into the ground. Most scorpions live in dry, desert areas. However, some species can be found in grasslands, forests, and inside caves.

Symptoms of a scorpion sting may include:

These symptoms usually subside within 48 hours, although stings from a bark scorpion can be life-threatening.

Employers should protect their workers from scorpions by training them about:

Workers should take the following steps to prevent scorpion stings:

Workers should take the following steps if they are stung by a scorpion: