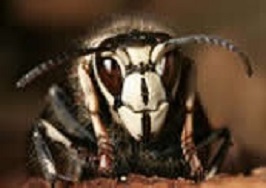 Bees, wasps, and hornets are most abundant in the warmer months. Nests and hives may be found in trees, under roof eaves, or on equipment such as ladders.

Bees, wasps, and hornets are found throughout the United States.

Employers should protect their workers from stinging insects by training them about:

Workers should take the following steps to prevent insect stings:

If a worker is stung by a bee, wasp, or hornet: