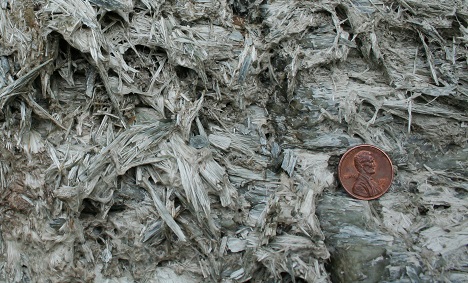 Asbestos with a penny to show the size

Asbestos is the name used to group a class of naturally occurring mineral fibers that have been widely used in the industry and is associated with adverse effects on human health. Asbestos fibers have been widely used in industrial and commercial applications because of its strength, flexibility and electrical and heat resistant properties. Some examples of its applications include automobile brakes, insulation materials, vermiculite, cement, and talc. When the mineral fibers are handled, they can be released into the air and be inhaled, because of their microscopic size and fibrous nature, which can lead to asbestos accumulating in the lungs and causing respiratory illness. Exposure to asbestos has been associated with adverse health effects such as lung cancer, asbestosis  and mesothelioma.

Asbestos Fibers and Other Elongate Mineral Particles: State of the Science and Roadmap for Research
DHHS (NIOSH) Publication Number 2011-159 (March 2011)
This document is intended as one step in the process. NIOSH intends to pursue partnerships with other federal agencies and stakeholders to help focus the scope of the research that can contribute to the scientific understanding of asbestos and other mineral fibers, to fund and conduct the research activities, and to develop and disseminate educational materials describing results from the mineral fiber research and their implications for occupational and public health policies and practices.

Draft Document for Public Review and Comment: Asbestos and Other Mineral Fibers: A Roadmap for Scientific Research(https://www.cdc.gov/niosh/docket/archive/docket099c.html)
This NIOSH Docket Archive contains all draft versions, comments on the draft documents and NIOSH responses and other materials that contributed to the development of the final publication.

Asbestos Bibliography (Revised)
DHHS (NIOSH) Publication No. 97-162 (1997)
Compendium of NIOSH research and recommendations on asbestos. It updates and supersedes the NIOSH document Asbestos Publications from June 1992.

Current Intelligence Bulletin #31: Adverse Health Effects of Smoking and the Occupational Environment(https://www.cdc.gov/niosh/docs/1970/79122_31.html)
DHHS (NIOSH) Publication No 79-122 (1979)
Identifies six ways in which smoking can interact with workplace exposures, including asbestos.

Revised Recommended Asbestos Standard
DHHS (NIOSH) Publication No. 77-169 (1976)
Review of information on the health effects of exposure to asbestos.

Criteria for a Recommended Standard: Occupational Exposure to Asbestos
DHHS (NIOSH) Publication No. 72-10267 (1972)
Presents the criteria and standards for preventing occupational diseases arising from exposure to asbestos dust.

NIOSH Manual of Analytical Methods (NMAM), 4th edition
DHHS (NIOSH) Publication No. 94-113 (1994)
NMAM is a collection of methods for sampling and analysis of contaminants in workplace air, and in the blood and urine of workers who are occupationally exposed. These methods have been developed or adapted by NIOSH or its partners and have been evaluated according to established experimental protocols and performance criteria. NMAM also includes chapters on quality assurance, sampling, portable instrumentation, etc.

An Evaluation of Glove Bag Containment in Asbestos Removal
NIOSH Publication No. 90-119 (1990)
Examines the effectiveness of the glove bag control method to prevent asbestos emissions during the removal of asbestos-containing pipe lagging.

Protect Your Family: Reduce Contamination at Home
DHHS (NIOSH) Publication No. 97-125 (1997)
This report summarizes a NIOSH conducted a study of contamination of workers’ homes by hazardous substances transported from the workplace.

Through the NIOSH Worker Notification Program , NIOSH notifies workers and other stakeholders about the findings of past research studies related to a wide variety of exposures. The link below presents archival materials sent to participants in a study at an asbestos textile, friction, and packing plant who were exposed to asbestos.

Proceedings of the VIIth International Pneumoconioses Conference Part I
NIOSH Publication No. 90-108 Part I (1990)

NIOSHTIC-2 Search Results on Asbestos
NIOSHTIC-2 is a searchable bibliographic database of occupational safety and health publications, documents, grant reports, and journal articles supported in whole or in part by NIOSH.