A 17-year-old male died when he became trapped in a hay baler that caught fire. The farm worker was working alone baling dried wheat straw for hay. Evidence suggests that the round hay baler became jammed (plugged), and the clutch temporarily shut down the power take-off device (PTO). The worker apparently climbed on top of the baler to clear the jammed wheat straw by using his feet. The jam cleared, and the clutch put the PTO back into motion. The baler rollers suddenly started moving and trapped the worker’s leg inside the baler. The rollers and belts spinning around the hay started a fire. A neighbor passed the field, noticed the fire, and notified the worker’s father of the fire. The worker’s father notified the fire department and went to the field. The father uncoupled the baler and moved the tractor away from the burning hay baler. The father then found his son (the worker) suspended in the baler. The worker died at the scene from smoke inhalation and burns.

FACE investigators concluded that, to prevent similar occurrences, employers (including persons who are self-employed) should:

In June 1998, a 17-year-old male died when he became trapped in a hay baler that caught fire. On June 22, 1998, the Oklahoma Fatality Assessment and Control Evaluation (OKFACE) project at the Oklahoma State Department of Health (OSDH) received a newspaper clipping regarding the fatality. On June 25, the OKFACE field investigator interviewed the County Undersheriff who had investigated the scene of the fatal incident. Photocopies the photographs of the machinery taken at the time of the incident were given to the OKFACE investigator. A medical examiner’s report and death certificate were obtained.

Little is known about the employer; only that he had hired the worker to custom bale dried wheat straw. The worker was a full-time student who was working for the summer. The worker used his father’s equipment (tractor, PTO, and round hay baler) to do the baling. The worker had a couple of years experience working with his family. How long he had worked by himself was unknown. There were no written safety programs. Safe operation procedures and formal job training were not addressed.

The farm worker was hired to custom bale dried wheat straw for a neighbor. He was using a tractor equipped with a PTO-driven round hay baler that belonged to his family. On the clear day, the farm worker had baled 6-7 bales prior to the fatal incident. Evidence suggests that he had an incomplete bale of wheat straw in the baler when the baler plugged. The tension from the plugged wheat straw caused the baler’s slip clutch to temporarily shut off the PTO. The farm worker apparently dismounted the running tractor and climbed on top of the baler to kick the plugged wheat straw through while the PTO was still engaged. Apparently, he successfully unplugged the baler, and the slip clutch put the still engaged PTO into motion. The spring tension rollers were not covered, and the farmer worker was partially pulled down into the baler when the PTO was set into motion. The prolonged baler operation while the farmer worker was caught in the baler produced enough friction between the belts and wheat straw or in a bearing to cause the wheat straw to catch fire. The bale in the baler, the baler’s belts, and the farm worker all caught fire.

The medical examiner listed the cause of death as smoke inhalation.

Recommendation #1: Employers (including persons who are self-employed) should ensure that safe work practices are followed, including disengaging the PTO and shutting off the engine, prior to working on agricultural machinery.

Discussion: Serious injury and death can be caused by taking shortcuts while performing routine tasks. Often with farming operations, time equates to money, but the time it takes to do a task safely can ensure that the task is completed without causing harm. Work should be performed with shields and safety guards in place. Safe work practices include always disengaging the PTO, shutting off the tractor engine, setting the park brake, and even removing the tractor key before performing service, inspection, or unplugging the baler. The disengagement of the PTO and shutting off the engine of the tractor before contact was made with the baler may have prevented the death.

Recommendation #2: Employers (including persons who are self-employed) should ensure that machinery is maintained and operated according to manufacturer’s specifications, including adjusting the baler pick-up height for correct ground clearance and adjusting the ground speed with the crop conditions and windrow size.

Discussion: In this incident, the baler became plugged. To avoid baler problems, the baler should be operated in accordance with the manufacturer’s specifications. This includes, in part, adjusting the baler pick-up height and correct PTO speeds. Other considerations include traveling at a speed at which the baler can handle with the width and size of the windrow and ground conditions. Proper baler maintenance and adjustments will allow the baler to work safety, efficiently, and reliably. Chains, bearings, belts, rollers, pickup teeth, twine tie mechanism, windguard, and other components all need proper maintenance. Proper maintenance and operation will decrease the incidents of plugging. Conditions that lead to plugging, such as late season weeds, weather, and moisture content of the crop, should all be considered before baling and extra time allotted to perform the task.

Recommendation #3: Employers (including persons who are self-employed) should provide workers who work alone with a means of remote communication for use in cases of emergency.

Discussion: The outcome of traumatic injury is greatly dependent on the timely treatment of shock and surgical intervention. Remote communication by means of cellular telephones or two-way radios could provide the vital link to activating emergency medical services. Personal contacts may also be helpful, particularly if they are frequent and/or occur shortly after the injury. Additionally, first response is often critical in farming incidents that involved injury. Many times such incidents occur in remote locations and may involved entrapment. Many bystander care programs are designed to teach rural residents how to recognize an emergency, decide to help, activate emergency medical service, prevent further injuries to the subject or bystanders, and provide basic care. It is unknown if the neighbor who noticed the fire could have prevented the farm worker’s death by investigating the scene and providing bystander care, instead of reporting the fire to the farm worker’s father. 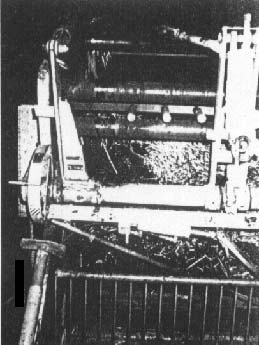 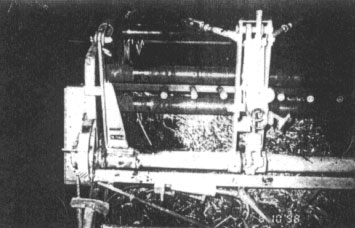 Figure 2. Close up of entrapment area.