On December 15, 2000, the driver of a trash-container truck, returning to the employer’s building at the end of his work day, drove the truck onto a service road located between a building and railroad track. Driving around obstacles in the road, the driver steered the truck too close to a passing freight train. The truck was struck by the train and pulled along by a flat bed railroad car. After being dragged by the train, the truck broke free, veered to the right, and struck a parked backhoe. A 32-year-old laborer, who was standing behind the backhoe, was killed when he was pinned and crushed between the backhoe and a dumpster.

NJ FACE investigators concluded that, to prevent similar incidents, these safety guidelines should be followed:

A federal OSHA compliance officer informed the New Jersey FACE staff about this work-related fatal injury on December 19, 2000. It was initially thought to be a machine-related incident. A concurrent site visit was conducted with federal OSHA on January 3, 2001. The company manager and several employees were interviewed. The driver of the truck involved in the incident declined to be interviewed. Additional information was received from the county medical examiner, federal OSHA, the company’s insurer, and the police.

The employer was a company with two divisions at the same location and under the same management. One division was involved in hauling and trucking, including trash collection, and the other was a recycling center that was building a facility at the site to process construction and demolition materials. The hauling and trucking division was unionized; the recycling division was not. The company had been taken over by the present owners eight months prior to the fatal injury. There were 57 workers employed by the two divisions. There was no written safety and health policy. The company had a drug and alcohol-testing program in place. There was no formal training program. Reportedly, a verbal company policy specified that no work was to be done in the area behind the building while a train was moving on the railroad tracks.

The victim was a laborer who had been employed at the site for six years. He currently worked for the recycling center. His native language was Spanish and he had limited English-speaking ability. 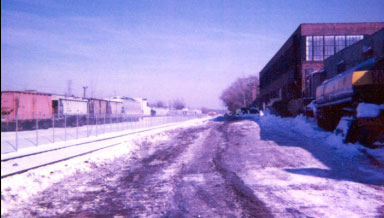 The site of the incident was the rear of a brick building, owned by another company, adjacent to the one occupied by the employer. The management permitted the victim’s employer to store containers behind the building and their workers to occupy the area. Several dumpsters/trash containers were stored there. A railroad track ran 40 feet behind, and parallel with, the building. A dead-end dirt and gravel service road ran between the building and the track, with the road slanted toward the track. Beyond the track were a three-foot ditch and a fence.

Work had started at 7:00 a.m. It was now after 4 p.m., the beginning of dusk in the early winter. The weather was clear and cold. There were no lights in the area. The victim, wearing a reflective vest, and his supervisor were working alone behind the building. They rigged a damaged ten-cubic-yard container to the loader end of a backhoe with chains so they could move the container to the front of the building. A freight train with 121 rail cars was moving on the track at an unknown speed. The victim’s supervisor told him to stop work until the train had gone through. He stood behind the backhoe and in front of the trash container and waited for the train to pass.

At approximately 4:15 p.m., a truck driver drove a 36-foot-long roll-off truck, with a 30-cubic-yard container, into the yard adjacent to the front of the building. He planned to drop off the container, finish his shift, and receive his pay. The 57-year-old driver had been employed as a tractor-trailer driver with the company until six weeks prior to the incident. He was then assigned to drive the roll-off trucks while the recycling facility was being built. He had 37 years of experience as a truck driver but was reportedly less skilled at maneuvering the roll-off truck than the tractor-trailer. As the truck proceeded through the yard, it passed too close to another container truck parked near a dumpster. The door latch on the left rear of his container caught onto the right rear of the parked truck and became stuck. The supervisor helped him maneuver free of the second truck.

It is unclear what instructions were given to the driver after his truck was untangled from the second vehicle and before he drove onto the service road. The supervisor stated that he cautioned the driver to wait and not proceed until the train had passed. The driver stated that he was told to proceed. After the truck was freed, the driver turned right at the rear corner of the building to reach the service road. It traveled approximately 80 feet, with its lights on, on the service road, parallel with the track on which the train was traveling. The truck and train were travelling north and most of the train had passed. There were eight dumpsters (4 and 8 yard size) located behind the building, which made part of the access way only 10 feet, 6 inches wide. The widest part of the truck was 8 feet, 6 inches and its height was 9 feet, 4 inches from the ground to the top of the container. 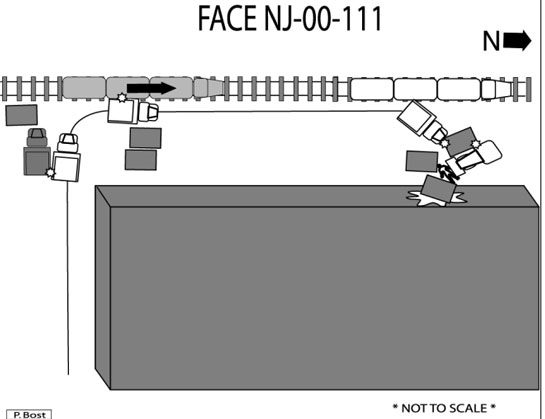 The driver steered to the left to go around the containers in the road. He stopped the truck since he couldn’t proceed further because the roadway was blocked by a container filled with paper. The truck was apparently leaning to the left, toward the train, because of a slant in the road. A rail car then hit the back of the truck. The truck was pulled along by the train for approximately 135 feet. Its roll-off container was pulled off of its base on the truck and turned 180 degrees.

The rear of the truck was lifted more than 12 inches from the ground and pushed forward. The train tipped and its emergency braking system went into operation when several rail cars uncoupled, causing the train to stop. The truck’s front tires were turned to the right, possibly in an attempt to break free from the train. When the truck finally broke free from the train, it turned to the right and struck the backhoe, which in turn struck the trash container and pushed it through the brick wall of the building. The victim was crushed between the backhoe and the container.

Police and emergency services were called at 4:34 p.m. and the victim was pronounced dead at the scene at 4:56 p.m.

Recommendation #1: Employers should conduct a job hazard analysis; policies and training should be implemented based upon the findings of the analysis.

Discussion: A job hazard analysis is a procedure used to review each job, identify potential hazards, and design actions and procedures to eliminate or control the hazards. Input from workers who usually perform the tasks is important. Of primary importance is the recognition that hazards exist. Company policies and training should be designed based upon the findings of the job hazard analysis. An employer may need the assistance of a safety consultant if he is unable to conduct the analysis.

The company had no written policy or training concerning working in the area adjacent to the rail line. Although it was reported to be a standard operating policy that no work was to continue while trains were passing, it apparently had actually been a policy of the business previously located at the site. Interviews of workers by the federal OSHA compliance officer revealed that the policy was not enforced and that some workers were unaware of the policy. On the day prior to the fatal injury, work had continued at the back of the building while a train was moving through the area. Company safety and health policies, including standard operating procedures, should be in writing and be based upon the results of the job hazard analysis.

Recommendation #2: The employer should limit work in the area around the rail road tracks while a train is present.

Discussion: There was no barrier to prevent access to the railroad track by workers, equipment, or persons who might pass through the area. Storing containers and equipment in the access way compounded the hazard because the truck needed to steer toward the tracks to navigate around the equipment stored in the access way.

The company has removed all containers and equipment from the area between the building and the railroad tracks. They plan to build a wall, with a door, across the service road. The only access to the area will be through the door, which will be locked at all times and will be opened only by a supervisor when it is necessary for maintenance of the area behind the building.

If employees again need to work in the area, the company should consider erection of a fence that will block access to the rail road tracks. The company has instituted a policy that an employee is no longer allowed to enter the area behind the building without supervision and has instituted a program to educate and remind workers of the dangers of this site.

Discussion: It is extremely important that employers obtain accurate information on safety and applicable OSHA standards. The following sources of information may be helpful:

U.S. Department of Labor, OSHA
Federal OSHA will provide information on safety and health standards on request. OSHA has several offices in New Jersey that cover the following counties:

NJDOL Occupational Safety and Health On-Site Consultation Program
Located in the NJ Department of Labor, this program provides free advice to private businesses on improving safety and health in the workplace and complying with OSHA standards. For information on how to get a safety consultation, call:

Staff members of the New Jersey Department of Health and Senior Services, Occupational Health Service, perform FACE investigations when there is a report of a targeted work-related fatal injury. The goal of the FACE Program is to prevent injuries by studying and identifying the risk factors that contribute to workplace fatalities, by recommending intervention strategies, and by disseminating information to employers and employees. NJ FACE data is reported to NIOSH for trend analysis. All identifiers are removed from the FACE reports and other data to protect the confidentiality of those who participate in the program.