On April 3, 2003, a 62-year old forging company co-owner died when a solid metal cylinder he had placed on the stripping plate of a full-revolution press struck him in the chest when the press cycled. The firm was initiating a new operation – trimming a rubber boot to protect steering linkages from dirt and other contamination. The die set had been purchased from the company from which the forging company had previously outsourced this operation. The forging company did not purchase the press in which the die set was used. The victim installed the die set in the “bender” press; a full revolution press (See Figure 1). The “bender” was selected because the bed size of the “bender” was appropriate for the die set. One rubber boot trim run had been performed, but the boot was not completely trimmed; hand trimming was necessary. The victim placed a piece of solid, cylindrical steel, measuring 4” long, 1 7/8” diameter on the front edge of the die stripping plate to act as a stop block. The victim activated the “bender” by pressing the dual palm buttons without removing the steel cylinder. He may have sat down in front of the press on a stool. When the ram came down, it contacted the cylindrical piece of steel. When the ram contacted the steel, it caused the stripping plate to unevenly depress at an angle toward the victim instead of horizontally. This caused the piece of steel to be forcefully ejected from the press and strike the victim in the chest. The co-owner working in a different shop area heard two loud noises, turned, and saw the victim fall to the ground. Another worker called 911 while the co-owner initiated CPR. Emergency response arrived and transported the victim to a local hospital where he died.

On April 3, 2003, a 62-year-old forging company co-owner died when a piece of steel struck him in the chest when a full revolution press cycled. On Friday, April 4, 2003, MIFACE investigators were notified of the fatality by a newspaper article. Later that day, MIFACE was informed by the Michigan Occupational Safety and Health Act (MIOSHA) personnel, who had received a report on their 24 hour-a-day hotline, that a work-related fatal injury had occurred on April 3, 2003. On June 5, 2003, the MIFACE researcher interviewed the co-owner who was also working in the shop at the time of the incident. At the time of the interview, the co-owner escorted the MIFACE researcher into the shop where she was able to observe and take pictures of the steel that struck the victim, the die and press involved in the incident. The company permitted a follow-up visit by the MIFACE researcher to photograph the safety block and press guard. During the course of writing the report, the autopsy results, death certificate, police report, and the MIOSHA citations were obtained.

The company was issued 4 alleged serious citations. Three citations were for violations of Part 24, Mechanical power Presses. Part 24, Rule 2463 requires the distance between each two-hand trip and point of operation be greater than the distance determined by the formula prescribed in Rule 2463(8)(c) on full revolution clutch presses; the distance between the trips and the press did not meet the minimum safety distance. Part 24, rule 2476 requires that dies be fastened securely; the upper dies of the press were inadequately secured. The third citation involving Part 24 was a violation of rule 2477(4) that required means to prevent cycling of the press during die repair with safety blocks in place; the firm was not enforcing lockout when the victim was making repairs to dies in the press and using a die block (4” long, 1 7/8” diameter cylindrical steel referred to in Summary) that was not interlocked. The fourth citation concerned the Control of Hazardous Energy Sources, Part 85, Rule 1910.147(c)(4)(i) adopted by Rule 8502 required the development, documentation and utilization of procedures for the control of potentially hazardous energy when employees are engaged in service or maintenance of machines or equipment where unexpected energization, start-up or release of stored energy could occur. There were no machine-specific procedures established for the press that the victim was working on.

The company has been in business for 15 years, specializing in steering linkage for heavy equipment. The company had 3 employees, one office worker and the co-owners who both worked in the shop to form the product line. The victim worked full time, approximately 8-hour days. He had at least 44 years of experience operating a press. The victim had worked 7 years at this site. The company had a written health and safety program, including lockout/tagout. The victim had worked at various companies during his work history and had a great deal of experience in setting up dies and operating many different types of presses, including full revolution presses. At a previous place of employment, he had received over 2000 hours of press operation time and had been classified as a full revolution press operator. Press inspections had been performed and documented.

The rubber boot, which protects the steering bearings from dirt and other contaminants, was loaded manually by hand into the press. To activate the clutch, two palm buttons must be depressed simultaneously. When the clutch is tripped and the flywheel engaged it cannot be disengaged until the crankshaft completes its full revolution. An emergency stop button cannot stop the downward and upward strokes of the ram once the crankshaft is engaged; the ram will complete the entire revolution and return to the start (up) position. 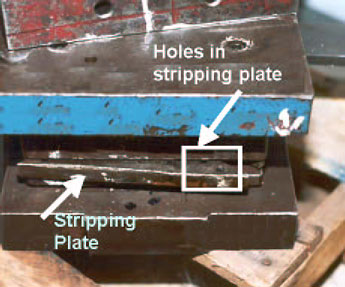 The first run produced defective parts; the rubber was not completely trimmed from the boot and needed further hand trimming. To correct this problem, the victim had taken the dies out of the press and sharpened them. The fatal incident occurred when he restarted the press after he installed the sharpened dies. It appears the victim had placed a cylindrical piece of solid steel 17/8” in diameter and 4” long on the top edge of the stripping plate, nearest to him (See Figure 3). He was using the steel as both a measurement tool for the die and as a stop block to ensure that the top ram would not go down too far (bottom out) on the lower die pins.

Because of the location of the piece of steel on the stripping plate and the downward force of the ram, the chunk of steel was propelled from its position on the stripping plate at a high velocity away from the press, toward the victim. Figure 5 shows the deformation of the cylindrical piece of steel caused by the force of the press. The piece of steel struck him in the chest. The co-owner was working approximately 20 feet away. He heard two bangs; heard the victim yell and looked over to see the victim on the ground. The co-owner provided CPR while the office worker called 911. Emergency response arrived and transported the victim to the hospital, where he died of his injuries.

The cause of death as stated on the death certificate was blunt force injuries of the chest. The results of all toxicological tests were negative.

MIFACE (Michigan Fatality and Control Evaluation), Michigan State University (MSU) Occupational & Environmental Medicine, 117 West Fee Hall, East Lansing, Michigan 48824-1315. This information is for educational purposes only. This MIFACE report becomes public property upon publication and may be printed verbatim with credit to MSU. Reprinting cannot be used to endorse or advertise a commercial product or company. All rights reserved. MSU is an affirmative-action, equal opportunity employer. 11/14/03