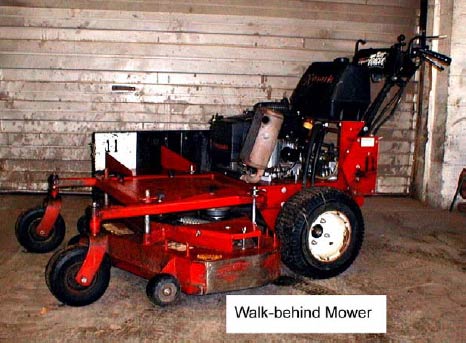 On May 30, 2002, a 30-year old landscape mowing assistant collapsed and died at the end of a day of caring for residential lawns. A typical day’s work consisted of mowing, edging, trimming with a weed whip, and finishing with a back-pack blower. His partner, the leader of the two-man crew, witnessed his collapse and immediately called for help. Emergency medical assistance responded and he was transported to the hospital where he was pronounced dead. At the hospital, a rectal temperature of 107.6 degrees Fahrenheit was recorded.

On May 30, 2002, a 30 year-old male died from hyperthermia (heat stroke) due to a multiple drug intoxication at the end of his work day. On July 5, 2002, MIFACE investigators were notified of the possible heat stroke fatality by the Occupational Health Division of Michigan Occupational Safety and Health Act (MIOSHA). On October 25, 2002, the MIFACE investigator interviewed the owner of the landscape company. The owner accompanied the investigator into the company’s garage area and showed her equipment typical of that the employees would have been using. In preparation for writing the report, the autopsy results were obtained from the medical examiner’s office.

MIOSHA did not investigate the fatality. 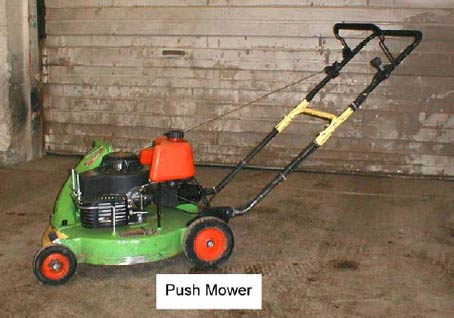 On May 30, 2002, a 30-year old landscape mowing assistant collapsed and died at approximately 5:00 p.m. at the end of a day of caring for residential lawns. He had complained to his partner at their prior location that he felt light-headed and short-of-breath at about 3:00 p.m. At that time his partner brought him water and offered to get him help, but he refused assistance indicating he would be fine. A typical day’s work consisted of mowing, edging, trimming with a weed whip, and finishing with a back-pack blower. The victim had mowed the lawn with a walk-behind mower. They proceeded in the company vehicle to their next site about 5 to 10 minutes away. The company vehicles are air-conditioned. It is not known whether or not the air-conditioning in their vehicle was operating as they drove to their next destination. The maximum temperature on May 30, 2002, was 81 degrees Fahrenheit.

The team had two relatively small residential lawns to take care of at their next location. The work took approximately 30 minutes to complete. The victim mowed these lawns with a gas-powered push mower. As he was descending the stairs of one of the residences after leaving the company report, he collapsed to his knees and lost consciousness. His partner immediately called for help. The victim was treated by EMS personnel at the site, then transported to the hospital where he was pronounced dead. At the hospital, a rectal temperature of 107.6 degrees Fahrenheit was recorded.

Each residential-care two-man team consisted of a leader (the partner) and a mower (the victim). The teams were given their work assignments by a manager. The interviewer was not able to talk to the victim’s partner, nor the victim’s manager. The following information has been obtained by the MIFACE interviewer from others who had talked to the victim’s partner after the incident. The victim’s partner indicated that sometimes the victim would eat his lunch quickly, then vomit. The victim also took medication. On the day of the incident, his partner asked him if he had taken his medication, and the victim indicated that he had not. The victim arrived at the hospital with what was described as “two layers of clothing”. Another person indicated that the “two layers of clothing” were two sets of work pants. When the victim had complained of shortness of breath at the first site and at the time of his collapse at the second site, his partner had not described noticing the victim displaying profuse sweating or flushed or extremely dry skin.

After the incident, the landscape company made arrangements to have training conducted regarding heat stress/strain and heat-related illnesses for all its employees. The training class lasted approximately one hour and was completed approximately three weeks after the incident. The training was conducted in English and translated into Spanish for workers for whom English was not their primary language. Two of the company’s employees are bilingual and translated the literature for the Spanish-speaking employees.

The cause of death as stated on the death certificate was hyperthermia (heat stroke) due to a multiple drug intoxication. There were no injuries or disease processes present that contributed to death. Chemical analysis of the decedent’s blood performed after death revealed a toxic level of fluoxetine and the presence of quetiapine. The results of two blood samples one from the heart and one from the femoral vein indicated 2.1 and 0.15 micrograms per milliliter (mcg/mL) fluoxetine, respectively. No illegal drugs nor alcohol was found. Therapeutic levels of fluoxetine range up to 0.4 micrograms per milliliter. Levels from 1-6 micrograms per milliliter have been associated with death, although at the lower end of the range other medication or alcohol was also reported to be present. Quetiapine is an antipyschotic medication. This class of medication, although not this particular medication, has previously been associated with problems in body temperature regulation. The manufacturer of Quetiapine warns, “Appropriate care is advised when prescribing Quetiapine for patients who will be experiencing conditions which may contribute to an elevation in core body temperature, e.g., exercising strenuously, exposure to extreme heat, receiving concomitant medication with anticholinergic medication or being subject to dehydration.”

Employers should ensure that supervisors/managers monitor workers during periods of high heat stress/strain.

The American Conference of Governmental Industrial Hygienists (ACGIH), the National Institute of Occupational Safety and Health (NIOSH), and the Federal Occupational Safety and Health Administration (OSHA) recommend monitoring of workers during periods of high heat stress/strain. Monitoring of workers consists of activities such as observing the workers at the beginning, during and at the end of the day and checking to ensure they are supplied with and consuming adequate amounts of fluids. The different forms of heat-related illnesses – heat rash, heat cramps, heat exhaustion, heat stroke – are points along a continuum of severity. Heat stroke is the most extreme form of heat-related illness. If an individual shows signs of one form of heat-related illness, it implies they will develop a more severe form if no intervention/relief occurs. The presence of any form of heat-related illness is an indicator that exposure controls are inadequate.

Identify workers who take medications or who have medical conditions that would predispose them to heat-related illnesses.

Many therapeutic and social drugs can have an impact on a worker’s heat tolerance. Workers who are taking medication or have certain underlying health conditions and their supervisors/managers should be aware that some drugs and medical conditions exacerbate dehydration and increase the risk of heat-related illness. In general, the very young, the very old, the infirm and those in ill health are at greater risk of heat-related illnesses. Employees with risk factors for heat stress/strain should be evaluated by a health care provider on their fitness to work in a hot environment.

Training should be conducted in early spring, because sudden changes in weather may result in dangerous heat strain levels. Workers should be aware of the hazards of working vigorously in hot conditions before they are exposed to hot conditions, because they may not have had time to become physically and psychologically acclimated to (adjusted to) the heat. Lack of acclimatization places workers at risk of heat-related illnesses during brief, unexpected periods of high heat, because acclimatization is one of the major factors in determining how well an individual is able to respond to heat stress.

It generally takes five days of working at least 1½ hours/day in a particular environment before the body becomes acclimated. Some acclimatization can be lost in as little as 3-4 days if the individual is exposed to a substantially different environment. To protect workers while developing acclimatization, NIOSH recommends new workers should be exposed to work in heat 20% on day 1 with a 20% increase each subsequent day. For workers who have had recent previous experience with the job, NIOSH recommends 50% exposure on day 1, 60% exposure on day 2, 80% on day 3 and 100% on day 4. Normal, healthy individuals can become gradually acclimatized to work in hot conditions in 5 to 10 days depending upon the degree of heat and humidity, their general health and their work schedule.

The ACGIH has published a work/rest regimen based upon a heat stress/strain assessment that “represents conditions under which it is believed that nearly all adequately hydrated, unmedicated, healthy workers may be repeatedly exposed without adverse health effects.” The assessment is based upon a wet bulb, globe temperature (WBGT) index and general work demands.

The WBGT values are calculated using one of the following equations:

According to ACGIH, because WBGT is only an index of the environment, the screening criteria are adjusted for the contribution of work demands and clothing as well as state of acclimatization. The following table provides WBGT criteria suitable for screening purposes for workers in light summer clothing. For other than light summer work clothes, values must be adjusted.

Ensure all employees are able to recognize the signs and symptoms of heat-related illness in themselves and in others.

The signs and symptoms of heat stress/strain leading to heat-related illnesses are well-recognized and well-documented. Workers should be aware of these indicators to protect themselves and anyone in whom they recognize the signs. Workers are often reluctant to admit to feeling bad, because they think it may be perceived as a sign of weakness. It may be necessary for others who suspect something is wrong to take control of the situation. Knowledge gives one the confidence one needs to step into such a situation.

Stress the importance of drinking nonalcoholic beverages before, during and after working in hot conditions.

The most easily controlled factor in heat tolerance is hydration of workers. Providing convenient and copious amounts of fluids to workers is considered one of the most important precautions to prevent heat-related illnesses. Consumption of approximately one pint of water every 15 to 20 minutes is suggested for most people at risk of heat strain. Urine should be clear, not dark.

When hydration is maintained, workers seem to be able to undergo several successive days of intense heat exposure without obvious cumulative adverse effects. Thirst alone cannot be relied upon to insure that adequate amounts of fluids are consumed.

Monitoring of body weights of workers chronically exposed to hot environments is a method for ensuring that sufficient fluids are being consumed. NIOSH suggests that body weight loss in a workday should not exceed 1.5%. This is a difficult range to maintain when doing work that causes heavy sweating. Regardless, rehydration should be complete before starting the next day’s work.

Periodically remind workers of the signs of heat-related illness and encourage them to drink copious amounts of water during hot conditions.

Recognizing heat-related stress, strain, and illness and knowing what measures to take is not common sense. Once the workers have been trained, reinforcement is necessary to ensure that they do not become complacent nor forget what they have learned. Highly trained personnel receive retraining and practice at regular intervals to ensure they remain at the top of their skills. Reinforcement of the importance of watching for, recognizing, and knowing how to react to heat-related illnesses is an element of the training that should not be overlooked.

MIFACE (Michigan Fatality and Control Evaluation), Michigan State University (MSU) Occupational & Environmental Medicine, 117 West Fee Hall, East Lansing, Michigan 48824-1315. This information is for educational purposes only. This MIFACE report becomes public property upon publication and may be printed verbatim with credit to MSU. The author of this report is working under contract to MSU and is affiliated with Wayne State University. Reprinting cannot be used to endorse or advertise a commercial product or company. All rights reserved. MSU is an affirmative-action, equal opportunity employer.