On December 22, 1999, a 36-year-old male second shift foundry manager (the victim) was fatally injured while cleaning the die of a cold chamber die cast machine. The foundry’s quality control inspector had notified the victim that one of the die cast machines was producing castings with a blemish on the exterior surface. The victim entered the machine operating area and leaned in-between the two sections of the die to clean them. The machine cycled to the closed position bringing the two sections of the die together while he was still in-between them. The city police and fire departments were notified immediately and arrived within minutes securing the scene of the incident. The medical examiner was notified and upon arrival at the incident site pronounced the victim dead. The MA FACE concluded that to prevent similar occurrences in the future, the employer should:

On December 28, 1999, the MA FACE Program was notified by a local health department through the 24-hour Occupational Fatality Hotline that on December 22, 1999, a 36-year-old male foundry worker had been fatally injured when he became caught in a die cast machine. An investigation was immediately initiated. The MA FACE Program Director and an investigator traveled to the job site where the vice-president of the foundry was interviewed. The police report, death certificate, corporate information, OSHA fatality/catastrophe report, employer interviews and photographs of the machine involved were obtained during the course of the investigation.

The employer, a foundry, had been in business approximately 97 years at the time of the incident. The foundry employed approximately 135 people in Massachusetts, 25 of whom were working the second shift at the time of the incident. The company had approximately 332 additional employees divided between two out of state locations and one location out of the country. The company’s headquarters was located at the incident site, which the company had occupied for approximately thirty years. The vice president of the foundry was also in charge of employee safety at this location. The vice president attended a national manufacturer’ organization’s train-the-trainer class to obtain training videos and written information on the safe and proper use of die casting machines. The foundry had its own written safety procedures that were general and not machine or task specific. They also had a written hazardous energy control program with a lockout/tagout procedure that was not adequate or enforced. There was a safety committee at this site with rotating members including supervisors and laborers

The victim had been employed by the foundry for approximately eighteen years at the time of his death. For the last eight years he was the second shift site manager. His training was primarily on-the-job with the company providing additional training through the videos and written information from the national manufacturer organization.

The operation of the die casting machine began with an automated process of ladling molten metal from the crucible furnace into the cold chamber. The molten metal was then injected through a port into the closed and locked die by the forward motion of a hydraulic plunger. The plunger sealed the port of the stationary section of the die to keep the molten metal inside the die at a high pressure. The beryllium and copper plunger tip contracted in size with the cooling of the molten metal. The cooling molten metal process was accelerated with a water-based cooling system. The plunger retracted when sufficiently cooled, releasing the die pressure and the die casting machine would cycle to the open position. The automatic extractor consisted of a long arm with a tong-like end that reached into the machine in-between the two dies and grasped a knob on the casting, pulling it out of the machine and placing the casting’s hanger on the cooling rod. The machine would then close starting the cycle again.

On the night of the incident, the foundry’s second shift crew consisted of approximately 25 employees, mostly laborers. There were approximately 10 machines operating, which included a number of die casting machines. The work area where the incident took place was approximately 30 feet long by 30 feet wide, very dimly lit and contained an uneven concrete walking surface. The area contained three die cast machines. At the time of the Massachusetts FACE investigation none of the three die cast machines were running, but the background noise within the work area was still loud enough to make verbal conversation difficult.

At the time of the Massachusetts FACE investigation the employer had welded the two fixed sections of the perimeter guard together eliminating the possibility of entering the machine operating area between these two sections. During the investigation it was revealed that the company did not strictly enforce the lockout/tagout procedure when cleaning the dies during the normal operation of the machine. In addition the vice president of the company revealed that the die cast machine’s plunger tip would occasionally stick and cause the die casting machine to stop. It was unknown if this occurred at the same time and contributed to the incident.

The city’s police and fire departments were notified immediately. When police and fire personnel arrived they secured the scene of the incident. The medical examiner was notified and upon arrival pronounced the victim dead.

The medical examiner listed the cause of death as multiple trauma.

Recommendation #1: Employers should enforce comprehensive hazardous energy control program including a lockout/tagout procedure and constantly review and update the program and training.

Discussion: OSHA regulation 1910.147 requires that employers establish procedures for isolating machine or equipment from the input of energy by affixing appropriate locks or tags to energy isolating devices. This is done to prevent any unexpected energization, start-up or release of stored energy that would injure workers during servicing and maintenance of machines and equipment. All forms of energy must be considered including electrical, hydraulic, pneumatic, and mechanical. Therefore, for each machine an individual lockout/tagout procedure is needed that specifies the requirements to properly perform lockout/tagout on that machine and when the lockout/tagout should be implemented, such as while cleaning the dies of a die cast machine.

Few maintenance procedures require the die cast machine to cycle in order to complete the task. The NADCA Machine Safety Requirements section 8.3 states “When motion of the die casting machine is required for maintenance, it shall occur in manual mode at a speed that is less than full machine speed. Any motion that creates a hazard within the operator’s reach in manual mode shall be controlled with a two hand control device.” Section 8.3 should be used only as a last resort safety precaution if the maintenance procedure cannot be completed without cycling of the die cast machine. The maintenance procedure should be performed with the machine in the lockout stage until the phase is reached when motion of the machine is needed. Then the NADCA Machine Safety Requirement section 8.3 should be implemented.

Recommendation #2: Employers should ensure that new safety devices are installed properly and effective before implemented them.

Discussion: Approximately, four months prior to the incident an automatic extractor and a perimeter guard which was connected to the already existing interlock were added to the die casting machine. To install the automatic extractor, the operator’s door, which was originally connected to the interlock, had been placed permanently in the open position with the interlock disconnected. Before placing the machine back in service a thorough inspection may have identified that the perimeter barrier was not installed properly. The two abutting fixed sections of the perimeter guard were not secured together allowing access to the machine operating area while bypassing the gate and interlock system.

In addition, an inspection may have identified that the 48-inch height of the perimeter guard was not high enough to deter employees from climbing over the guard and bypassing the interlock system. A perimeter guard that is at least 8 feet high or a cage that enclosed the entire machine would be a better safety system. It would prohibit entry to the machine operating area when the interlock system was not engaged.

Recommendation #3: Employers should obtain information from the die cast machine manufacturer on the proper way to controlling hazardous energy when purchasing a used or remanufactured machine.

Discussion: When machines are purchased used or remanufactured, as in this case, the employer should contact the machine’s manufacturer for suggestions on the appropriate hazardous energy control procedure including lockout/tagout for that particular machine. Also, before modifying a machine with new equipment, such as an automatic extractor, the employer should contact the machine’s manufacturer and the manufacturer of the new equipment to obtain their recommendations about the modification and any additional safety precaution that should be taken either in the operation of the machine or the controlling of hazardous energy. 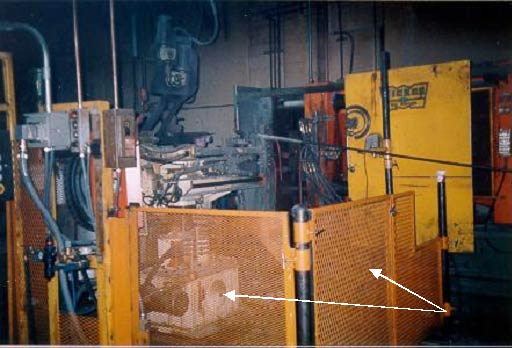 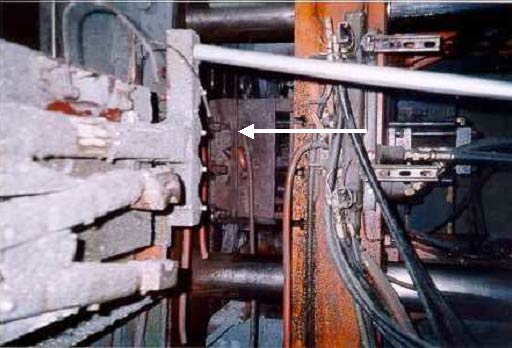 Figure 2 – The Die Casting Machine’s Die.
The arrow points at the location where the two sections of the die come together.