On September 13, 2002, a 26 year-old male Hispanic migrant worker (decedent) died when the tractor he was driving on a country roadway overturned. The decedent had experience driving the tractor in a field, but did not have experience driving it on a public roadway. On the afternoon of the incident, the decedent drove the tractor, pulling a wagonload of tobacco, from the farm where it had been harvested to the tobacco barn one mile away. The road was hilly and had a sharp curve to the right at the bottom of the hill. As the decedent drove the tractor pulling the wagon down the hill, the wagon jackknifed and broke loose from the tractor. The tractor slid sideways, flipped over, slid around the curve and came to rest with the decedent underneath, but not pinned. The wagonload of tobacco also flipped, skidded and came to rest next to the tractor. The decedent’s brother, along with the other migrant workers who had followed the tractor in a van, retrieved the decedent from underneath the tractor and drove him to the area hospital where he was declared dead from blunt force injuries.

On September 13, 2002, a 26 year-old died when the tractor he was driving overturned. FACE was notified on September 15, 2002, of the incident and on September 17, FACE began an investigation. A visit to the scene was made, and interviews with the farmer, his wife, County Sheriff, Deputy Sheriff, an interpreter, and coroner were conducted.

The farmer (employer) leased and lived on the farm where the incident occurred. He typically used migrant workers on the farm. Tobacco farming in Kentucky often uses migrant workers to plant, cut, house and strip tobacco. During September, migrant farm laborers are in Kentucky to cut and house tobacco. The decedent was a member of a group who had worked on this farm before, harvesting 24 acres of tobacco. This particular group travels around the United States following crop planting and harvesting. After they harvest and house tobacco in Kentucky, they will travel north to harvest apples.

The migrants had returned to the farm from working for a different farmer, to finish harvesting the remaining four acres of tobacco. The tobacco was cut on one farm, hauled on a wagon to another farm (approximately 1 mile away) on a paved road, and hung in a barn to dry. This particular group of migrant workers was Hispanic, with one of the Hispanic men as the leader (contractor), and the other laborers as subcontractors. Payment was made to the contractor. This migrant labor group consisted of the contractor who subcontracted two of his daughters, the decedent, two of the decedent’s brothers and several of the decedent’s cousins. The contractor spoke to the subcontractors in Spanish. One of his daughters was somewhat bilingual and spoke both Spanish and English. This daughter spoke to the farmer in English and her father in Spanish. During the six weeks before the incident, they had cut and housed 20 acres of tobacco on this particular farm. At the time of the incident, they were cutting and housing another four acres of tobacco.

On the day of the incident, the workers and the farmer had cut and loaded 5 – 6 wagonloads of tobacco. Each wagonload weighed between 5,000 to 7,000 pounds and was pulled by a 1985 Ford Model 2910 tractor which weighed approximately 4200 pounds. It was not equipped with a ROPS or seatbelt. The tobacco-laden wagons were taken to another farm, approximately one mile away where they were unloaded and the tobacco hung from rafters in a barn to cure.

The wagonload pulled out of the driveway and turned left toward the other farm followed by the van. They traveled uphill then began a descent down the other side. About midway down the hill, the road levels off even with a driveway. Here, the contractor had the decedent stop the tractor and had everyone on the wagon get in the van. It is unknown why the workers got off the wagon and into the van. The tractor and van began to proceed down the hill. The slope of the road down the hill ranges between 5 – 8 degrees. As they proceeded, the victim lost control of the tractor and the tractor sped up then started to jackknife. Near the bottom of the hill, the trailer came loose from the tractor, breaking at the end of the metal tongue. At the bottom of the hill, the road made a 90-degree curve to the right. The trailer went to the left side of the road, along a tree line, flipped over in the curve, and slid next to the tractor. In the meantime, the tractor had gone sideways in the road, flipped, then slid and came to rest with the tires in the air.

According to witnesses, the decedent was under the tractor, but not pinned. One of the brothers pulled the decedent from underneath the tractor (the decedent was reportedly gasping for air but unresponsive) and put him in the van. They turned around, drove back by the driveway to the farm, and let the contractor’s English speaking daughter out at the end of the driveway so she could tell the farmer what had happened. While she ran to the house about 3/10 of a mile from the road, the contractor drove the decedent to the local hospital approximately 20 minutes away. The daughter reached the house and informed the farmer and his wife that the tractor had overturned and the contractor had taken the decedent to the hospital. The farmer’s wife called the police dispatcher to tell him there was a tractor overturned on the road, and that the driver had been taken to the local hospital. The farmer and his family with the contractors’ daughter left for the hospital. The dispatcher radioed the county sheriff’s office and informed them of the tractor rollover and that the driver had been taken to the hospital. A deputy was dispatched to the scene.

While the deputy was on the way to the scene, the contractor with the decedent had arrived at the local hospital. There, a local ambulance service on site noticed the workers covered in blood and thought there had been a stabbing. The ambulance personnel called the emergency dispatcher and reported a stabbing, then proceeded to administer CPR to the decedent. The contractor, who spoke Spanish, was unable to communicate with the ambulance personnel or the hospital personnel that the decedent was the driver of the tractor rollover and had not been stabbed. The local community had one emergency dispatcher that dispatched for both the city police department and the county sheriff’s department. Each department could hear the dispatch for the other. The dispatcher, thinking the man had been stabbed, radioed the city police who dispatched a city policeman to the hospital to investigate a stabbing. The Sheriff’s department heard the call to the City police regarding the stabbing and associated the tractor driver as being the “stabbing” victim.

The cause of death was due to blunt force injuries to trunk, multiple rib fractures and pulmonary contusions and lacerations.

Recommendation No. 1: All tractors should be equipped with seatbelts and ROPS.1

Discussion No. 1: Rollover protective structures and seatbelts used together save lives.2 The tractor involved in this incident, manufactured in 1985, was not equipped with ROPS or a seatbelt at the time of the incident. A retrofit ROPS is available for this tractor and costs approximately $530 (A Guide To Agricultural Tractor Rollover Protective Structures3). In 1976, OSHA Standard 29 CFR 1928.51 went into effect. This standard strongly recommends ROPS be installed on older tractors whenever possible. Tractor owners should contact dealers, manufacturers, or county extension agents for information on sources of retrofit ROPS and operator restraint systems.

Recommendation No. 2: Tractors should be operated in a safe manner on hills, including gearing and downshifting for the appropriate task and ground conditions.

Discussion No. 2: It is not known in what gear the decedent was operating the tractor when going down the hill. The farmer had used that same tractor many times before to pull wagonloads of tobacco from the farm to the barn one mile away using the same road and the contractor had as well. The decedent should have received training in downhill and roadway operations.

Recommendation No. 3: Farm laborers should be provided adequate training on tractor operation. This training should also include how to safely operate a tractor on all terrains, i.e.: flat fields, hillsides, paved and gravel roads.

Discussion No. 3: Farm laborers should be trained in all aspects of operating tractors. This training should include how to use the brake mechanism, clutch and gears and include how to choose the appropriate gear for specific circumstances. Communities with migrant farm populations should consider group training to educate migrants on use of farm equipment. This outreach program should be taught in the native language of the migrants, by someone who is fluent in the language and familiar with their customs.

Discussion No. 4: When the contractor arrived at the hospital with the decedent, they were covered in blood. An ambulance driver saw them and before confirming the circumstances of the situation, called the police dispatcher and reported that it appeared there had been a stabbing. 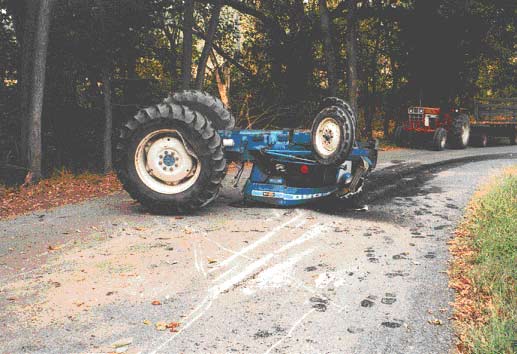 Tractor and wagon involved in the incident. The wagon had flipped and slid next to tractor. In this photo, the wagon had been up-righted and prepared to be returned to the farm. 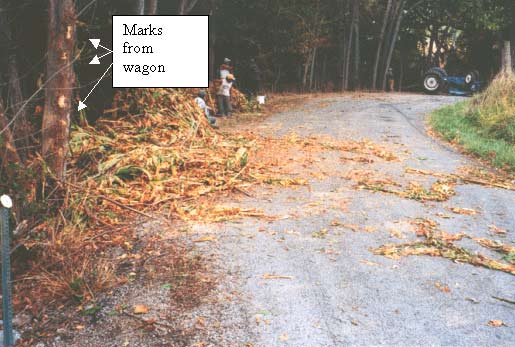 A picture of the tobacco which spilt from the wagon as it rode the tree line, flipped, then slid next to the tractor. Notice the marks on the trees where the wagon hit. 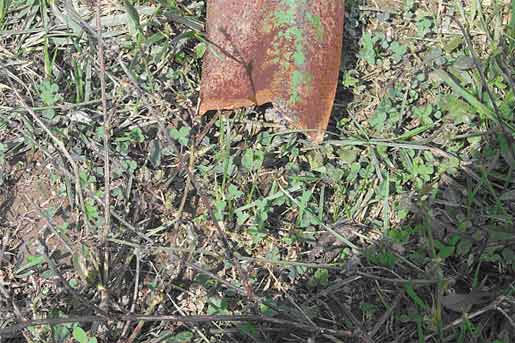 End of wagon tongue with pin hole sheared off.