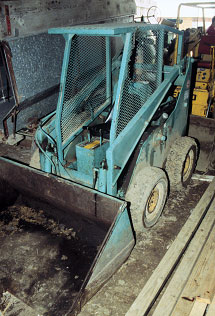 In March, 1999, a 66-year-old Iowa farmer was killed while cleaning out his barn with a skid-steer loader. He was driving into the building, then backing up, using the edge of the bucket to scrape manure off the concrete floor. The small barn was set up for feeding / riding horses, and storing equipment. On the barn wall were two doors with light metal gates which opened to the inside. During manure removal they would have to be kept out of the way by keeping them latched or secured to the wall in the open position. Desiring to clean along this wall, the farmer stopped the loader near one door, then leaned out of the machine to latch the gate. The loader bucket was in the raised position when the farmer leaned out to his right side under the loader lift arm. While leaning, he apparently touched the lift arm control lever with his leg or hand causing the bucket to drop. The right lift arm came down and pinned his body against the frame of the protective cage, causing suffocation. The man’s 14-year-old grandson noticed what had happened, and ran to get his mother. She came to the aid of her father, but they were unfamiliar with the machine and could not raise the bucket. The man’s son just happened to call the farm at this time, and shortly arrived and freed his father. He was taken to the hospital, but died the following day from his injuries. This skid-steer loader had a mechanical interlock connected to the operator’s seat. This interlock would not allow the loader bucket and lift arm hydraulics to operate unless the operator was sitting in the seat. However the interlock was not fully operational. If the hydraulic control lever for the lift arms was slightly off center when the operator left the seat, the interlock would not function. This allowed the hydraulic control to move forward and lower the lift arms even when the operator was not sitting in the seat. This interlock problem likely contributed to the injury.

RECOMMENDATIONS based on our investigation: 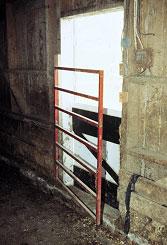 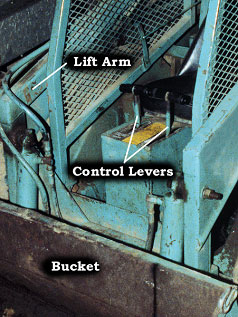 In March, 1999, a 66-year-old Iowa farmer was killed while cleaning his barn with a skid-steer loader. The Iowa FACE program became aware of the incident the next day from a colleague at the Institute for Rural and Environmental Health. Information was collected from the County Sheriff, newspapers, and EMS, and a site visit was scheduled a few weeks later. Two investigators from the Iowa FACE program and a graduate student visited the farm site, talked with the victim’s son, and photographed the skid-steer loader, stored in a shed at a neighbor’s farm.

The victim was a life-long farmer, and had worked at that location for the past 20 years. The farm was 40 acres and the farmer rented more land nearby and produced hay, corn, and a few cattle. It was a small family farm, and the man often worked alone. There was no safety program in place. There were no other employees, however occasional help was received from family members. The farmer had owned the skid-steer loader for the last 14 years, and was very familiar with its operation.

The farmer had rented out part of his land to pasture horses, and was in the process of cleaning manure out of his small older barn, which was used as shelter for the horses. He had tipped down the edge of the bucket on the skid-steer loader, and was backing up with the machine, scraping manure off the concrete barn floor. Along the right side of the barn were two doors leading out to the barnyard. There were light metal gates at the doorways, and the gates swung open into the barn area. The farmer desired to clean along the right edge of the floor, and encountered a gate in his way (see Photo 2). Leaving the machine running with the bucket raised, and with the controls in a neutral position, the farmer leaned out of the skid-steer loader to shut and latch this gate. While doing so, he apparently actuated the control lever for the loader with his leg, and the lift arms came down and pinned him against the cage of the machine. The lift arms stopped their downward movement only when the bucket edge hit the barn floor.

The farmer’s grandson was visiting that day, and noticed what had happened. The machine was running at full throttle, so he tried to shut off the machine, eventually succeeding by altering the carburetor. The boy ran and told his mother, but she was unfamiliar with the loader, and did not know how to operate it. Her brother, the victim’s son, called on the phone at this time, and was told of the accident. He immediately called 911 and drove to the farm where he found his father still pinned in the skid-steer loader. He started the machine, freed his father, and began resuscitation efforts. The man was taken to the hospital, but died the following day from his injuries. 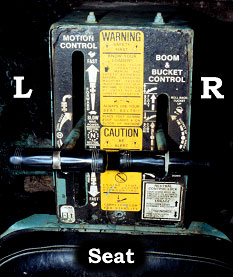 The skid-steer loader was 25 years old, and had been used by the farmer for the past 14 years. It was maintained by him, and remained in good operating condition. The primary controls on this machine were two T-handles (see Photos 3,4). The left handle controlled the machine’s movement: forward, reverse, left, and right. The right handle controlled raising and lowering of the lift arms, and the bucket tilt. When the right handle is pulled towards the operator, the bucket and the lift arms drop down. The exact position of the controls at the time of the accident was not documented, and the position would have changed while freeing the victim from the machine. However, the right handle must have been pushed towards the seat to allow the bucket to drop. Perhaps the victim leaned out too far, lost his balance, and partially fell on the controls.

This machine came equipped with a seat-actuated mechanical interlock, which holds the control levers in their neutral position when the operator leaves his seat, preventing any movement of the bucket or lift arms. This interlock did lock the hydraulic controls when they were exactly in the neutral position. However, if the control levers were moved slightly off of center when the operator left his seat, the mechanical interlock did not engage, and the controls remained free to move, even if the operator was completely out of the seat. The victim’s son experimented with the loader after the accident and discovered this problem with the interlock.

An implement dealer, familiar with this type of loader, confirmed that a worn-out interlock was likely a contributing factor to the accident. The mechanical interlock was subject to normal wear and tear, and had become loose in its connections, not fully unexpected after 25 years of service.

The cause of death from the medical examiner was pulmonary failure due to displaced sternal fracture due to blunt chest trauma. A contributing factor was anoxic brain injury.

Recommendation #1: Operators of skid-steer loaders should not leave the seat while the machine is running. Likewise, they should not allow any part of their body to be under the raised loader bucket or lift arms, unless the loader is securely supported.

Discussion: The farmer in this case leaned out of the skid-steer loader to shut a gate. This type of work procedure may save a little bit of time compared to lowering the bucket, shutting off the machine, and stepping out and back into the machine. Interlocking mechanisms have been built into skid-steer loaders for over two decades to protect the operator from accidental movement of the loader in case the operator has to step out. It is not known if the farmer had closed the gate in this manner before, however, this time the interlock failed, and the farmer was fatally injured while leaning out of the machine. Safety systems and warnings are designed to protect operators — they should be maintained in good operating condition, and not ignored, disabled, or removed. Regardless of the safety interlocks, it is necessary that whenever the operator must reach or step out of the machine, the loader bucket should be lowered, and to be fully safe, the engine should be shut off.

Recommendation #2: Manufacturers should provide several reliable mechanisms to prevent injuries from the loader falling unintentionally, and owners should maintain these mechanisms in good working condition.

Discussion: The mechanical interlock connected to the operator’s seat was the only safety mechanism to prevent lowering of the bucket unintentionally. Newer machines have multiple mechanisms to protect operators from the danger of being crushed under the bucket. One method is to lock the loader hydraulics, including safety belt-operated interlocks, ignition-operated interlocks, operator presence sensors in the seat, front door interlocks, and safety bars requiring the operator to be present in the seat. Some of these interlocks may also shut off the engine when activated. Other interlocks may require that the engine is running before the hydraulics will operate. Without this feature, the bucket may be accidentally lowered by gravity (but not raised) even if the engine is not running. A final method, mechanical lift arm stops, may be provided to safely lock the loader in the raised position for maintenance or other purposes. This machine was 25 years old and had only the operator presence sensor type interlock, which was not fully functional due to wear and tear. It would be important that safety devices are maintained in good working condition and repaired as necessary.

Recommendation #3 Operators of skid-steer loaders should plan ahead to minimize unnecessary trips on and off their equipment.

Discussion: In many instances there are obstacles in the work area, which should be removed before operating the loader. This is often more efficient than removing them later or trying to work around them. This fatality could probably have been avoided with one trip to check the area, removing obstacles in the way, then opening the door that needed to be open and closing the gates that needed to be closed.