A 52 year-old welder was crushed to death by a hydraulic door on a scrap metal shredder. The victim was attempting to remove a jammed piece of metal from the hydraulic door when the incident occurred. The system’s energy had not been released and the controls were not locked, blocked, or tagged out before the victim attempted to remove the jam. Two coworkers stated that the victim told them he had secured the system. The company did not require a supervisor’s visual confirmation of de-energizing and lockout / tagout prior to maintenance work.

On March 15, 2002, at approximately 8:40 p.m., a 52-year-old mechanic/welder was crushed after removing a jammed piece of metal from a hydraulic door. The CA/FACE investigator learned of this incident on March 18, 2002, through electronic mail via a newspaper article. On April 10, 2002, the CA/FACE investigator traveled to the victim’s place of employment and interviewed witnesses to the incident and took pictures of the incident scene.

The company’s safety manager provided the company’s history as well as copies of requested polices and procedures.

The employer of the victim had a safety program and a written IIPP with the required elements. There were some task specific safe work procedures written and available for employees but not specifically for unjamming the shredder. Safety meetings were held monthly and documented. Training was provided by the company and accomplished through training films in a classroom setting and on-the-job-training (OJT). The company also had an extensive written lock out/tag out procedure in which the victim was trained. The company’s lockout/tagout procedure allowed for an individual to lock out equipment for the whole work crew. Training was measured through demonstration and records of training were maintained.

The site of the incident was a 27-acre full-service scrap metal facility that processed, recycled and exported all grades of ferrous metal. The machine involved in this incident was a ferrous metals shredder referred to as the “Mill” (exhibit #1). The mill consisted of a an 8 foot wide conveyor made of connected metal pans running on a track, a hooded hopper that contained a metal shaker, drum and hammers, and a hydraulically operated rejection door (exhibit #2). Material placed on the conveyor would be fed into the hopper (exhibit #3) where it would be shredded by hammers attached to a rotating drum (exhibit #5). Whenever pieces of metal were unable to be shredded by the hammers, the operator of the system would open the hydraulically operated throw-out door, which flips down, to allow the unshredded metal to by-pass the hammers and be recycled (exhibit #6). The shaker would take the shredded material and give a uniform feed to a conveyor belt where the material would pass through a series of magnets to separate ferrous metal from non-ferrous pieces.

On the day of the incident, the mill had just been started and was shredding pieces of ferrous metal being fed into the hopper by the conveyor. When the operator of the mill opened the throw-out door to allow the unshredded metal to be recycled, the throw-out door jammed with a piece of metal, preventing it from closing. The un-jamming of the hydraulic door was a common task that until this time had been performed without incident. The owner of the mill did not consider the frequency of the jams to be unusual for this type of machine or this type of work.

The victim was sent to remove the jam by his supervisor. The victim had performed this maintenance activity frequently in the past. He got a ladder, torch and padlock and went to the hopper. The victim used the ladder to gain access to the jammed door. Although two co-workers stated that the victim told them that he had locked out the system, the system had not been locked-out or de-energized. The victim laid across the top edge of the door and cut away the obstruction with the torch. When the piece of metal was cut away, the hydraulic door, which was still under pressure, closed upward on the victim. The supervisor, who was observing the operation, was knocked off the ladder he was standing on when the door slammed shut. He sustained a severe back injury. A co-worker was able to activate the hydraulic door and release the pressure on the victim. He was then removed from the door to an adjacent catwalk where CPR was performed. The paramedics arrived and checked for spontaneous pulse and respiration and found none. He was pronounced dead at the scene. The lock that was supposed to be used to lock out the system was recovered from the victims clothing.

The cause of death, according to the death certificate was blunt force injuries to chest.

Discussion: It is essential that machinery should be de-energized, disengaged, or isolated prior to any cleaning or maintenance. In addition, the source of energy must be locked out so others cannot re-energize the machine when an employee is in an area of danger. It is also necessary to place tags at the energy sources to warn others that the machine is locked out of service. The company had an extensive written lock out/tag out procedure in which the victim was trained. Employers need to ensure that employees are properly implementing required safety procedures.

Recommendation #2: Ensure employees block mechanisms from moving prior to performing repairs or maintenance.

Discussion: Even though a mechanism may be disconnected, drained, isolated, dissipated, or turned off, it still may be necessary to block the device if it is capable of movement. Many manufactures make blocking devices for their products used in conjunction with other machines. A blocking device is added protection to assure no unwanted movement especially when employee safety is involved. Had a blocking device been used to prevent the throw-out door from moving, this incident might have been prevented.

Discussion: In this case, the employer had all the required written elements in place to prevent such an incident. The supervisors were confident that all safety procedures were followed especially when the victim checked out a padlock to lock the system prior to beginning service. Two coworkers told the investigator that the victim told them that the system was secured. After a 20-year work history the statement of a trusted employee was usually sufficient verification to assure compliance. In view of this incident, employers should consider implementing procedures that will verify compliance and reassure all concerned that the necessary safety action has been implemented. Written check off sheets with signatures and actual visual confirmation are just some of the ways employers can assure conformity to safety. Safe practices can be assured through programs of training, supervision, rewards, and progressive disciplinary measures. 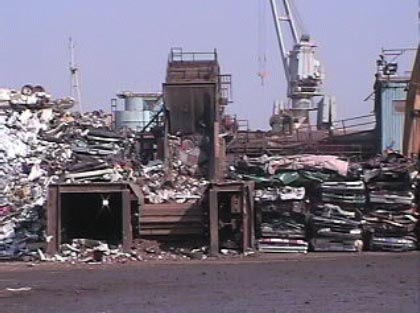 Exhibit 1.
Front view of the shredding machine called the “Mill” involved in this incident. 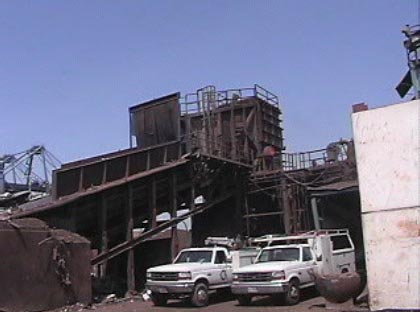 Exhibit 2.
Side view of the mill showing the conveyor rail and hopper. 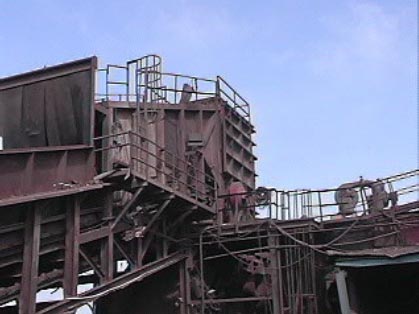 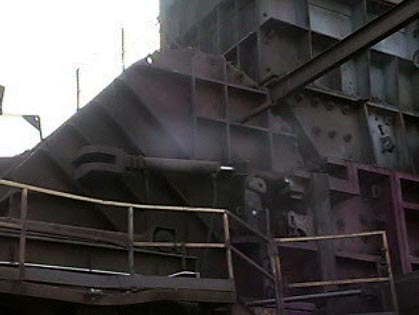 Exhibit #4.
View of the hydraulic cylinder used to open and close the throw-out door. 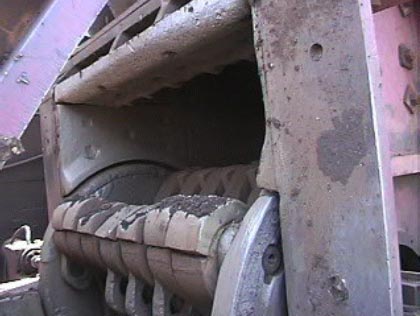 Exhibit #5.
Left side view of the drum and hammers within the hopper. 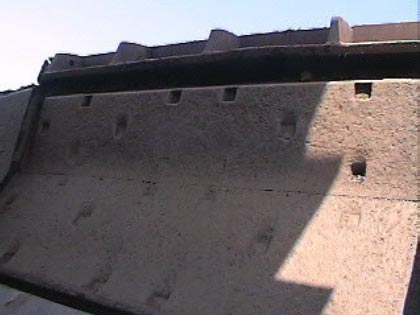 Exhibit #6.
Right side view of the hydraulic throw-out door that crushed the victim. 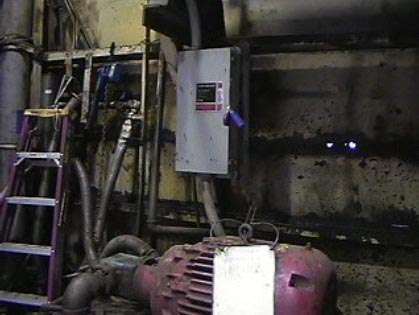 Exhibit #7.
View of the electrical panel and motor controlling the hydraulic system.