A 46 year-old heavy equipment operator was killed when the 58 ton dump truck he was backing slid down an embankment that gave way when the truck got too close to the edge. A signalperson told him to stop approximately 8 feet before the edge then gave the sign to dump, however, the truck continued to back up. The ground under the rear wheels of the truck gave way and the truck went over the edge. The truck then slid backwards down the embankment and then rolled over, back to front, landing on the roof. The embankment berm was insufficient to stop the trucks when they got close to the edge. The dump truck was supplied with a lap-type safety belt that the victim was wearing. The CA/FACE investigator determined that, in order to prevent future occurrences, employers, as part of their Injury and Illness Prevention Program (IIPP) should:

On January 22, 2002, at approximately 12:30 p.m., a 46-year-old equipment operator suffered blunt head trauma when the dump truck he was backing went over an embankment. The CA/FACE investigator learned of this incident on January 31, 2002, through the Legal Unit of the California Division of Occupational Safety and Health (Cal/OSHA). On April 1, 2002, the CA/FACE investigator traveled to the victim’s place of employment where he met with the safety director. The company safety program was reviewed and investigation reports, witness statements, and pictures were obtained. On October 25, 2002, the CA/FACE investigator traveled to the incident site to interview the general contractor’s safety representative and other witnesses to the incident.

The employer of the victim was a general engineering contractor sub-contracted to supply the trucks and drivers for the project. The company had been in business for 30 years and had approximately 190 employees. The company had been at the site for 3 months and had 2 employees there at the time of the incident. The victim was hired out of the union hall for this project and had been at the site for 3 months. The victim’s work history and training were unobtainable.

The employer of the victim had a safety program and a written IIPP with the required elements that were updated annually. The task specific safe work procedures for the victim’s occupation were available through the “Fleet Safety Compliance Manual.” Safety meetings were held weekly and documented. Training was provided for regular employees and accomplished through training films in a classroom setting and on-the-job-training (OJT). Training was measured through observation by supervisors.

The site of the incident was a gravel pit that crushed rock and dirt. The rock and dirt were excavated in a separate area of the pit, then transported by truck to a designated area called the “dump pad” which was located on top of an embankment approximately 70 feet high (see Exhibits #5 & 6). Trucks would back up to the dump pad and dump their load as close to the edge of the embankment as possible. A bulldozer would then push the rock and dirt over the embankment and reestablish the berm. A berm is a mound of gravel and dirt at the edge of an embankment that is piled high enough to prevent trucks from over-traveling and over-turning. The truck involved in this incident was a 58 ton rock dump truck that was constructed for this purpose only and not subject to vehicle registration. The victim was not required to have a special license or certification to operate the truck.

On the day of the incident, the victim, along with several other truck drivers, was hauling dirt and rock to the dump pad and dumping the load where designated. When the rock hauling trucks starting dumping their loads on another dump pad that was closer to the rock crushing plant below the embankment, the plant supervisor went up to the dump pad to give signals to the trucks as to where to dump their loads and assist them when backing.

The supervisor noticed the victim backing too close to the berm so he gave the victim the signal to stop and dump his load. When the victim finished dumping his load the plant supervisor stated he told him not to back so close to the edge. When the victim arrived with his second load approximately 5 minutes later, the signalperson (plant supervisor) directed the victim backing until he was approximately 8 feet from the edge of the embankment and then he signaled the victim to stop until the area below was cleared by a front-end loader. When the area was cleared, the signalperson gave the signal to dump the load. The signalperson then turned away to see if any more trucks were coming. He then heard the tractor operator from down below yelling over the two-way radio that the victim’s truck was going over the edge. The supervisor turned around and saw that the victim, instead of dumping his load as signaled, had backed up on top of the berm and the rear tires were starting to sink into the un-compacted soil.

The ground beneath the rear tires gave way and the dump truck started to slide down the embankment. It continued down the embankment slowly for about 50 feet, then the rear of the bed of the truck wedged into the dirt causing the front of the truck to go vertical and then it rapidly turned over rear to front with the victim belted in the cab. The dump truck finally came to rest in an upside down position with the cab intact. Witnesses to the incident ran to the dump truck and removed the victim by cutting him out of the lap seat belt. The paramedics arrived and treated the victim. He was then airlifted to a hospital where he was pronounced dead.

The cause of death, according to the death certificate was blunt head trauma.

Recommendation #1: Ensure berms are adequately built to prevent trucks from over-traveling and over-turning at dumping locations.

Discussion: Berms, when properly installed, should prevent trucks from over-traveling and over-turning at dumping locations. In this particular case, the berm was inadequate in height and width to stop the truck. Had the berm been properly installed at this job site, this incident might have been prevented.

Recommendation #2: Ensure that heavy equipment operators follow all operating signals they are given.

Discussion: The signalperson stated he gave the victim the signal to dump his load. A witness stated the victim backed the dump truck after being giving the signal to dump. The construction industry has a standard set of signals they recommended for signaling heavy equipment movement. Safe practices can be assured through programs of training, supervision, safe work recognition, and progressive disciplinary measures.

Discussion: The victim died from blunt force head trauma because of the lack of restraint for the upper body. When properly restrained, the upper body would be secured and unable to be tossed around when in a rolling or tumbling condition. The restraint could also help prevent injuries. 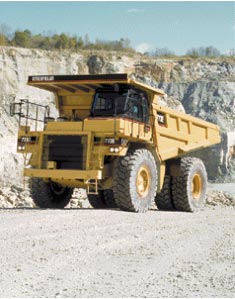 Exhibit #1
View of an off-road dump similar to the one involved in the incident. 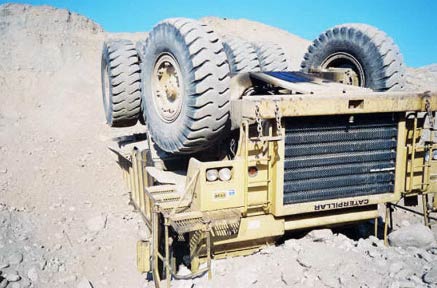 Exhibit #2
View of the truck as it came to rest after tumbling over the embankment. 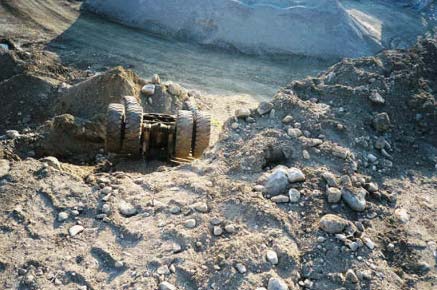 Exhibit #3
View of the truck looking down from the top of the embankment. 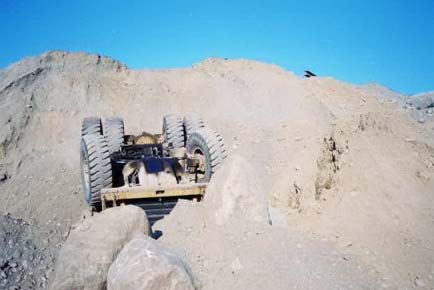 Exhibit #4
View of the truck looking up from the bottom of the embankment. 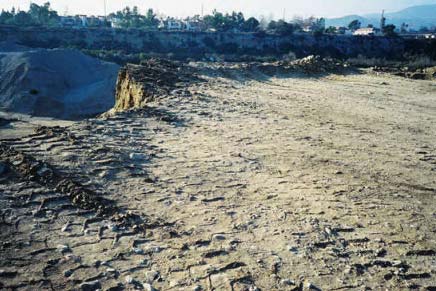 Exhibit #5
View of the area looking north where the truck went over the embankment. 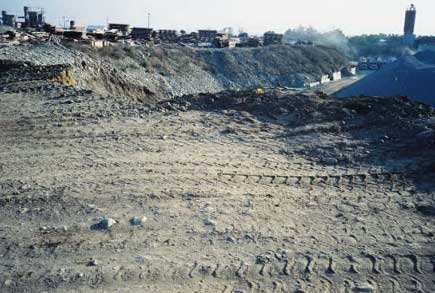 Exhibit #6
View of the area looking south where the truck went over the embankment.