A 31-year-old male construction worker was killed when struck by an oncoming vehicle on an interstate highway transition road. The victim jumped over a concrete barrier separating the work zone from the roadway. The vehicle that struck the victim was traveling at an estimated speed of 62-80 mph when the incident occurred. The driver of the vehicle did not see the victim until it was too late to avoid hitting him. The CA/FACE investigator determined that, in order to prevent future occurrences, employers, as part of their Injury and Illness Prevention Program (IIPP) should:

On February 27, 2002, at approximately 12:45 p.m., a 31-year-old male, working as a construction laborer, died after being struck by a moving vehicle. The victim crossed over a cement barrier, known as a “K” rail, and into oncoming traffic. The incident occurred on a transition road from an east/west interstate highway to a north/south interstate highway.

The victim had approximately seven years experience in his occupation and had been with the company for three months when the incident occurred. According to the general contractor, the employer of the victim had a safety program and a written IIPP with the required elements. There were task-specific safe work procedures written and available for employees to follow. Safety meetings were held monthly, and tailgate safety meetings were held weekly at the job sites. Training was accomplished mainly through on-the-job-training (OJT).

The site of the incident was a two-lane transition road from an east/west interstate divided highway to a north/south interstate divided highway. The transition road was two lanes formed from the westbound #3 and #4 traffic lanes. The #3 lane divided at the transition point and continued west. On the day of the incident, the victim was assigned to work with a co-worker and remove a concrete drain cover by breaking it into small pieces with sledgehammers. The location of the drain cover was at the beginning of the transition road on the north side behind the protective barrier. The protective barrier was set up in accordance with the Manual on Uniform Traffic Control Devices. The co-worker drove the victim to the work site and parked the truck behind the protective barrier. They both got a sledgehammer and started breaking the concrete drain cover. The victim made comments to the co-worker that they had the wrong tools to do the job. The victim wanted to use a jackhammer instead of a sledgehammer. The co-worker told the victim he would finish the job himself. The victim then dropped his sledgehammer into the dirt, picked up a shovel, and walked away. The co-worker, not aware of where the victim was going, went back to work and finished the job.

According to the police report, other witnesses to the incident stated they saw the victim, wearing an orange reflective vest and hard hat, jump over the protective concrete barrier and onto the transition ramp and run right in front of the vehicle that struck him. The paramedics and fire department responded and subsequently found the victim without a pulse and respirations. The victim was pronounced dead at the scene.

The cause of death, according to the death certificate was blunt force head and chest injuries.

Discussion: Employers are required to provide a safe work zone for their employees working on streets and highways. This safe work zone should be described in a written procedure that explains the boundaries and safe work practices of that safe work zone. Employers should also ensure employees are aware of the safe work procedures and practices by having a system in place that informs them of their safety responsibilities. Safe work practices can be assured through programs of training, supervision, incentives, and progressive disciplinary measures. When that system fails to achieve the desired goals, then new or different techniques must be employed in order to ensure compliance. Effective methods might include extended training programs, testing to ensure understanding, stronger disciplinary measures for violators, and recognition for compliance. 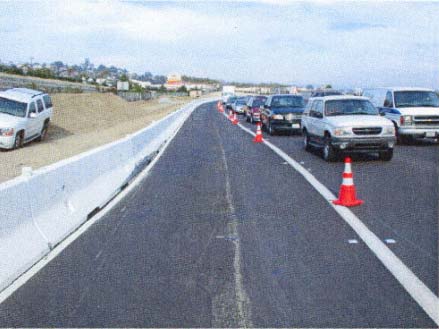 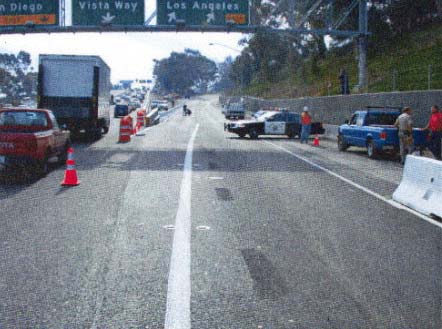 Exhibit #2
View of the transition road where the incident occurred looking west. 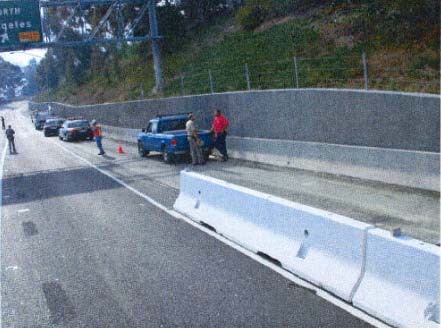 Exhibit #3
View of the end of the protective barrier that the victim jumped over. 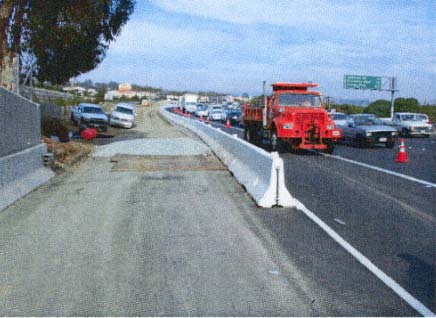 Exhibit #4
View of the work area where the victim was working. 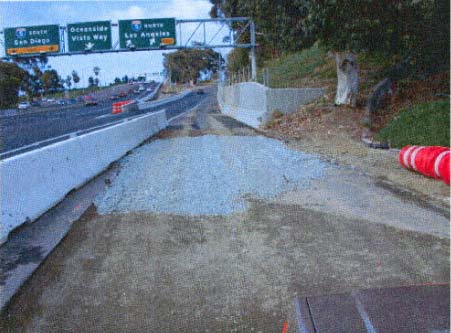 Exhibit #5
View of the work area looking toward the transition road where the incident occurred.