A 37 year-old male elevator mechanic helper died when he was crushed in an escalator as he was performing maintenance. The victim had removed the escalator stairs and was standing inside the mechanism of the escalator when the power suddenly came on. The stairs began moving before the victim could get out and before the power could be turned off. There were no locks or tags on the controls that supply the electrical power to the escalator. The disconnect switch at the circuit panel that fed power to the elevator had not been locked and tagged out. The power came on when a co-worker dropped the electrical circuit box, triggering a relay that started the escalator’s movement. There was a mechanical blocking device on the escalator to stop movement during maintenance, but it was not used.

On September 27, 2001, at approximately 11:30 a.m., a 37-year-old male elevator mechanic helper died when crushed in an escalator mechanism that was under repair. The CA/FACE investigator learned of this incident on October 19, 2001, through the Legal Unit of the Division of Occupational Safety and Health (Cal/OSHA). On October 30, 2001, the CA/FACE investigator traveled to the victim’s place of employment where he obtained a copy of the company’s corporate safety program and interviewed the company’s Office Manager and the Field Operations Manager. On November 6, 2001, the CA/FACE investigator traveled to the incident site, interviewed witnesses to the incident, and took pictures of the incident scene.

The employer of the victim was a global company that develops, engineers, manufactures, installs and services elevators, escalators and automated walkways. The company has been in business for over 50 years and in the United States for 24 years. The local branch of this company had approximately 50 employees. The victim had seven years experience in his occupation and had been with the company for only three months when the incident occurred. The victim had worked for the company in prior years and was a re-hire. The victim and his co-worker, a certified elevator mechanic, had been working at the incident site for the past 14 days and were the only two employees of the company at the site at the time of the incident.

The employer of the victim had a safety program and a written IIPP with the required elements. The company adopted the Field Employees’ Safety Handbook for safety procedures for service and maintenance of escalators. Safety meetings were held weekly and documented. Training was provided when needed or required and given by the company, union, and consultants. The union provided the certification required to work at the journeyman level of mechanic. Training was measured through testing and demonstration with documented records kept on file.

On the day of the incident, the victim and co-worker arrived at 6:30 a.m. to continue the job they started approximately two weeks prior. The job consisted of replacing the idler sprockets and handrail drive trains that were located within the internal mechanism of the escalator. The victim went to the second floor escalator landing and opened the floor plate. He then entered the machine room (exhibit #5) and turned the “main line disconnect switch” to the “on” position (see exhibit #4). The switch was turned on to direct the escalator stairs downward and to maneuver the step chain to a position where there would be an adequate opening for the workers to go down into the escalator truss to perform their work (exhibit #2). After the opening in the escalator truss was established, the victim shut off the main line disconnect switch and secured the floor plate. Neither he nor his coworker locked out or tagged out the switch in the off position. The main power switch at the buildings circuit panel was also not locked and tagged out. There were mechanical devices on the escalator for blocking movement during maintenance and servicing. These were not used during this incident.

According to the co-worker, he double-checked to assure that the main line disconnect switch was in the off position. He opened the floor plate and re-checked the switch. After their morning break, the victim entered the escalator truss and continued his work (exhibit #3). The co-worker stepped into the machine room to help the victim with his work. In order to make more room to maneuver within the machine room and to expose the sprocket and drive train, the co-worker had to remove the electrical control box and place it on the floor. The electrical control box weighed approximately 70 pounds. As the co-worker picked up the control box, the flex-cable connected to the electrical control box inadvertently got caught on the main line disconnect switch and turned it on (exhibit #4). The co-worker continued picking up the control box then dropped it outside the machine room on the floor to his left. The relay inside closed from the jarring of the drop and the escalator came on and starting moving down. The co-worker stated that when he saw the steps moving downward he immediately tried to stop them by jamming a steel bar into the truss mechanism but his attempts failed.

A Sheriff stated that he and two other officers ran to the escalators when they heard the scream. He immediately pushed the emergency stop button located at the lower entryway of the escalator. Another Sheriff called 911. The paramedics arrived within minutes and pronounced the victim dead after they checked for spontaneous pulse and respirations and found none.

The cause of death, according to the death certificate was massive internal injuries due to blunt force trauma.

Discussion: The company adopted and implemented the elevator industry’s policy on lock-out/tag-out. In this incident there were no lockout/tagout procedures used although it was required. The victim and his co-worker depended solely on the main line disconnect switch to remain in the off or open position. The flex-cable attached to the electrical control box turned the main line disconnect switch on when the electrical box was picked up. A lock on that switch would have prevented this from occurring. The main control panel supplying power to the escalators within the building should have been opened and locked and tagged as well. This was not done. The safety practices and procedures noted in the elevator industry’s safety handbook are specific for this type of work. Had these general rules been followed, this incident might have been prevented.

Recommendation #2: Ensure employees do not move electrical escalator equipment when all or part of someone is inside the escalator mechanism.

Discussion: The victim’s coworker moved and dropped the escalator control box while the victim was in the escalator. This powered up and switched on the escalator, resulting in the death of the victim. Safe work practices can be assured through programs of training, supervision, rewards, and progressive disciplinary measures.

Recommendation #3: Ensure employees block mechanisms from moving prior to performing repairs or maintenance.

Discussion: This escalator was equipped with mechanical blocking devices. These were not used during this incident. Machines that are capable of crushing or striking workers should be blocked with wood or by blocking devices mounted on the machine prior to the start of service or maintenance. 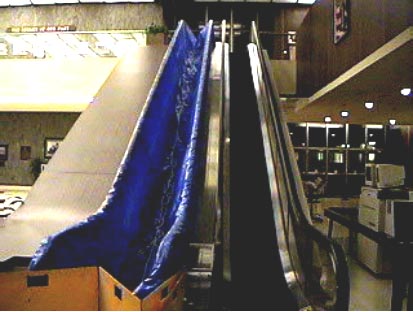 Exhibit 1.
View of the escalators running between the lobby and second floor of the courthouse. The escalator on the left was involved in the incident. 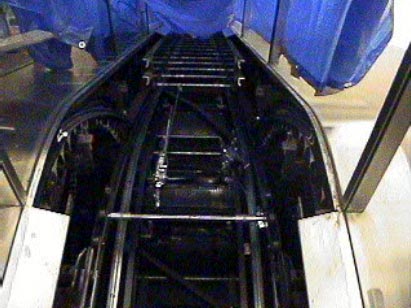 Exhibit 2.
View of the #2 escalator landing with the stairs removed exposing the escalator truss. 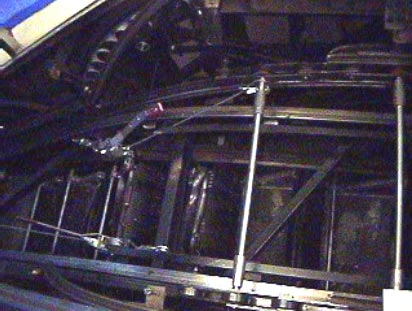 Exhibit #3.
View of the escalator truss with the stairs removed. This is where the victim was working when the escalator suddenly came on. 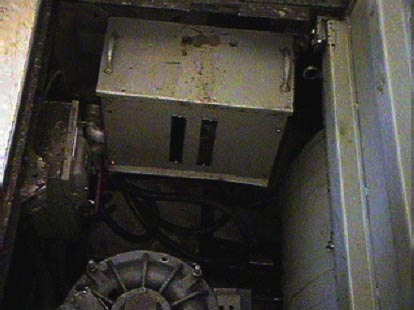 Exhibit #4.
A view of the machine room showing the electrical control box in the center and the main line disconnect with a bar handle to the left. 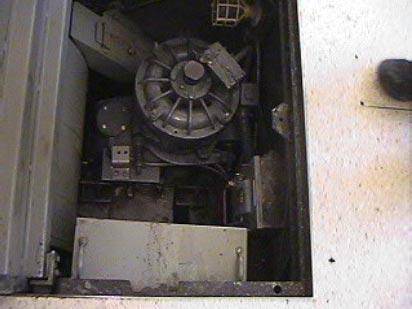 Exhibit #5.
A view of the machine room with all its components depicting its size. 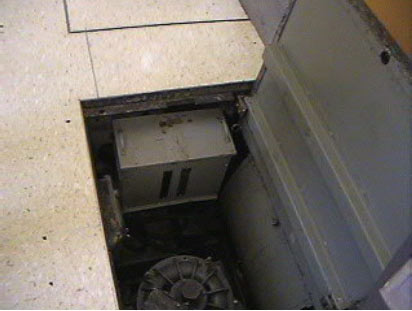 Exhibit #6.
View of the machine room with the floor plate opened.