On July 7, 1998, a 35-year-old male laborer (the victim) was run over by a dump truck during resurfacing operations on a two-lane municipal road. The victim, part of an eight person paving crew, was assigned to rake and finish the edge of the abutment between the new pavement and the existing concrete curb. For an unknown reason, the victim left the curbside of the road, walked around the front of the paving machine, and continued walking back along the road centerline. At the same time a dump truck, leaving the work zone, was traveling behind the victim in the adjacent lane. As the truck approached, the victim walked in front of the truck’s right front bumper. He was not seen by the truck driver, and was struck and run over by the right front wheel of the truck. Co-workers yelled to the truck driver to stop; however, the driver did not immediately hear the warnings and continued to drive forward until the rear wheels of the truck contacted the victim’s foot. When he heard the co-workers’ shouts he stopped the truck and was directed to back up to free the victim. Co-workers notified emergency medical personnel who responded within 12 minutes. Resuscitation procedures were initiated and the victim was transported to a local hospital where he died approximately ½ hour after arrival.

NIOSH investigators concluded that to prevent similar incidents in the future, employers should:

Employers, manufacturers, and regulators should:

On July 7, 1998, a 35-year-old laborer (the victim) employed by an asphalt paving company was struck and run over by a dump truck during resurfacing operations on a municipal road. On August 14, 1998, officials of the Virginia Occupational Safety and Health Administration (VOSH) notified the Division of Safety Research (DSR) of the incident and requested technical assistance. On September 2, 1998, a DSR safety engineer reviewed the case with the VOSH compliance officer assigned to investigate it. Photographs and videos of the incident site taken immediately following the occurrence were examined. On September 2, 1998, the safety engineer interviewed the company office manager/safety director and discussed company safety programs and employee training.

The company in this incident employed 45 people and had been engaged in the paving business since 1962. At the time of the incident, safety management responsibilities rested with the company’s project manager. After the incident, the company’s office manager assumed these responsibilities. The company had a comprehensive safety policy and plan which was documented in an employee handbook. Each employee receives a copy of the handbook when hired and is required to read it. The company maintains records of receipt and understanding signed by each employee. Drivers are trained according to a comprehensive fleet management handbook. In addition to the handbook, workers receive on-the-job training specific to the job tasks assigned. All crew superintendents are trained in first aid and are responsible for crew safety at each jobsite. Each crew superintendent receives written guidelines for weekly toolbox safety meetings.

The victim had three months’ experience with the company. Previous to this, he had worked for an automobile manufacturer and for a grocery retailer. Between 1984 and 1986, he had worked for another paving company. The truck driver involved in the incident had driven for the company for six to eight years, primarily driving asphalt tanker trucks and occasionally hauling asphalt mix with the tandem axle dump trucks.

On the day of the incident, the crew arrived at the job site shortly before noon, having spent the morning hours paving a tennis court at another location. The road surface had been milled the day before. The eight person crew began resurfacing where the two-lane and four-lane road intersected (see Figure 1). The operation began with the placing of a new asphalt apron across the mouth of the intersection. The apron was then rolled while the paving machine proceeded to lay down a new “mat” (asphalt layer) in the northbound lane of the two-lane road. The victim had been assigned to rake and finish the edge of the pavement where it abutted and joined with the existing concrete curb. Shortly before 3 p.m., as paving operations were proceeding northward, the victim finished the pavement edge up to the back of the paving machine, which had stopped to await reloading of asphalt mix. The victim went around the front of the paving machine and continued walking south in the unpaved lane toward the intersection along the center-line edge of the new mat. At about the same time, a 1983 Mack tandem axle dump truck, leaving the work zone at about 5 mph, was also traveling south in the unpaved lane behind the victim. As the victim walked along the center line of the road, the truck passed the paving machine and the driver glanced in the right side rear view mirror to make sure that he had cleared the paving machine. At this time, the victim was slightly ahead of and adjacent to the truck’s right front bumper. The roller operator who was working behind the paver near the intersection saw the victim walk in front of the truck. The truck struck and ran over the victim. The roller operator and the superintendent shouted to the truck driver to stop; however, the driver did not hear the warnings until the truck’s right front wheel had passed over the victim and the lead wheel of the truck’s rear tandem axles had started to run over the victim’s foot. The driver stopped the truck and was directed to reverse a short distance to free the victim’s foot. Co-workers notified 911, and emergency medical personnel responded within 12 minutes. CPR and first aid procedures were started by the local fire rescue squad and continued while the victim was transported to a local hospital, about four miles from the site. The victim died at the hospital approximately ½ hour after the incident.

Recommendation #1: Employers should ensure that workers remain clear of moving equipment and that only those workers necessary to the job at hand be in the area.

Discussion: It appears that the victim did not have a job-related reason to walk in the area near the center line of the road. His assigned task area was on the curb side of the road. It was a hot day and VOSH investigators noted that it was common for crew members to seek shade during slack time. Having completed his task for the moment, he may have intended to wait under a shade tree until resurfacing had proceeded to a point where he would again be required to finish the abutment between pavement and concrete curb. The shade tree nearest the site was located on the side of the road opposite to his work area and in the direction he was moving. Members of paving crews routinely work in close quarters with slowly moving mobile equipment such as rollers and dump trucks and are used to their presence. It is possible that the victim may have become desensitized to the presence of the truck which was traveling behind him and did not realize how close it was when he walked in front.

Recommendation #2: Employers should consider the use of electronic signaling devices or sensors to warn equipment operators of the presence of pedestrians in the blind spots of mobile equipment.

Discussion: Devices are available which can detect the presence of persons in the blind spots of vehicles and provide a warning to the driver. Several factors affecting the driver’s visibility were present at the time of the incident:

As the driver proceeded toward the intersection and passed the paving machine, he glanced in the right side rear view mirror to make sure that he had cleared the machine. The victim may have walked in front of the truck at this time.

After the incident, the VOSH compliance officer, along with the police investigator and representatives of the employer, evaluated the visibility from the truck’s cab. During the evaluation, a person of identical height to the victim stood near the right front bumper of the truck while a second person shot a video from behind the steering wheel. The following additional factors were identified:

Discussion: As previously mentioned, the victim was wearing a white fishing hat with the brim turned down (helmet-like) and the color of the truck’s hood was white. High visibility orange, green, or yellow headgear could significantly increase the visibility of pedestrians. Additionally, providing and requiring each crew member to wear the same color, could further aid drivers and equipment operators in identifying pedestrian workers around vehicles.

Recommendation #4 Employers, manufacturers, and regulators, should carefully evaluate the placement of auxiliary equipment in vehicle cabs.

Discussion: As noted in the discussion for recommendation #2, the placement of auxiliary equipment on the truck and in the cab may affect a driver’s ability to detect the presence of a pedestrian near the truck (see figure 2). Some of these objects, such as the dash-mounted fan could block a driver’s vision. Other objects such as the inspection stickers may not block vision, but could pose a visual distraction. All the objects noted serve useful purposes, and help to provide a safe and efficient working environment for the driver. However, alternative mounting locations may be available which increase visibility while still preserving the intended function of the device in question. Inspection and permit stickers could be re-located to other positions on the truck’s body or fixed on metal plates mounted on the bumper near the license tag. It may be possible to mount fans used for ventilation and windshield defrosting on the cab ceiling near the passenger side window post or a centrifugal fan of lower profile could be used. 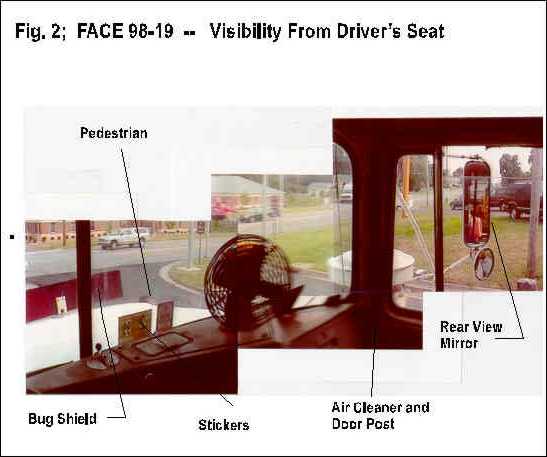