On September 24, 1996, a 17-year-old male laborer (the victim) suffered amputation of both legs after he fell inside an operating horizontal hydraulic baler at a resource recovery center. The victim and three co-workers had been loading cardboard into the baler via an inclined conveyor belt when the cardboard jammed in the baler’s feed chute. The victim shut down the conveyor and climbed the belt to the feed chute opening. He cleared the jam by holding onto the top cover of the baler feed chute and pushing with his feet. When the jam cleared, he fell through the feed chute into the baling chamber. Before he could climb out, the ram automatically activated, cycled into the baling chamber, and amputated his legs. The co-workers heard his cries and shut down the machine by activating an emergency stop switch, then notified 911. The victim’s family came to the site and removed him from the machine.

NIOSH investigators determined that to prevent similar occurrences, employers should:

On September 24, 1996, a 17-year-old male laborer (the victim) suffered amputation of both legs after he fell into an operating horizontal hydraulic baler at a county resource recovery facility. On September 26, 1996, officials of the U.S. Department of Labor, Employment Standards Administration, Wage and Hour Division notified the Division of Safety Research (DSR) of the incident, and requested technical assistance. On November 13, 1996, a DSR safety engineer interviewed the plant manager at the incident site. The incident site was examined and photographs and measurements were taken. The victim was interviewed and the incident was reviewed with the Wage and Hour compliance officer assigned to the case.

The employer was a county resource recovery facility, in operation for about 2½ years prior to the incident. Twenty-five workers were employed at the facility, 20 on a 7:30 a.m. to 4:00 p.m. day shift, and five workers were on the second shift, from 4:00 p.m. to 12:00 a.m. The facility accepts and processes municipal and non-hazardous industrial waste during the day shift and bales recyclable plastic, paper, and cardboard during the second shift.

The victim had been working at the facility for about 3 months prior to the incident. During the summer school vacation he worked on the day shift sorting recyclables from the waste. After summer vacation he had transferred to the second shift so that he could attend classes at the county vocational technical school. The employer’s safety program included a first day hazard orientation for new employees and daily safety meetings. Employees were instructed to follow lockout/tagout procedures when working on any of the machines in the facility, including the baler and conveyors. Additionally, the employer’s safety policy prohibited any employee with the job classification of laborer from operating or servicing machinery. The employer provided personal protective equipment (PPE) including hard hats, safety glasses, masks, and gloves.

The 200 ton/day-capacity facility had been specifically designed to recover and process recyclable material from municipal waste. Bagged refuse was collected from curbside pickups and deposited on the inside tipping floor. From there the material went through a sorting process which extracted all recyclables including various types of plastic, glass, and metal. Once these were recovered from the waste, the remaining paper and food scraps were pelletized into boiler fuel. This activity was performed continuously during the day shift. Work activity during the second shift was limited to baling plastic, paper, and cardboard recyclables. The facility also processed paper scrap from area paper mills.

Although power to the baler was controlled by the computer which controlled all the process machinery, it was equipped with its own control panel and operated as a “stand-alone” machine.

When baling cardboard, the workers ripped the material by hand into small pieces which were fed into the horizontal closed chamber baler (see Figure 1) by an inclined conveyor measuring 4 by 25 feet. The material was loaded into a hopper at the tail end of the conveyor. From there, the material went up the conveyor and was discharged into a feed chute connected to the feed hopper of the baler. A photo-electric sensor located on the side of the baler feed hopper sensed the presence of a load and automatically activated the ram. The machine operated in this fashion until a bale was completed, at which time the machine ceased automatic operation and sounded an alarm to alert the operator that the bale was completed and ready for tying and unloading. The operator then switched machine control to hand (manual) operation, tied the bale, and opened the baling chamber door. The ram was advanced manually, to eject the completed bale, which was removed by fork lift and transported to a storage area. The ram was retracted, the baling chamber door was closed, and the machine was switched back to automatic operation. 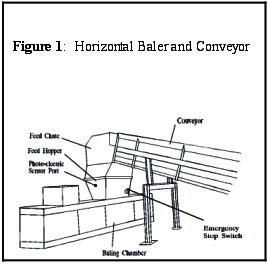 On the day of the incident, the victim, along with five co-workers and a machine operator/foreman, was processing rolled cardboard. Three of the co-workers were located 25 to 30 feet away from the feed hopper, manually tearing small pieces of cardboard from the rolls, which the victim then loaded into the conveyor hopper. The baler was operating in automatic mode at this time. Shortly before 7:40 p.m., cardboard jammed in the feed chute. The victim attempted to clear the jam by inserting a stick through the photo-electric sensor port located on the side of the feed chute. This was unsuccessful, and the victim shut down the conveyor, climbed up on it, and made his way up to the feed chute opening. There, he used his feet to push the jam free while holding onto the cover above the baler feed chute (Figure 2). When the jam cleared, the victim slid down into the baling chamber. He was climbing out when the ram automatically advanced and caught his foot, pulling him back in and amputating both his legs near the knees. The co-workers heard his calls for help, ran to the baler, and activated the emergency stop switch located on the baler feed chute under the conveyor head roller. The foreman called 911 while a co-worker went to the victim’s home and notified his family. The family came to the incident site and removed the victim from the machine. He was transported to a nearby emergency room and then transferred to a large metropolitan hospital for further treatment. 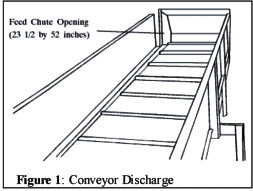 Recommendation No. 1: Employers should ensure that procedures for control of hazardous energy (lockout/tagout) are implemented by workers when it is necessary to perform maintenance, including clearing jammed material from process machinery.

Discussion: The victim had de-energized the conveyor prior to climbing onto it. However, the baler remained energized with the controls set to automatic, requiring only a signal from the photo-electric sensor to start the ram’s compression cycle. When the victim freed the jammed material and fell into the feed hopper the photo-electric sensor was triggered and the ram started its cycle. The machine was equipped with a lockable power disconnect device located next to the drive motor and hydraulic system. At the time of the site visit, this device was operating correctly. Appropriate hazardous energy control procedures include strict prohibitions against workers clearing jams while machines are energized, and require disconnect devices to be physically locked out to ensure that balers cannot be inadvertently activated.

Recommendation No. 2: Employers should comply with child labor laws which prohibit youth less than 18 years of age from operating or assisting to operate paper balers.

Discussion: The Fair Labor Standards Act provides a minimum age of 18 years for nonagricultural occupations which the Secretary of Labor “shall find and by order declare” to be particularly hazardous for 16 and 17-year-old persons. The Secretary has issued 17 Hazardous Occupations Orders. Hazardous Occupation Order No. 12 (HO 12) prohibits 16-and 17-year-olds from operating or assisting to operate paper balers or compactors. A limited exemption from this prohibition is allowed by the Compactors and Balers Safety Standard Modernization Act of 1996, Public Law 104-174 which provides that 16 and 17-year old workers are allowed to load only (place materials in), but not operate or unload materials from, scrap paper balers and cardboard box compactors provided that the machines meet certain operation and construction standards. The machine in the incident did not meet all of the standards. The Act requires that: