A 23-year-old male timber cutter/skidder operator (the victim) was in the process of felling a cherry tree at a rural logging site when he was struck and killed by a falling tree. The victim and two co-workers were performing separate logging operations when the incident occurred. One co-worker (equipment operator) was operating a bulldozer while the victim and another co-worker (timber cutter) were felling trees within the same work area. Using a chain saw, the victim made an undercut on one side of the cherry tree, then moved to the opposite side of the tree and began a back cut. At the same time, the co-worker was felling a 90-foot cucumber tree approximately 60 feet from the victim. As the co-worker make the back cut in the cucumber tree, the holding wood was cut through. The cucumber tree twisted on its stump, causing it to fall perpendicular to its intended direction of descent. The tree fell onto the victim, striking him on the back. He died shortly thereafter. NIOSH investigators concluded that, to prevent similar occurrences, employers should:

On January 28, 1994, a 23-year-old male timber cutter/skidder operator (the victim) was struck and killed by a tree that had been felled by a co-worker. On February 7, 1994, officials of the local county sheriff’s office were contacted by the Division of Safety Research (DSR) about this fatality and were offered technical assistance. On February 8, 1994, a DSR safety specialist investigated this incident. The investigator reviewed the incident with the county sheriff, the victim’s co-worker and employer, and the OSHA compliance officer assigned to the case. Photographs, as well as the coroner and police reports, were obtained during the investigation.

The employer in this incident was a small logging company, with five employees, that had been in operation for about 21 years. The employer did not have a written safety policy, safety program, or established safe work procedures at the time of the incident. The owner/foreman and one worker had been certified in first aid and cardiopulmonary resuscitation prior to the incident. The victim had been employed by the company for 1 year. This incident was the first fatality the company had experienced.

A lumber company had purchased the timber rights to an 8-acre tract of land where a variety of hardwood trees were to be harvested. The lumber company contracted the victim’s employer to selectively cut the timber and transport it to their sawmill. The day of the incident was the first day at the work site, and the tree involved in the incident was the third tree that had been cut for this timbering job. Four workers were present at the work site—the owner/foreman, one timber cutter/skidder operator (the victim), one timber cutter, and one equipment operator. The terrain was a gentle, rolling mountain slope with less than a 5-percent grade.

Early on the morning of the incident, the employees arrived at the jobsite and commenced cleaning chain saws and performing other preparatory work. After lunch, the workers discussed whether or not to continue work, since it had been raining all morning. Everyone agreed to continue work and the equipment operator boarded the bulldozer and began clearing a roadway to the landing. The owner/foreman started walking the boundary line of the 8-acre tract while the victim and timber cutter walked to the jobsite. After arriving at the jobsite, the victim, who had been assigned to limb (remove limbs from a felled tree), and set chokers (place a length of wire rope around the end of logs to be skidded to the landing), apparently decided to fell a number of trees before he started limbing. He felled one tree, then moved to another. He completed an undercut on the second tree, then moved to the opposite side and began to make a back cut (Figure 1). In the meantime, the timber cutter, who was working approximately 60 feet away, had felled one tree and moved to another. He began felling a cucumber tree that was 90-feet long, and 21 inches in diameter at the butt. The timber cutter first made an undercut (a wedge-shaped cutout or notch that controls the direction of fall of a tree). He then made a back cut (the final cut in felling a tree, made on the side opposite the undercut and direction of fall). In making the back cut, the holding wood/hingewood (section of wood located between the undercut and the back cut, which prevents the tree from prematurely slipping or twisting from the stump, and controls the direction of fall), was cut completely through. The undercut was made in such a manner that the tree was to have fallen at a 90-degree angle away from the victim. But when the back cut was made, the holding wood was cut through, allowing the tree to twist on its stump and fall in the direction of the victim (Figure 2). The victim, who was stooped over using a chain saw to fell the cherry tree, was struck on the back. The tree was approximately 9 inches in diameter where it struck the victim.

The timber cutter saw the tree strike the victim and he ran to his aid. He observed the victim was breathing and conscious, but trapped beneath the tree. He cut the tree trunk in half, and removed the victim. He contacted the equipment operator to call for assistance, and then contacted the owner/foreman. The owner/foreman arrived at the incident scene and checked the victim for a pulse and breathing. When neither was detected, he performed cardiopulmonary resuscitation (CPR) until fire department personnel arrived. The local fire department personnel arrived in about 22 minutes and continued CPR until the victim was transported to the hospital. The victim was pronounced dead upon arrival at the hospital.

The medical examiner’s report listed the cause of death as crushing injuries to the back.

Recommendation #1: Employers should ensure that workers are assigned to separate work areas.

Discussion: Two workers, a timber cutter and the victim, were working within 60 feet of one another when the incident occurred. 29 CFR 1910.266(e)(1)(i) states “Work areas shall be assigned such that a tree cannot fall into an adjacent work area. The recommended distance between workers is twice the height of trees being felled.”

[Note: Currently, OSHA standard 1910.266 applies to pulpwood logging but does not apply to the logging of sawtimber-sized trees, the type involved in this incident. OSHA is revising its logging regulations to include all types of logging operations. Although not enforceable, sections of 1910.266 of the pulpwood standard, particularly relating to safe work practices, are relevant to this case.]

Discussion: The victim was struck and killed by a falling tree as he was felling another tree about 60 feet away. The tree that struck him had been undercut in such a manner that it was supposed to have fallen away from the victim. However, when the backcut was made, the holding wood was cut through, causing the tree to twist on its stump and fall in the direction of the victim, approximately 90 degrees away from the intended direction of fall.

Discussion: Conducting regular safety inspections of all logging tasks—among other safety-related responsibilities—by a competent person will help ensure that established company safety procedures are being followed. Additionally, scheduled and unscheduled safety inspections of tree-felling worksites clearly demonstrate that the employer is committed to the safety program and to the prevention of occupational injury. 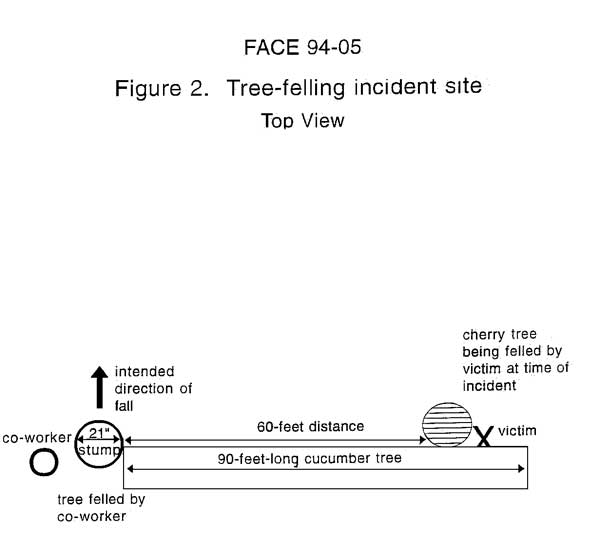