A 30-year-old construction laborer (the victim) died at a highway construction site when the vehicle he was driving collided with an earth-moving vehicle (scraper). Throughout the day the victim had been performing various tasks that he had been assigned, including driving a truck equipped with a water tank to disperse water over the dirt roadbed of a new highway under construction. No seat belt restraint system was installed in the truck. At approximately 2:30 p.m. the victim was driving the truck south at an estimated 45 miles per hour and watering the roadbed. At the same time another worker was driving a fully loaded scraper in the opposite direction on the same section of roadbed. As the vehicles approached one another, the water truck veered sharply to the left into the path of the oncoming scraper. The front of the water truck struck the left front tire, wheel assembly, and fender of the scraper and the truck overturned. The victim died instantly as a result of massive head injuries sustained in the collision and was pronounced dead at the site by the county coroner. NIOSH investigators concluded that, in order to prevent future similar occurrences, employers should:

On May 22, 1992, a 30-year-old male construction laborer (the victim) died when the vehicle he was driving struck an earth-moving vehicle (scraper). On May 30, 1992, officials of the South Carolina Occupational Safety and Health Administration (SCOSHA) notified the Division of Safety Research (DSR) of this fatality and requested technical assistance. On June 30, 1992, a safety specialist from DSR conducted an investigation of this incident. The investigator reviewed the incident with the vice president of the company, the SCOSHA compliance officer assigned to the case, and the coroner within the county were the incident occurred. The investigator traveled to and photographed the incident site.

The employer was a highway construction company that had been in operation for 40 years. The company employed 60 workers, including 10 construction laborers. The company had a safety program with written safety procedures which were administered by the owners. Although the company had a safety program, there were no written procedures regarding the use of seat belts, following established driving speeds, or recognizing and avoiding vehicular-related hazards in the workplace. The safety program included the disciplinary procedures of verbal warning, written warning, and ultimate suspension for violation of company safety rules. To date, no one had ever been discharged for violation of safety rules. The company vice president served as safety officer on a collateral duty basis. The company held biannual company-wide safety meetings, as well as quarterly meetings involving key personnel and monthly on-the-job meetings. Employees received on-the-job training. The victim had worked for 2 years as a construction laborer for this employer, and he had been working at this construction site for 1 year. This was the second vehicle-related incident experienced by the company in the past 2 years, and the third such fatality.

Work at a new multi-lane interstate highway construction site had been in progress about 1 year. On the day of the incident, the victim arrived at the construction site for his 8 a.m. to 6 p.m. shift. He was assigned a variety of tasks, including watering the roadbed for a new section of the highway. The watering was accomplished by driving an R-68 Mack straight- chassis, single-axle, dual-wheel truck, equipped with a 2,000 gallon water tank, over the roadbed at regular intervals to keep dust at a minimum. Although no training was provided for this task, the water truck was supposed to have been driven at 15 to 20 miles per hour, according to verbally issued company standard operating procedures. The water truck was not equipped with any type of seat belt restraint system.

At approximately 2:30 p.m., the victim was watering the roadbed, which was 79 feet wide. He was driving the water truck, with approximately 800 gallons of water remaining in the tank, an estimated 45 miles per hour in a southerly direction. A fully loaded 631-D Caterpillar earth-moving vehicle (scraper), carrying approximately 30 cubic yards of dirt, was approaching in the opposite direction at about 25 miles per hour. As the vehicles closed to within approximately 130 feet of one another, the water truck ran over the roadbed crown–the elevated center of a road surface constructed to encourage drainage, went out of control, and turned sharply to the left (Figure). The scraper driver noticed the water truck approaching and steered the scraper to the right. The front of the water truck struck the scraper’s left front tire, wheel assembly, and fender, and overturned. Upon impact, the victim was partially thrown through the windshield, striking his head.

The scraper driver stopped his vehicle and ran to the victim’s aid while a mail carrier, who observed the incident from an adjacent two-lane roadway, called the emergency medical service (EMS). The scraper driver performed cardiopulmonary resuscitation within 1 to 2 minutes after the incident, and the EMS, which arrived within 10 minutes of being called, continued CPR until the county coroner arrived. The coroner pronounced the victim dead at the scene 30 minutes after the incident occurred.

The county coroner reported the cause of death as massive head injuries.

Recommendation #1: Employers should ensure that all construction vehicles, where applicable, are properly equipped with seat belt restraint systems.

Discussion: The water truck used to water the roadbed was not equipped with a restraint system of any type. OSHA standard 1926.602(a)(2)(i) states that “Seat belts shall be provided on all equipment covered by this section and shall meet the requirements of the Society of Automotive Engineers, J386-1969, Seat Belts for Construction Equipment.” This regulation establishes minimum requirements for a pelvic restraint belt, Type 1 system (lapbelt only for pelvic restraint) suitable for use on construction equipment. Employers should ensure that seat belt restraints are installed in all appropriate construction vehicles.

Recommendation #2: Employers should evaluate the current safety program and incorporate specific written procedures detailing the importance of the proper use of seat belts, of following established driving speeds, and of recognizing and avoiding vehicular-related hazards in the workplace.

Discussion: Although the company had a written safety program, there were no provisions for the use of seat belts, for following established driving speeds, and for recognizing and avoiding vehicular-related hazards in the workplace. A verbal standard operating procedure for operating equipment at certain speeds was said to have existed. Safety programs should be evaluated and written procedures incorporated with particular emphasis on the importance of the proper use of seat belts. Written procedures detailing established driving speeds and the recognition and avoidance of potential vehicular-related hazards, such as crowns in the roadbed, should also be included. For these procedures to be effective, they must be clearly communicated and fully understood by the affected employees and supervisors.

Discussion: The water truck had the capability of being operated at the maximum speed of between 60-70 miles per hour. The verbal standard operating procedure was for the truck to be driven between 15 and 20 miles per hour when used to water the roadbed. The installation of a governor to limit speed prevents drivers from exceeding safe speeds for specific types of vehicles. 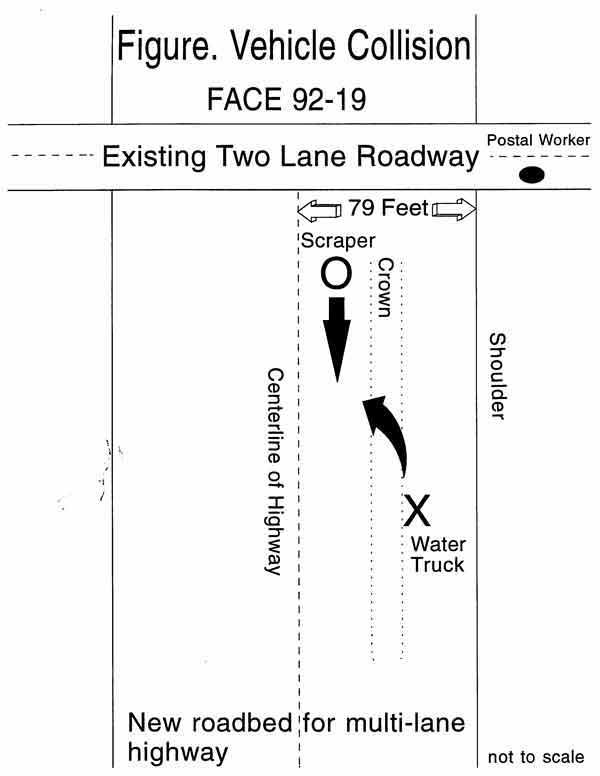