On July 2, 2001, a 17-year-old male warehouse laborer (the victim) was fatally injured when the sit-down-type forklift he was operating tipped over and crushed him. The victim apparently lost control of the forklift, which had a load on its forks and the mast fully extended, as he was making a right turn, causing the forklift to tip over 90 degrees onto its left side. The unrestrained victim was crushed under the extended boom/mast of the forklift. Fire department personnel responded 7 minutes after receiving a 911 call from company personnel and, together with police officers, pulled the victim clear as company employees used two forklifts to lift the forklift from the victim. The victim was unconscious and bleeding from head injuries. First aid was provided by emergency medical services (EMS) personnel and the victim was transported to an area hospital where he was pronounced dead at 1:35 p.m, approximately 25 minutes after the incident. 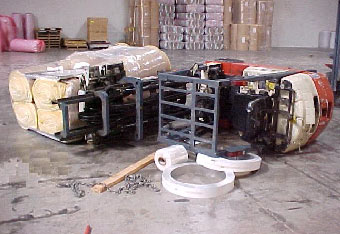 Forklift used the day of the incident.

On July 2, 2001, a 17-year-old male warehouse laborer (the victim) died when the forklift he was operating tipped over and crushed him. On July 6, 2001, the U.S. Department of Labor, Wage and Hour Division, notified the National Institute for Occupational Safety and Health (NIOSH), Division of Safety Research (DSR), of the incident. On January 10, 2002, a DSR occupational safety and heath specialist met with representatives of the Arizona State Labor Department which enforces State child labor laws, the Arizona Division of Occupational Safety and Health (ADOSH) which enforces occupational safety and health regulations, and with representatives of the U.S. Department of Labor, Wage and Hour Division, which enforces Federal child labor laws, to discuss their findings and review case files. Photographs of the incident scene taken by these agencies were reviewed. Official investigative reports from the responding police department and the medical examiner’s office were also reviewed. A telephone interview was conducted with the equipment dealer who maintained the forklift for the company and who examined the forklift following the incident. The employer’s representative was interviewed by telephone.

The employer was a custom insulation wholesaler that had been in operation for 20 years. The company had 10 locations throughout the United States and employed 150 workers. The plant where the incident occurred had been purchased 3 years before the incident and employed 7 workers. The victim was the only worker in the company’s 10 locations who was under 18 years of age. Of the seven workers at the incident site, four had duties in the warehouse where production work took place, and three worked in the office. The warehouse workers included a foreman, a machine/forklift operator, and the victim, all of whom operated the laminating and cutting machine, moved insulation manually, and moved materials with a forklift, and one worker who did manual labor and operated the laminating and cutting machine, but not the forklift.

The employer’s safety policies and training were unwritten. New employees were provided basic orientation to the manufacturing process and were provided on-the-job training by other employees. The company did not have a formalized forklift operator training program. The victim had been working for 5 days before the incident. His prehire application indicated that he had 5 months previous warehouse work experience; experience in operating a forklift was not indicated. Witness statements suggest that the victim told the foreman and machine/forklift operator that he had 4 to 5 months of forklift experience. The company’s representative maintained that the victim had been hired to load and unload trucks and to set loads up for the forklift operator. Although the victim had not been hired to operate the forklift or cutting machine, this information had apparently not been communicated to the foreman or forklift operator as they had given the victim on-the-job training which included operating the laminating/cutting machine, moving materials manually, bagging the insulation, operating the forklift, and cleaning up the warehouse. This was the company’s first workplace fatality.

The company involved in this incident uses fiberglass insulation purchased from other companies, laminates a special backing to one side of the insulation, and then cuts the insulation to customer specifications. The laminated fiberglass insulation, which is the final product, is then used to insulate prefabricated metal buildings. Work is completed in a 2,600-square-foot warehouse which contains the laminating/cutting machine, fiberglass and other supplies. The company’s office was located in a corner of the warehouse. The sit-down-type forklift operated by the victim on the day of the incident was normally used to move rolls of insulation within the warehouse and to load insulation onto trucks.

The sit-down-style forklift driven by the victim at the time of the incident was purchased from an authorized dealer by the employer in August 1999 and was maintained on a regular basis through a maintenance agreement with the dealer. The forklift used LP fuel and was equipped with a cascade clamp used to grab the bundles of insulation.

According to the ADOSH compliance officer who investigated the incident, the forklift was found toward the center of the warehouse and on its left side. Both the ADOSH and equipment dealer’s reports indicated that the mast was fully extended (187 inches) with a load of fiberglass rolls weighing approximately 440 pounds held in a clamp attached to the mast (Photo 2). The back steering wheels of the forklift were slightly turned to the left, the driving gear was engaged in forward gear, and the seat belt was wedged between the seat and armrest. Evidence suggests that the forklift was operated with the mast fully extended and that it tipped over as the victim turned to the right.

The ADOSH compliance officer and the dealer’s representative inspected the forklift following the incident and found no evidence of malfunction or defects in the forklift. The forklift was returned to service after repair of the damage that had occurred as a consequence of the tip-over.

Following the incident, the employer established a company-wide policy that requires operator training and certification for all employees assigned to operate forklifts. Under the new policy, only trained and certified operators are given forklift ignition keys. The keys are to be kept in the operator’s possession at all times and are never to be left in an unoccupied forklift. The employer’s representative reported that the victim’s age had not been validated upon hire and that they thought he was 19 years old. Following the incident, the employer instituted a company-wide policy that requires proof of age upon hire and restricts hiring to workers 18 years of age or older.

The coroner’s report stated the cause of death was blunt-force injuries of the chest and neck and traumatic asphyxia.

Discussion: Employers should establish a policy that requires pre hire validation of the prospective employee’s date of birth. Once the age of the employee has been validated, employers should ensure that workers less than 18 years old are not assigned to perform prohibited work. If employers do not fully understand the types of work prohibited for workers under the age of 18, they should contact the U.S. Department of Labor, Employment Standards Administration, Wage and Hour Division. This Division enforces child labor laws under the Fair Labor Standards Act (FLSA).

The Fair Labor Standards Act (FLSA) prohibits employment of workers younger than age 18 in nonagricultural occupations which the Secretary of Labor has declared to be particularly hazardous. Hazardous Order (HO) No. 7 prohibits persons below the age of 18 from operating power-driven hoisting apparatus including high-lift trucks (i.e., forklifts). Another task assigned to the youth in this incident involved using a cutting machine, determined by the Wage and Hour Division to be a guillotine shearing machine. HO No. 14 prohibits persons below the age of 18 from operating guillotine shearing machines. Information regarding the FLSA can be obtained by visiting the DOL ESA website.1 FLSA employment standards for nonagricultural occupations are listed and explained in WH-13302 and summarized in DOL Fact Sheet No. 43.1 Child labor information can also be obtained by calling or visiting offices of Federal and State child labor departments, located by using the telephone directory government pages.

Employers should meet with their workforce to communicate the company’s policies regarding appropriate work assignments for young workers. They should explain that young workers are at increased risk for injury at work and reinforce the importance of assigning youths to appropriate work tasks.

Recommendation #2: Employers should develop, implement, and enforce a comprehensive written safety program for all workers which includes training in hazard recognition and the avoidance of unsafe conditions. The comprehensive training plan should identify required specialized training, i.e., training for forklift operators.

Discussion: A comprehensive safety program should be developed for all workers that includes training in hazard recognition and the avoidance of unsafe conditions. It should then be noted in a company’s comprehensive safety program that certain types of training, i.e., training in forklift and cutting machine operation, is limited to workers who are at least 18 years of age. All employees should be instructed that they are not to provide forklift operator training unless they are certified to train forklift operators and are assigned to this task.

OSHA requires the employer to certify in writing and identify by name each operator that has been trained, the date of the training, the date of the evaluation, and the identity of the person(s) performing the training or evaluation. This training in forklift operation should be given by a person who has the knowledge, training, and experience necessary to train operators and should consist of a combination of formal instruction (i.e., lecture, discussion, interactive computer learning, videotape, written material), practical training (demonstrations performed by the trainer and practical exercises performed by the trainee), and evaluation of operator performance in the workplace. The requirements for training forklift operators are stipulated in Part 29 Code of Federal Regulations, 1910.178 (l) operator training.3

Recommendation #3: Employers should identify and label equipment that is not to be operated by young workers less than 18 and provide keys to only trained and authorized machine users.

Discussion: Employers can obtain labels that indicate “STOP- YOU MUST BE 18 TO OPERATE OR CLEAN THIS EQUIPMENT” from the local Wage and Hour Office of the U.S. Department of Labor (Photo 3). These labels should be affixed in a conspicuous place on those machines that youths are not allowed to operate. As an additional safety precaution, employers should ensure that keys used to operate machines are in the possession of only those select workers whom they have authorized and trained to use the machines.

Additionally, equipment manufacturers should consider placing a warning decal on equipment that indicates it is not to be operated by workers less than 18 years and note this restriction in the operator’s manual.

Manufacturers can obtain assistance in identifying machines that are not to be used by workers less than 18 years old by calling their local DOL Wage and Hour Division office. These offices can be located by using the telephone directory government pages.