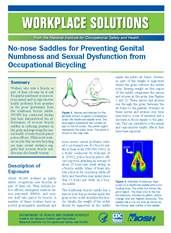 Workers who ride a bicycle as part of their job may be at risk for genital numbness or more serious sexual and/or reproductive health problems from pressure in the groin (perineum) from the traditional bicycle saddle. NIOSH has conducted studies that have demonstrated the effectiveness of no-nose bicycle saddles in reducing pressure in the groin and improving the sexual health of male bicycle patrol police officers. While most workers in jobs that involve bicycling are men, recent evidence suggests that no-nose bicycle saddles may also benefit women.