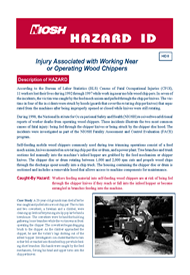 According to the Bureau of Labor Statistics (BLS) Census of Fatal Occupational Injuries (CFOI), 11 workers lost their lives during 1992 through 1997 while working near mobile wood chippers. In seven of the incidents, the victim was caught by the feed mechanism and pulled through the chipper knives. The victims in four of the incidents were struck by hoods (guards that cover the rotating chipper knives) that separated from the machines after being improperly opened or closed while knives were still rotating.

During 1998, the National Institute for Occupational Safety and Health (NIOSH) received two additional reports of worker deaths from operating wood chippers. These incidents illustrate the two most common causes of fatal injury: being fed through the chipper knives or being struck by the chipper disc hood. The incidents were investigated as part of the NIOSH Fatality Assessment and Control Evaluation (FACE) program.

Self-feeding mobile wood chippers commonly used during tree trimming operations consist of a feed mechanism, knives mounted on a rotating chipper disc or drum, and a power plant. Tree branches and trunk sections fed manually into the machine’s infeed hopper are grabbed by the feed mechanism or chipper knives. The chipper disc or drum rotating between 1,000 and 2,000 rpm cuts and propels wood chips through the discharge spout usually into a chip truck. The housing containing the chipper disc or drum is sectioned and includes a removable hood that allows access to machine components for maintenance.

Caught-By Hazard: Workers feeding material into self-feeding wood chippers are at risk of being fed through the chipper knives if they reach or fall into the infeed hopper or become entangled in branches feeding into the machine.

Case Study: A 28-year-old groundsman died after he was caught and pulled into a wood chipper. The victim and two coworkers, a foreman and a climber, were cleaning up limbs after pruning a tulip poplar behind a townhouse. The coworkers were behind the building gathering loose branches while the victim was in front operating the chipper. The coworkers began dragging brush to the chipper. As the climber approached the chipper, he saw the victim’s legs sticking out of the infeed hopper. Investigators concluded that the victim either fell or reached into the infeed hopper while feeding short branches. His hands were caught by the feed mechanism, forcing his head and upper torso into the chipper knives.

Struck-By Hazard: Workers are at risk of being struck by unlatched, improperly secured, or damaged or improperly maintained hoods that may be thrown from the wood chipper after contacting the rotating chipper knives.

Case Study: A 46-year-old laborer at a municipal waste-management facility died after he was struck by the flying chipper disc hood from an operating brush chipper. He had been feeding material into a chipper that had been converted to a stationary machine. He had shut off the chipper to remove jammed material, but opened the hood before the chipper disc had stopped completely. The rotating disc hit the hood as he opened it and tore it loose from its hinges. The hood struck the victim in the head and chest. He died the next day without regaining consciousness. Investigation showed that the hood hinges had been damaged, allowing excessive side movement as the hood was swung open.

To protect workers from being caught by the chipper feed mechanism, employers should ensure the following:

To protect workers against being struck by flying hoods covering chipper discs or drums, employers should ensure the following:

The FACE Program is conducted by NIOSH. The objective of the program is to identify work situations at high risk for fatal injury and formulate and disseminate prevention strategies to those who can intervene in the workplace.