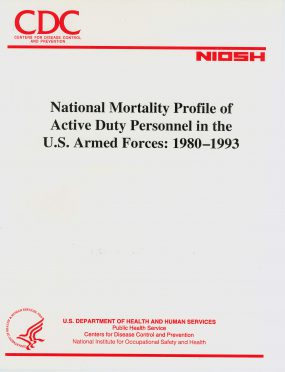 We dedicate this report to the memory of the thousands of men and women who have died while actively serving their country in the U.S. Armed Forces. These airmen, soldiers, marines and sailors (many of whom volunteered for military service) honorably performed their duties not only in the U.S. but at many other, often remote, locations throughout the world-frequently without their families and loved ones.

Between 1980 and 1993, men and women on active duty accounted for more than 28 million person-years of service in the four military branches and over 27,000 died while on active duty. During this period, an average of 1,934 military personnel died annually-about 5 per day. Although any loss of life is a tragedy, those who die while engaged in hostile action or war often are the most notable or memorable; however, such deaths accounted for only 2% of the total. Far more common were the military personnel who died from unintentional injuries that occurred during their day-to-day activities on and off duty; these deaths accounted for 60% of the total, or 16,330 deaths.