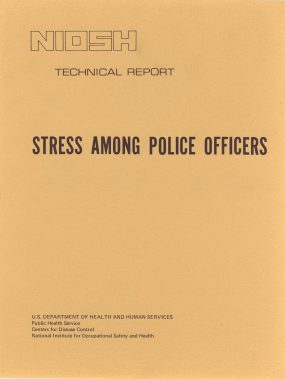 A survey of stress among police officers (SIC-9221) was conducted. A total of 8664 questionnaires were administered to police officers in 19 departments around the United States. The questionnaires were designed to evaluate job stressors and relevant personal and family factors. A total of 2258 patrol officers returned the completed forms. Respondents were near the middle of a scale of socially desired behavior, but were above average on the type-A personality scale, indicative of coronary risk. Job insecurity and role conflict showed the most significant correlation with negative health and emotional states. Musculoskeletal problems, hypertension, mental illness or nervous breakdown, and gastrointestinal difficulties were the most frequently reported health disorders. The frequency of divorce among patrol officers was excessive and was considered indicative of significant strain. Opportunities for discussion and interaction with police management about job roles and expectations and more social contacts with the public were viewed by most respondents as being beneficial. The authors conclude that major problems of stress among patrol officers involve needs for greater clarification of their job roles which should take into account perceptions and expectations of others with whom they interact both on and off the job.