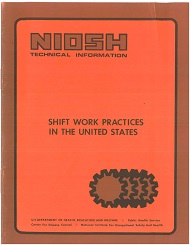 The purpose of this investigation was to determine the types and distribution of shift work systems and the distribution of workers within the major shift work industries and service groups in the United States. Sources of data utilized in fulfilling this task were agencies (such as U.S. Department of Labor, Bureau of Labor Statistics; U.S. Department of the Interior), management consulting firms for particular industries (such as Northern Textile Association), unions (such as United Mine Workers), and trade associations (such as Air Traffic Controllers Association). The most comprehensive data source was the Bureau of Labor Statistics, which maintains information regarding work starting times for major industries throughout the United States. The results indicate that there are numerous shift schedules and many systems of rotation. These vary in complexity and differ across industries, companies, and occupations. The hospital, transportation, food processing, and health care industries/occupations were identified as employing the highest percentage and absolute number of shift workers, while the chemical, lumber and wood products, and textile industries were identified as among the lowest. The authors discuss the lack of a central, systematic data source for obtaining information of shift scheduling and recommend directions for future research. (Contract No. 210-75-0072)