Rhabdomyolysis in Wildland Fire Fighters: A Patient Population at Risk 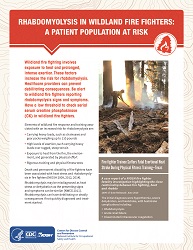 Elements of wildland fire response and training associated with an increased risk for rhabdomyolysis are: