NIOSH List of Antineoplastic and Other Hazardous Drugs in Healthcare Settings, 2014 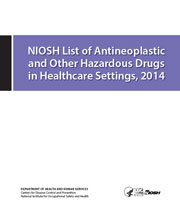 The National Institute for Occupational Safety and Health (NIOSH) Alert: Preventing Occupational Exposures to Antineoplastic and Other Hazardous Drugs in Health Care Settings was published in September 2004. In Appendix A of the Alert, NIOSH identified a sample list of major hazardous drugs. The list was compiled from information provided by four institutions that had generated lists of hazardous drugs for their respective institutions, as well as a list from the Pharmaceutical Research and Manufacturers of America (PhRMA). The 2004 list was updated in 2010 and 2012. The current update (2014) adds 27 drugs and includes a review of the 2004 list and the consequent removal of 12 drugs that did not meet the NIOSH criteria for hazardous drugs. In addition, a new format has been developed for the list of hazardous drugs, as described below. The review process for the addition of the new listings is described in the Federal Register: https://www.cdc.gov/niosh/docket/review/docket233/pdf/CDC-2013-0007.pdfpdf icon.

The National Institute for Occupational Safety and Health (NIOSH) of the Centers for Disease Control and Prevention (CDC) has proposed updates to its list of hazardous drugs for 2016.  This list includes drugs reviewed by NIOSH from January 2012 to December 2013. NIOSH is soliciting comments on the addition of these drugs to the 2014 listpdf icon . Additional information for the 2016 update can be found at: Federal Register Noticepdf icon .

The following drugs were recently approved by the FDA. The manufacturers of these drugs recommend that they be handled as hazardous drugs. NIOSH will review these drugs during its next review cycle. For additional information, see the drug package inserts for each drug. Future additions to this list will be posted as they become available.

NIOSH List of Antineoplastic and Other Hazardous Drugs in Healthcare Settings, 2014pdf icon