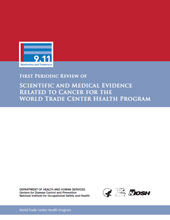 The review is based on three information sources. First, a systematic search was conducted for peer-reviewed findings on exposure and cancer resulting from the September 11, 2001, terrorist attacks that have been published in the scientific and medical literature between September 11, 2001, and July 1, 2011. Second, findings and recommendations related to cancer were solicited from the WTC Clinical Centers of Excellence and Data Centers, the WTC Health Registry at the New York City Department of Health and Mental Hygiene, and the New York State Department of Health. Third, information from the public about cancer was solicited through a Request for Information published in the Federal Register on March 8, 2011, and March 29, 2011.