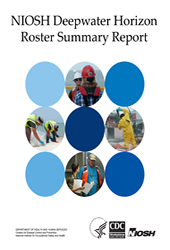 On April 21, 2010, the Deepwater Horizon oil drilling rig in the Gulf of Mexico caught fire and sank, causing crude oil to gush from the well at the sea floor. The leaking well was capped on July 15, 2010, and on September 19, 2010, a relief well was completed. Thousands of workers3 responded to the onshore and offshore cleanup activities. The Unified Area Command reported over 45,000 workers at the height of the response [Unified Area Command 2010]. The National Institute for Occupational Safety and Health (NIOSH) was asked to support the Unified Area Command to establish a systematic roster of workers participating in response cleanup efforts, by obtaining information at the time of training or from safety and on-site supervisory officials.

The concept for the worker roster was developed by the Emergency Responder Health Monitoring and Surveillance Interagency Workgroup coordinated by NIOSH [NIOSH 2011]. This group drafted recommendations that roster information be collected prospectively rather than retrospectively, as occurred during the World Trade Center event in 2001, which proved to be difficult and time-consuming. NIOSH developed this prospective roster with the following objectives: (1) to create a record of those who participated in the Deepwater Horizon response cleanup activities, (2) to collect information on the nature of their projected work assignments and training received, and (3) to create a mechanism for contacting them about possible work-related symptoms of illness or injury, as needed. The Unified Area Command and BP supported the roster with the goal of identifying all workers involved in all response/cleanup activities.