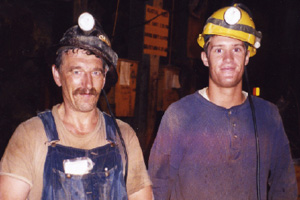 Taken at the Galena Mine, an underground silver mine in North Idaho. Photo by Elaine Cullen.

As part of the normal aging process, the human body undergoes change that may affect health and safety on the job. Many age-related changes may begin as early as the mid 30s and result in decreasing physical, sensory, or cognitive capabilities. An older worker may not necessarily have a higher risk of injury than a younger worker overall; however, the effects of a musculoskeletal injury (MSI), for example, on the older worker may be more severe.

Occupational safety and health issues in an aging workforce are a concern and one of the many research priorities of the National Institute for Occupational Safety and Health (NIOSH). Research teams from NIOSH reviewed age-related factors that affect the safety and health of miners, and determined through field studies how age-related effects such as change in ability could be accommodated for in the workplace to reduce the risk of injury among all miners.

On the basis of this research, NIOSH investigators designed an educational program for miners to help workers understand certain age-related risks, suggest ways to modify the workplace to accommodate older workers, and reduce the risk of injury among this working population. Age Awareness Training for Miners is a program for both managers and employees, and includes information about the normal processes of aging that could be expected to occur during a person’s working life.

The goals of this program are to educate the mining workforce on normal physical and cognitive changes that occur during a person’s working lifespan, and to inform employers and employees about how jobs can be engineered to match a worker’s changing capabilities. This training is intended to be conducted at the workplace and includes materials aimed at keeping miners healthier on and off the job. The training modules can be presented in any order and include topics such as change in vision, hearing, attention, memory, and flexibility.

A follow-up assessment at the training test site revealed that workers older than 40 years of age were most interested in the training; however, some of the younger workers were also really impacted by the material according to the mine’s safety and health supervisor. He noted that the workplace improvements made on the basis of the Age Awareness Training for Miners had been considered before but became a priority after the training occurred. Workplace modifications and improvements made after this training included eliminating standing water, controlling spillage around conveyer belts, installing additional lighting, reducing equipment noise levels, and applying anti-glare film on vehicle windows. Ongoing education, training, and appropriate workplace modifications are crucial to reducing injury and illness in the mining industry. By providing training such as Age Awareness Training for Miners, NIOSH is positively impacting occupational safety for miners of all ages.

Visit www.cdc.gov/niosh for more information about older workers and the effects of an aging workforce on workplace safety and health. Authors of Age Awareness Training for Miners—William Porter, Launa Mallett, Diana Schwerha, Sean Gallagher, Janet Torma-Krajewski, and Lisa Steiner; Office of Mine Safety and Health Research; NIOSH—received the 2009 Alice Hamilton Award in the Educational Materials category.