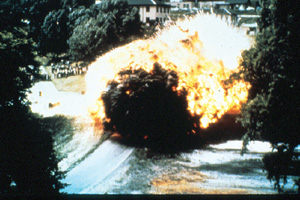 NIOSH is engaged in mine explosion research due to explosions accounting for a vast majority of mining disasters.

Seals, which are used in underground coal mines throughout the U.S. to isolate abandoned mining areas from the active workings, were required to withstand a 140-kPa (20-psig) explosion pressure under mining regulations prior to the Sago Mine disaster in 2006. The failure of seals at Sago prompted sweeping regulatory changes that were initiated with the passage of the Mine Improvement and New Emergency Response Act (MINER act), which required MSHA to increase the seal design standard by the end of 2007. Based on sound scientific and engineering justification, NIOSH researchers developed explosion pressure design criteria for new seal designs and for monitoring the atmosphere behind seals to protect miners from blast effects and toxic gases produced by contained explosions. This information was published in July 2007. In 2008, MSHA issued the final rule for mine seals based, in part, on the information contained in this NIOSH report. The final rule states that seals must withstand 345 kPa (50 psig) if the sealed area atmosphere is monitored and maintained inert, 828 kPa (120 psig) if the sealed area atmosphere is not monitored, and greater than 828 kPa (120 psig) if the sealed area atmosphere is not monitored and certain conditions exist that might lead to higher explosion pressures.

From 2001 to 2007, the NIOSH Office of Mine Safety and Health Research conducted studies to develop alternative ways to determine the adequacy of coal mine seals. The researchers compared full-scale explosion testing within the Lake Lynn Experimental Mine to full-scale hydrostatic testing within a chamber using water to load seals to pressure. Researchers found that gradually applying water pressure to twice the expected explosion pressure was equivalent to the effects created by the rapid increase in pressure loading that results from confined explosions. These hydrostatic tests provided stress-strain measurements, determined the ultimate strength of seals, and demonstrated that hydrostatic testing of mine seals was a timely and cost-effective alternative to full-scale explosion testing. Results of these studies should be used with the testing of mine ventilation seals.

View/Download Entire Document: NIOSH Research Finds that Hydrostatic Testing of Mine Seals can be a Timely and Cost-Effective Alternative to Full-Scale Explosionspdf icon [PDF – 2.39 MB]

Visit www.cdc.gov/niosh for more information on mine safety and health including mine ventilation seals, and download NIOSH Publication 2007-144. Authors of Comparison of Methods: Dynamic versus Hydrostatic Testing of Mine Ventilation Seals—Michael J. Sapko, Samuel P. Harteis, and Eric S. Weiss; Office of Mine Safety and Health Research; NIOSH—received the 2009 Alice Hamilton Award in the Engineering and Physical Sciences category.