Surveillance and Prevention of Occupational Injuries in Alaska: A Decade of Progress, 1990-1999 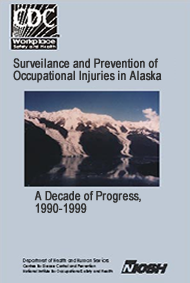 The public health approach of conducting injury surveillance, epidemiologic analysis, planned interventions and evaluation has served as a blueprint for reducing the occupational injury rate in Alaska. Following this approach, the National Institute for Occupational Safety and Health (NIOSH) worked with numerous partners in the public and private sectors on collaborative efforts to prevent occupational injuries and fatalities in Alaska. These efforts included development of a comprehensive, statewide surveillance system that helped identify new and emerging problems, track hazardous conditions over time, target interventions, evaluate efforts and anticipate future problems. During the 1990s, occupational fatalities in Alaska decreased by nearly 50%. This document describes collaborative efforts that contributed to this decrease.

One primary goal in compiling this document was to create a resource that could be used by anyone interested in workplace safety in Alaska or other high-risk areas facing occupational injury challenges. While significant progress was made in the 1990s to reduce fatalities in Alaska’s commercial fishing and helicopter logging industries, challenges remain in reducing the burden of fatal occupational injuries in commercial aviation and nonfatal injuries in construction and commercial fishing.

Surveillance and Prevention of Occupational Injuries in Alaska: A Decade of Progress, 1990-1999pdf icon [PDF – 3.41 MB]