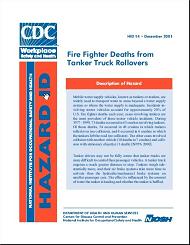 Mobile water supply vehicles, known as tankers or tenders, are widely used to transport water to areas beyond a water supply system or where the water supply is inadequate. Incidents involving motor vehicles account for approximately 20% of U.S. fire fighter deaths each year; cases involving tankers are the most prevalent of these motor vehicle incidents. During 1977–1999, 73 deaths occurred in 63 crashes involving tankers. Of those deaths, 54 occurred in 49 crashes in which tankers rolled over (no collision), and 8 occurred in 6 crashes in which the tankers left the road (no collision). The other cases involved collision with another vehicle (10 deaths in 7 crashes) and collision with stationary object(s) (1 death) [NFPA 2000].

Tanker drivers may not be fully aware that tanker trucks are more difficult to control than passenger vehicles. A tanker truck requires a much greater distance to stop. Tankers weigh substantially more, and their air brake systems take more time to activate than the hydraulic/mechanical brake systems on smaller passenger cars. The effect is influenced by the amount of water the tanker is hauling and whether the tanker is baffled.