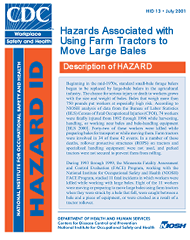 Beginning in the mid-1970s, standard small-bale forage balers began to be replaced by large-bale balers in the agricultural industry. The chance for serious injury or death to workers grows with the size and weight of bales. Bales that weigh more than 750 pounds put workers at especially high risk. According to NIOSH analysis of data from the Bureau of Labor Statistics (BLS) Census of Fatal Occupational Injuries (CFOI), 74 workers were fatally injured from 1992 through 1998 while harvesting, handling, or working near bales and bale-handling equipment [BLS 2000]. Forty-two of these workers were killed while preparing bales for transport or while moving them. Farm tractors were involved in 34 of these 42 events. In a number of these deaths, rollover protective structures (ROPS) on tractors and specialized handling equipment were not used, and parked tractors were not secured to prevent them from rolling.

During 1993 through 1999, the Minnesota Fatality Assessment and Control Evaluation (FACE) Program, working with the National Institute for Occupational Safety and Health (NIOSH) FACE Program, studied 11 fatal incidents in which workers were killed while working with large bales. Eight of the 11 workers were moving or preparing to move large bales using farm tractors when they were struck by a bale that fell, were caught between a bale and a piece of equipment, or were crushed as a result of a tractor rollover.

Workers are at risk of being struck by bales that fall from equipment during transport.

A 70-year-old farmer died from injuries received when a large, round hay bale fell out of the bucket of a tractor-mounted front-end loader. The bale pinned him against the tractor seat. The loader did not have a grapple or spear for holding bales in place. Instead, the farmer had tied the bale with a 5/8-in.-diameter rope. The rope broke, and the bale tumbled down the loader lift arms, striking and killing the farmer [MDH 1995].

Workers are at risk of being caught between a bale and a piece of farm equipment.

A 63-year-old farmer died from injuries received when he was pinned between a large bale and a tractor-mounted front-end loader that had a bale spear attached. The farmer drove the tractor to a spot along a public road where he planned to use chains to pull a large bale from the ditch. He turned the tractor, its wheels still on the road, so that the front faced the ditch. The farmer climbed down from the tractor and walked about 12 to 15 feet to the bale. He had not blocked the wheels or set the emergency brake. As he wrapped chains around the bale, the tractor rolled forward into the ditch, coming to rest against the bale. The bale spear attachment skidded across the top of the bale and wedged the bale between the front of the tractor and the loader. The farmer was caught between the bale and the loader and was unable to free himself. He died as a result of traumatic injury [MDH 1999].

Tractor rollover hazard: Workers risk fatal injury when moving large bales with tractors that are not equipped with ROPS and a seat belt.

A 65-year-old farmer died from injuries received when the tractor he was driving rolled over. He was using a tractor-mounted front-end loader equipped with a large bale spear to haul bales from a field to his farmyard. The tractor did not have ROPS. The farmer had raised the loader about 5 feet above the ground so that the bale he was moving would not block the beams from the hood-mounted headlights. As the farmer drove the tractor from the field to the farmyard, the left rear tractor wheel left the driveway surface and entered a ditch. The tractor rolled over to the side 180 degrees, coming to rest on top of the farmer and causing fatal crushing injuries [MDH 1996].

To reduce the risk of injuries and deaths, farmers and their employees should take the following measures: 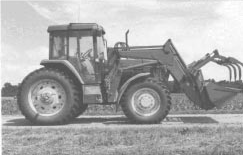 Photo 1. The tractor shown above has a front-end loader equipped with an attachment for securing bales (grapple). The loader is shown in a lowered position, which is the safest position to use when moving bales.

The principal contributors to this publication were Doloris Higgins, Division of Safety Research, NIOSH, and David L. Parker and George Wahl, Minnesota Department of Health.

NIOSH and MN FACE recommend that farmers, farm machinery owners, and agricultural workers consult equipment manufacturers to obtain information regarding ROPS and the safe use of farm equipment attachments. Additional information can be obtained from the NIOSH FACE program, the MN FACE program, your Occupational Safety and Health Administration (OSHA) office, and from your local county agricultural extension agent.