Brian Moyer, Ph.D., M.A., has been named the director of the Centers for Disease Control and Prevention’s (CDC) National Center for Health Statistics (NCHS) effective March 30, 2020. Dr. Moyer has been serving as Director of the Bureau of Economic Analysis (BEA) since September 2014 and as Acting Under Secretary for Economic Affairs, which oversees BEA, for the U.S. Department of Commerce since December 2018. 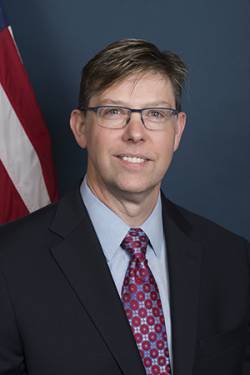 As the director of NCHS, Dr. Moyer will provide national leadership for the nation’s principal health statistics agency. NCHS is responsible for the design and implementation of statistical and information systems that guide actions and policies to improve the health of the American people.

Dr. Moyer has served in several positions in his nearly three decades at the BEA. He is the author of numerous articles on measuring the performance of the U.S. economy. Much of his research has focused on improving industry-related statistics, including expanded use of “big data” and associated platforms. His leadership of collaborative scientific research has made full use of new methodologies and data sources to develop statistical products, including machine learning algorithms, artificial intelligence, administrative data, and private industry data sources. He has worked alongside the academic community to continuously improve statistical concepts and techniques.

In his role as the Commerce Department’s head statistical official, Dr. Moyer has been instrumental in implementation of the Foundations for Evidence Based Policymaking Act of 2018. He also represented the interests of the Department through numerous engagements with Congress, the United Nations, and other high-level organizations.

Dr. Moyer received a bachelor’s and master’s degrees in economics from the University of Maryland. He holds a PhD in economics from American University and is a recipient of numerous awards for his management and leadership skills, as well as for improvements to BEA’s economic accounts.