From World War I to 1968, the United States produced chemical weapons as a deterrent against use of similar weapons by other countries. Though never used in battle, these U.S. weapons are now obsolete and deteriorating with age. The U.S. national stockpile of lethal chemical warfare agents primarily involves six chemicals: During Operation Cut Holes and Sink ‘Em (CHASE) from 1967 to 1970, thousands of tons of unwanted chemical warfare agents and ammunition were disposed of by loading them onto old ships that then were intentionally sunk at sea.

In 1970, Congress passed PL 91-121/441 (50 USC 1521). This law directed what is now the Department of Health and Human Services (HHS) and the Office of the Surgeon General (OSG) to review plans made by the Department of Defense (DoD) to transport, test or dispose of lethal chemical agents, and to recommend actions to protect the public’s health and safety during such activities.

Congress passed Public Law (PL) 92-532 (33 USC 1401) in 1972 because of environmental concern about dumping chemical weapons in the sea. Known as the Marine Protection, Research, and Sanctuaries Act of 1972, this law prohibits the kind of dumping done during Operation CHASE.

HHS and OSG assigned responsibility for reviewing DoD plans to transport, test, or dispose of lethal chemical agents to the National Center for Environmental Health (NCEH) at the Centers for Disease Control and Prevention (CDC). Since 1983, NCEH’s Environmental Public Health Readiness Branch has reviewed plans of DoD’s chemical weapons demilitarization program. After these reviews, NCEH recommends actions to ensure protection of public health and safety when chemical warfare agents are destroyed.

In 1986 as part of PL 99-145 (50 USC 1521), Congress required that all stockpiles of U.S. chemical warfare agents be destroyed. U.S. stockpiles totaled approximately 30,500 tons, according to the 1997 Organisation for the Prohibition of Chemical Weapons (OPCW) inventory. Nonstockpile chemical warfare items, such as recovered chemical weapons and chemical agent identification sets, were estimated to exist at more than 200 sites in the United States and its territories.

In 1997, the United States ratified the United Nations International Chemical Weapons Convention treaty. By participating in the treaty, the United States agreed to destroy its stockpile of aging chemical weapons—principally mustard agent and nerve agents—by April 29, 2007. However, the final destruction deadline was extended to April 29, 2012, at the Eleventh Session of the Conference of the States Parties to the Chemical Weapons Convention at The Hague on December 8, 2006.

DoD stored chemical warfare agents, either in bulk containers or as assembled munitions, at eight locations in the continental United States. The remainder of the stockpile was transferred to Johnston Atoll, a small remote island in the Pacific Ocean (southwest of the Hawaiian Islands).

All chemical warfare agents have been destroyed at six sites, and those sites are closed:

Destruction facilities are under construction at the two remaining sites. 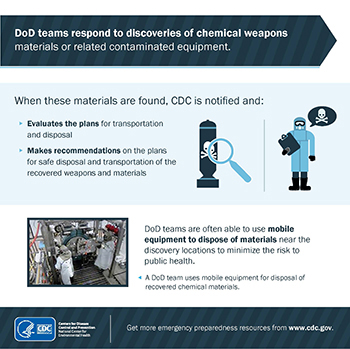 Click above for an overview of chemical weapons recovery.

When items suspected as recovered chemical warfare are found, they are examined by a series of nondestructive tests. If they contain chemical warfare agents, they are destroyed and disposed near the area where they are found. This is conducted using mobile equipment designed for that purpose. CDC reviews plans and methods to verify public health is protected. At Spring Valley, the Project Manager for Non-Stockpile Chemical Materiel used a portable explosive destruction system to destroy WWI-era chemical munitions.