“When you lose your child, it’s real. It’s been 5 years for me. People will tell you time will heal, but it doesn’t really heal. You just learn how to cope,” said Ritchie Johnson on the loss of her son, Chris, to a rare kidney cancer linked to sickle cell trait (SCT).

Chris was born with SCT, a genetic condition that occurs when a child inherits one sickle cell gene and one normal gene from the parents. When two sickle cell genes are inherited, the child is born with sickle cell disease (SCD), which can cause pain, acute chest syndrome, stroke, and other serious health problems. SCT is often seen as a less dangerous condition compared to SCD because people with SCT often do not experience the painful and life-threatening symptoms of SCD.

After a newborn screening revealed Chris had SCT, the hospital provided little information on the condition. “I was told that SCT was nothing to worry about and that you could live a long, normal, and healthy life without any problems,” said Ritchie.

Chris had an active childhood and played sports. He earned a football scholarship from the University of New Mexico. SCT never limited his lifestyle. 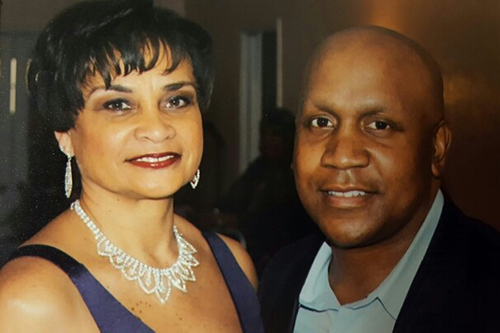 At the age of 38, Chris saw blood in his urine. At the emergency room, a CT scan found a tumor in his right kidney. Chris was diagnosed with an extremely rare form of kidney cancer known as renal medullary carcinoma (RMC). Common symptoms of kidney cancer include pain in the lower back, blood in the urine, and weight loss.

RMC has been linked to SCT. RMC is aggressive and typically leads to death. It’s especially difficult to treat because of limited awareness and research on the disease. There is no medicine available for RMC. At the time of Chris’ diagnosis in 2011, there were no clinical trials (research studies that explore whether a medical strategy, treatment, or device is safe and effective for humans).

Chris and Ritchie were shocked. Before the diagnosis, Chris had lower back pain that continued for several years. He visited a primary care physician, a chiropractor (a doctor who specializes in diagnosing and treating disorders of the musculoskeletal and nervous system, especially in the spine), and even received physical therapy for the pain, but it never went away. Chris thought the pain was a football-related injury received in college or from a previous car crash. He never expected the pain to be a symptom of a kidney cancer linked to SCT. Even his healthcare providers never considered his pain to be linked to SCT or kidney cancer.

By the time Chris was diagnosed, the cancer was stage 4. Chris needed medical treatment immediately.

At the hospital, Chris was treated with chemotherapy and additional cancer treatments often used to treat other types of kidney cancer. Treatment was expensive, and at one point, hospital bills reached more than half a million dollars. Chris fought the cancer for one year until his body became de-sensitized to the treatments and rejected chemotherapy. “The cancer went through his body like wildfire,” said Ritchie. Chris passed away 3 months later in the fall of 2012.

In honor of Chris, Ritchie founded the Chris “CJ” Johnson Foundation in 2013. While Chris received treatment, he understood the need for awareness and information on kidney cancers, especially RMC and its link to SCT. The Foundation raises awareness and donates funds to advance RMC research, and it provides education and support to families battling RMC. Some progress has been made, including two clinical trials on RMC that help to better understand the condition. However, more awareness is needed.

“We’re working with pediatricians in the Houston area to have them look out for certain symptoms when a child is diagnosed with SCT. We’re not trying to scare anyone, but we want people to be aware of any possible symptoms that might be associated with RMC. Awareness is extremely important. We need to get the word out about RMC, and not just in the United States, because we have patients all over. We need to get this information out globally so that we can make a difference, and one day, hopefully, find a cure for RMC,” said Ritchie.

Although the pain of losing a child never goes away, Ritchie finds peace by helping others understand and cope with a devastating diagnosis. “The main thing is staying positive and not giving up. Even though my son was 39 years old when he passed, it’s still scary. People can reach out to us (the Foundation) for emotional support or whatever they need. They need someone to talk to during this time. Think positively and don’t give up. Stand strong and fight it,” said Ritchie.

Find more information and resources on SCD and SCT here.

CDC would like to thank Ritchie Johnson for sharing her story.