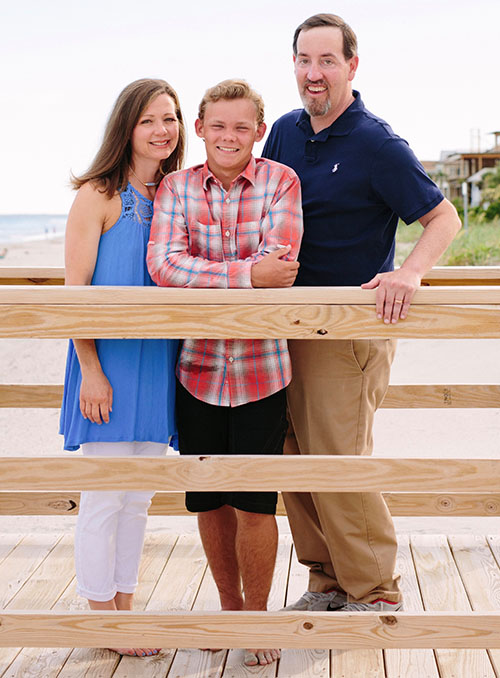 The diagnosis explained many of the seemingly unconnected symptoms that each had been dealing with for years. “I probably had some symptoms starting around 18, like hand cramping. Back then I used to just sort of stretch my hands out and go, and not think much about it. I was very active.” says Paul. He started having heart trouble around age 26, but nothing showed up on the tests until one night when he ended up in the emergency room with an extremely high heart rate. “During one of the tests, my heart stopped, and they brought me back. The doctor didn’t know what was causing it, but they decided to put in a defibrillator.” Six years later, at the age of 32, Paul received his myotonic dystrophy diagnosis.

Myotonic dystrophy affects many parts of the body, so both Paul and Carly need to see many different types of doctors on a regular basis. Even though Paul and Carly are both adults, their fathers often come to their appointments with them and help them coordinate their care. “You have to have someone who knows everything and has been to every appointment,” says Chuck, Carly’s father. For patients with rare diseases, caregivers often become experts in the disease.

Even though Paul and Carly have the same disease, their symptoms are very different. At age 30, Carly has difficulty with her speech, excessive sleepiness, dyslexia, and is beginning to have heart complications. “I can sleep 20 hours straight and still wake up tired” she says.

At age 45, Paul has a pacemaker, sometimes needs a ventilator, and has lost even more strength in his muscles. Everyday things are very difficult for him. “He can’t do the pots and pans, he can’t put casseroles in the oven, he can’t get things off the shelf, he can’t pour milk; those kinds of things are almost impossible. I don’t think people really understand,” says Angie, Paul’s wife and primary caregiver. Paul and Angie have a teenage son who does a lot of the heavy lifting around the house that Paul is unable to do. Paul has trouble getting dressed and putting on socks, and says that his son Alex is a big help. “If I fall, which can be embarrassing, he physically lifts me up.”

Paul and Carly agree that it is difficult for others to understand what it means to have myotonic dystrophy. They often get asked if they are getting better, or people tell them that they don’t look like they have muscular dystrophy. Paul says, “I tell them I have a neuromuscular disease that affects me every second of every day; it’s just that nobody knows what it’s like. They don’t know what to do or how to help.” Help is often hard to come by, especially for the caregivers. Angie and Paul know that soon they will have to hire someone to help Paul during the day while Angie is at work. “When people have cancer or other diseases, people bring food and help. But ours is chronic and progressive, and people don’t even know what to do.” Another challenge with myotonic dystrophy is that when one person gets diagnosed, other family members may also find they have the same disease, possibly resulting in more people in the family needing care and fewer people to provide it.

When you’re living with a disability like myotonic dystrophy, planning is everything. When Paul is invited to events, he often has to call ahead and determine whether he can go. “Everywhere I go, everything I do, I think ‘Is this something I can do? Is there an accessible bathroom? Is there an elevator? Are there stairs I have to climb? Can I do this? Two years ago, when I went to the football championship, I had to call the stadium and talk with someone about whether I could manage it based on where the seats were.” 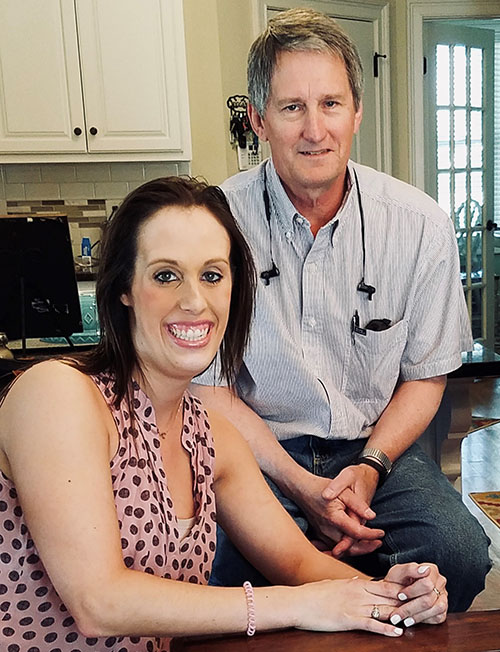 While Paul is no longer able to work, Carly works full time at a bakery where she’s on her feet and lifting things for 8 hours a day. She’s exhausted when she leaves, but she’s grateful for the opportunity to have work that comes with health insurance and other benefits. “I definitely think that my work keeps me going. If I was sitting around all day, it wouldn’t keep me as fit as I am,” says Carly. Paul notes, “Carly is a lot stronger and able. She is much younger. At her age, I was probably very similar.”

Carly knows that things may change for her in the future. “I think I go back and forth between denial and acceptance. It affects everyone differently, so I may never have the same kind of issues. So it is scary, but it isn’t, because nobody can tell me what it will look like.”

Carly enjoys the abilities that she still has, and does things like zip-lining with her Dad. Paul stays busy parenting his 16-year-old son, who will soon be headed off to college. Life with myotonic dystrophy requires careful planning and compromise, but is not without joy. “We had to re-evaluate our life and find a new normal,” says Angie.

The Myotonic Dystrophy Foundation recently published clinical guidelines for people living with myotonic dystrophy, which may help people like Carly and Paul with their medical needs.

Leading an active life with muscular dystrophy has its challenges, but Kevin takes them all in stride. There was the frustration this former distance swimmer and three-time Junior Olympian felt when he couldn’t swim 25 yards. And the time he was headed to a black tie dinner only to cancel his plans when he learned that one of the two wheelchair cabs in town was broken. “That was a real ah-ha moment. I don’t want to be in that position again…the position of not being able to do something because of my limited mobility.” 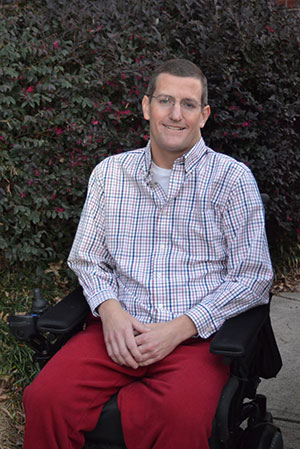 Kevin was living in Washington, DC when he was diagnosed with FSHD. As the muscle inflammation, wasting, and loss of balance got worse, his doctor suggested he move someplace warmer that had FSHD specialists. Kevin chose Atlanta. “I took a big pay cut. I was looking for a less stressful job with really good insurance. My new company offered long term disability insurance from day one. I was thinking long term without making it sound like I was thinking long term.”

“Stairs were tough, but I could do them. Then I decided to use the cane, and then the crutch. I had six trips to the ER during the first two and a half months of the year, all from falls. My doctor said next time it would be a broken hip, and I’d be in the hospital for months. That’s when I got the wheelchair. Now I can do so much more.”

Earlier this year Kevin decided to go on disability. Volunteer work keeps him busy, and his physical and mental health has improved. He works with the Humane Society and helps lead a fundraiser supporting AIDS vaccine development. He’s registering to be a citizen lobbyist during the next Georgia legislative session. Kevin also has an idea to help others with FSHD. “We need something to help people when they’re first diagnosed. New patients ask the same questions. It’s overwhelming to learn you have a disease you can’t even pronounce. Social media is helping connect patients and break down the isolation faced by many with FSHD.”

As Kevin enters his second decade living with muscular dystrophy, he laughs that he turned 40 and got a minivan in the same month. “I don’t think that’s how your midlife crisis is supposed to go.” When asked if he thinks about the next ten years, he says “I can’t go there. I can’t stress about the things I can’t control. Today my life is great.”

CDC would like to thank Kevin for sharing this personal story. 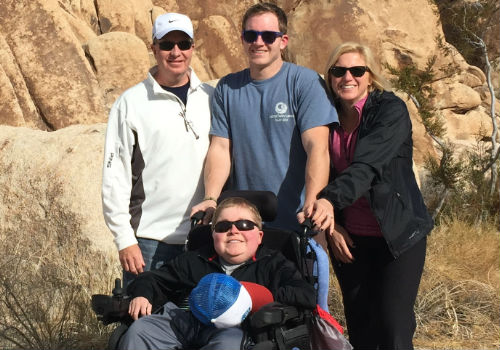 Conor actively advocates for people with disabilities. He pointed out to the staff at his college that the newly built walkway from disability services to another campus building had stairs at one end, and then he worked with disability services to get a ramp built. Conor also scored the winning goal in the national championship game of the United States Power Soccer Association. Conor has Duchenne muscular dystrophy. Having Duchenne means his muscles, including his heart and muscles that control breathing, will get weaker and weaker. Learning about Conor’s life is an important part of understanding what can be done by and for people with Duchenne.

Conor focuses on his living situation and plans after college. He says he might like to “live somewhere closer to the city, but not anywhere too expensive, and maybe have a few roommates with Duchenne or other disabilities. I’d like to have more information on places to live on my own.” Conor’s mom adds, “When Conor was diagnosed at age 4, the Internet was new, and things written about Duchenne were very discouraging. Now medicine is advancing and there are clinical trials for new treatments. That’s why we need information on college and independent living.”

Living independently is one part of transitioning to adulthood. Managing medical care is another. Individuals with Duchenne see many different specialists. Conor’s mom calls herself the care coordinator. She shares, “There’s a nurse coordinator at the Muscular Dystrophy Association clinic in the children’s hospital, but once you age out of the children’s hospital, it’s a problem. If Conor gets to the emergency room for some reason, the first doctor I would call is the pulmonologist (a lung disease specialist). I feel like that’s number one.” For people living with Duchenne, care coordination often becomes the responsibility of the primary caregiver. Conor’s mom says she’s the one who usually tells the other doctors about Conor’s medicines, treatments, and other care management details.

Conor’s mom says it can also be tough finding care for Conor. A few years ago, Conor needed cataract surgery. Ophthalmologists (eye specialists) typically do cataract surgery at outpatient surgery centers, but Conor needed to be at a hospital. “It took us a year and a half until I found a doctor who would do it.” She stresses the importance of care coordination, which gets more difficult as men like Conor begin managing their own care and transition to doctors who care for adults.

“I decided that eventually I have to manage my medical care, so I should try to understand it better, emailing and setting up appointments,” says Conor. He says people should “teach kids how to manage their medical expenses and their living situations after college, and maybe also talk about how you don’t always have to be stuck at home. You can be outgoing and do a lot of stuff. And you can make a difference if you really try.”

Conor and Kasey, his personal assistant and best friend, are busy making plans. They go to the movies on Fridays and enjoy playing video games. Last summer they attended a three-day outdoor music festival with 40,000 fellow fans. Both men will tell you they enjoy getting to know bands before they make it big.

Note: Conor passed in 2018. CDC would like to thank his family for allowing us to continue sharing his story.

Physical Developmental Delays: What to look for