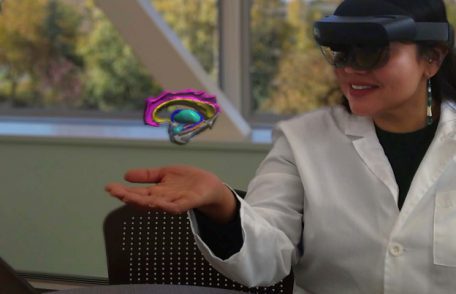 Above: Users of the Alaska Native Tribal Health Consortium’s new augmented reality app can interact with holograms to learn how brain structures are affected by trauma and substance use. A shared-experience function allows clinicians, counselors, and community health aides to guide users through the content. 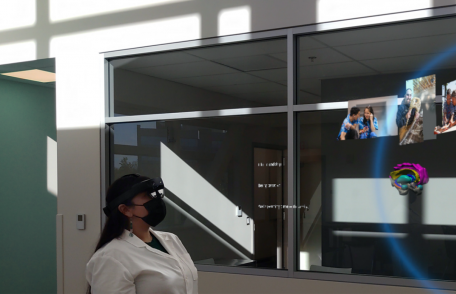 Above: In this informational module in augmented reality, a user wearing special glasses interacts with a holographic limbic system to learn how the brain can reinforce healthy behaviors. The plain-language experience developed by the Alaska Native Tribal Health Consortium aims to reduce the social stigma of behavioral health treatment and help patients make more informed decisions about their care. 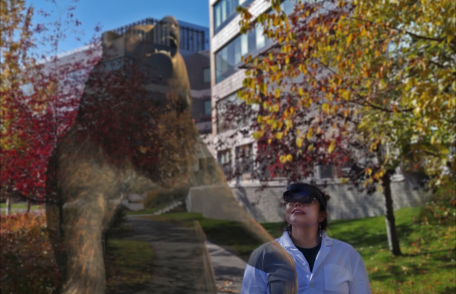 Above: A portable wifi hotspot makes it possible to take the Alaska Native Tribal Health Consortium’s shared user experience in augmented reality almost anywhere. In this image, a user takes a holographic bear, part of a brain health mini-lesson, for a walk across the Anchorage health campus. 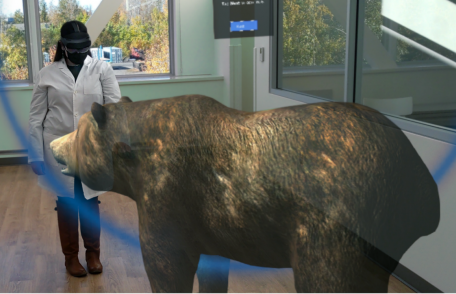 Above: Mixed reality programmers at the Alaska Native Tribal Health Consortium created this holographic bear to show patients how the brain makes decisions under stress. Users can interact with the 3D model to learn how substances can affect thinking and decision making. Above: The Alaska Native Tribal Health Consortium developed the “Opioids and the Brain” augmented reality app to help make information about brain health more accessible to everyone. Users wearing special glasses can interact with medical models to see how substances and trauma can affect their health. 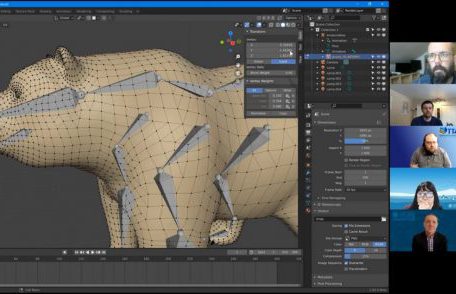 The Alaska Native Tribal Health Consortium (ANTHC) is the largest, most comprehensive tribal health organization in the United States. The organization puts creativity and innovation at the forefront of its programming to serve over 160,000 Alaska Native and American Indian people across a vast geographic area.

In 2017, Alaska’s governor declared the opioid crisis a statewide disaster. This prompted coordinated and collaborative action among many state, tribal, and federal agencies. Alaska’s Statewide Opioid Action Plan was finalized in 2018 and outlined priorities for addressing stigma, educating communities, and reducing the risk of substance misuse.

Behavioral health program staff and epidemiologists at ANTHC joined forces to put the strategic plan into action. Staff conducted community health assessments and identified stigma towards individuals with a substance use disorder and a lack of engaging education about opioids’ effects on the brain as the top priorities in communities. Attention turned to technologies that could provide a realistic, interactive learning experience that would be different from any other education currently being offered by the state. ANTHC’s Telehealth Technology Assessment Center, a leader in telehealth technology, made pilot testing with their augmented reality glasses readily accessible.

ANTHC staff facilitated a collaborative storyboarding process, which involved content review by physicians. They ultimately developed what might be the most creative of their educational approaches to-date: an augmented reality learning experience that incorporates culturally appropriate images and references with straightforward explanations of neurophysiology. When patients put on a pair of mixed reality glasses, they are transported to a campfire, complete with the sound of crackling firewood. Information is presented like a story. Users can select different chapters ranging from the epidemiology of opioid use in Alaska, to different brain functions, to the effects of opioids on the brain. 3D images provide immersive, sensory experiences throughout each chapter of this new curriculum. For example, the image of a towering bear shows patients how the brain makes decisions under stress. ANTHC staff also worked with local language experts during the summer of 2021 to translate materials into the Yup’ik language, which will make the education even more accessible to patients.

This technology has checked off all boxes for ANTHC staff. It filled the program gaps identified at the initial assessment phase of this project and has also been a surprisingly cost effective and practical option. The lenses are cheaper and much more transportable compared to ANTHC’s other educational offerings like giant anatomical inflatables, which are expensive and pose significant logistical challenges. The project has garnered positive feedback in its current pilot stage and proven immense potential for future use. Providers who were involved in testing stated that they “would use this with patients in a heartbeat” and that the presentation of material was “the best explanation [they’ve] ever seen.”

Enthusiasm for this form of education has also led to conversations about expanding content beyond opioid use to topics such as other types of substance use and adverse childhood experiences. ANTHC staff hope to expand to different platforms as the technology improves, such as smartphones or webpages, to make the educational experience accessible to the entire tribal health patient population and ultimately improve substance use literacy across the Alaska health system. Simply put by Program Manager Jackie Engebretson, “It’s great to have the opportunity for Indian Country to have something so cutting edge.”

Acknowledgements: Special thanks to Tim Collins and Jackie Engebretson for their contributions to this story.