The African Network for Influenza Surveillance and Epidemiology (ANISE)

The African Network for Influenza Surveillance and Epidemiology (ANISE) is a network of laboratorians, epidemiologists, public health officials, clinicians, veterinarians, researchers and policy-makers who work together to strengthen the capacity for surveillance and research related to influenza and other respiratory viruses in Africa. ANISE was founded in 2009 and currently has more than 260 members from more than 30 countries working on improving detection, case management, control and prevention of influenza and other respiratory viruses in Africa.

ANISE has promoted the use of standardized protocols for surveillance of respiratory illnesses with the vision to estimate influenza-associated disease and economic burden in the continent, generating evidence-based data to support public health interventions and relevant changes in policy. Collaboration among participating countries has led to important research studies such as Severe acute respiratory illness deaths in Sub‐Saharan Africa and the role of influenza: a case‐series from 8 countries and a supplement published in the Journal of Infectious Diseases in 2012 which focused on influenza in Africa and included more than 25 articles with original data from Africa. Another important activity for the network is to facilitate capacity building in epidemiology, laboratory and surveillance. This has been achieved through one-to-one exchanges between members of various participating countries and also through convening workshops on topics such as data management, scientific writing, molecular diagnostic methods and disease burden estimation.

Members can use the Network to coordinate with one another and provide laboratory and epidemiologic support to other members.

The objectives of the ANISE Network are to:

The Network is open to professionals working on influenza-related projects or research in Africa.

Send an email to ANISE@cdc.gov to receive emails from the ANISE listserv.

This meeting is open to laboratorians, epidemiologists, public health officials, clinicians, veterinarians, researchers, policy-makers and students who have particular interest in influenza and other respiratory viruses.

The meeting will include keynote presentations by international experts and abstract-driven oral and poster presentations. 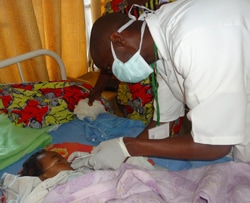 An influenza surveillance nurse collects a sample from a child with acute respiratory illness at a local hospital in Rwanda.

The first ANISE Meeting took place in South Africa in December 2009. The meeting was co-hosted by CDC and South Africa’s National Institute for Communicable Disease. It was originally scheduled for May 2009, but postponed due to the 2009 influenza A (H1N1) pandemic. The meeting showcased efforts to start and/or improve influenza surveillance in Africa. The first ANISE meeting brought together approximately 110 attendees from 20 countries.

In January 2011, ANISE had its second meeting in Ghana. The meeting was co-hosted by CDC, the Noguchi Memorial Institute for Medical Research, and Naval Medical Research Unit No. 3. It brought together approximately 100 members from 23 African countries, along with representatives from Ghana Health Services, World Health Organization (WHO), Agence de Médecine Préventive, and Institut Pasteur. Attendees discussed influenza surveillance and research projects conducted over the past two years. Highlights of the meeting included brief presentations given by each country showcasing their surveillance achievements and epidemiologic and laboratory data.

In February 2012, CDC’s Influenza Division and the Kenya Ministry of Public Health and Sanitation hosted the 3rd ANISE meeting in Kenya. The meeting brought together 170 participants representing 30 countries, including 24 African countries. Additionally, members from organizations such as the WHO, Institut Pasteur, and the U.S. Army Medical Research Unit in Kenya attended and provided updates.

The 5th African Network for Influenza Surveillance and Epidemiology (ANISE) Meeting was held in Kigali, Rwanda on March 9-11, 2016. The ANISE Meeting brought together more than 100 participants from over 20 African countries, international public health organizations, and academic institutions working on influenza in Africa.

Influenza infection is a major cause of morbidity and mortality worldwide. At particular risk of severe disease are young children, pregnant women, the elderly, and persons with underlying medical conditions. The burden and epidemiology of influenza have been studied almost exclusively in developed settings, but influenza may have a different epidemiology in lesser resourced settings such as Africa due to untreated co-morbidities, malnutrition and other factors. Vaccination is the best way to prevent influenza illness but, due to cost, most vulnerable populations in low-income countries do not have access to influenza vaccines.