The cost of excessive alcohol use in the U.S. rose to almost a quarter trillion dollars in 2010. Implementing effective community-based interventions can reduce excessive drinking and its costs.

Excessive alcohol use is known to kill about 88,000 people in the United States each year, but a CDC studyexternal icon suggests it is also a drain on the American economy, mostly due to losses in workplace productivity.

Total costs
The cost of excessive alcohol use in the United States reached $249 billion in 2010, or about $2.05 per drink. Most (77%) of these costs were due to binge drinking. Binge drinking is defined as drinking four or more alcoholic beverages per occasion for women or five or more drinks per occasion for men. Further, 2 of every 5 dollars were paid by federal, state, and local governments, demonstrating that we are all paying for excessive alcohol use.

Cost Breakout
The researchers found that the cost of this dangerous behavior impacts many aspects of the drinker’s life and the lives of those around them. However, most of the costs resulted from losses in workplace productivity (72% of the total cost), health care expenses for treating problems caused by excessive drinking (11% of total), law enforcement and other criminal justice expenses (10%), and losses from motor vehicle crashes related to excessive alcohol use (5%).

These estimates update two previous CDC studies that found excessive drinking cost the U.S. $223.5 billion and cost states and D.C. a median of $2.9 billion in 2006. The researchers believe that the study still underestimates the cost of excessive drinking because information on alcohol is often underreported or unavailable, and the study did not include other costs, such as pain and suffering due to alcohol-related injuries and diseases.

How can we prevent excessive alcohol consumption and reduce its economic costs?

Communities can use effective interventions to prevent excessive drinking and related harms and costs. These include: 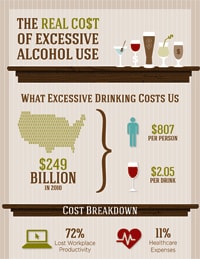 The Real Cost of Excessive Alcohol Use pdf icon[3.46 MB]