TATFAR partners are collaborating to support the 2017 World Antibiotic Awareness Week! This annual one-week observance, set for Nov. 13 – Nov. 19, raises awareness of antimicrobial resistance (AMR) and the importance of appropriate antibiotic prescribing and use. The observance is a key component of TATFAR efforts to improve antibiotic stewardship. Take a look below for highlights from TATFAR members Canada, European Union (EU), and the United States, and check out their websites for more information.

You can also participate by joining the Global Twitter Conversation. Starting Nov. 16, TATFAR partners such as Australia, Canada, Japan, New Zealand, and the United States will use #AntibioticResistance to share resources, answer questions, and participate in a global discussion on antibiotic use and AMR.

The Public Health Agency of Canada (PHAC) leads Canada’s international and domestic response on AMR. PHAC brings together other federal departments, provinces, and territories, plus all sectors, to align efforts and identify collaborative opportunities to address AMR.

PHAC will release the 2017 Canadian Antimicrobial Resistance Surveillance System report with a webinar scheduled for Nov. 16

The Government of Canada has several resources, available in English and French languages, to promote antibiotic resistance awareness. Canadian stakeholders are pledging to use antibiotics wisely and any Canadian resident can share their own pledge to fight antibiotic resistance. The Antimicrobial Stewardship and Resistance Committee within the Association of Medical Microbiology and Infectious Disease Canada developed a Business Case document for Antimicrobial Stewardship Programs to help healthcare leaders get necessary resources to launch or improve their own antimicrobial stewardship programs.

The Canadian Institutes of Health Research (CIHR) will be post a variety of messages to social media during World Antibiotics Awareness week, including infographics and information from partners and stakeholders. CIHR posted a message online from Dr. Marc Ouellette, Scientific Director of CIHR Institute of Infection and Immunity and world-renowned AMR researcher, and Dr. Steven Hoffman, Scientific Director of CIHR Institute of Population and Public Health and the AMR initiative co-lead. 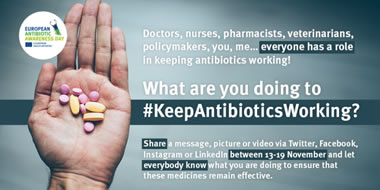 For WAAW 2017, the European Centre for Disease Prevention and Control (ECDC), in cooperation with the European Commission, will host an EU-level event titled “Keeping Antibiotics Working.” The event, moderated by journalist Jason Gale, will open with a keynote speech by EU Commissioner for Health and Food Safety Vytenis Andriukaitis and will feature contributions by:

ECDC is also launching an online social media campaign using the #KeepAntibioticsWorking. Everyone is encouraged to share a message, picture, or video on their social media channels using the #KeepAntibioticsWorking hashtag during WAAW. For example, share what you can do in your professional or personal life, or at collective level, to use antibiotics responsibly and keep antibiotics working.

In addition to the event and campaign, ECDC is launching a new EAAD website and published a new communications toolkit aimed at healthcare professionals working in hospitals and long-term care facilities. A set of key messages for different groups is translated into all EU languages, plus a new page with patient stories, including three developed by ECDC.

Lastly, on 15 November, ECDC will release the latest data on AMR in the EU, reported to the European Antimicrobial Resistance Surveillance Network (EARS-Net). 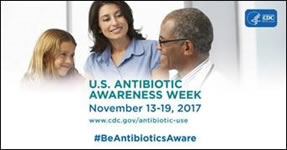 The week’s events include: