In the last few years, there has been increasing recognition that new economic models are needed to spur antibacterial drug development. Because antibiotic resistance occurs as a part of a natural evolution process, it can be significantly slowed but not stopped. Therefore, new antibiotics, alongside prevention strategies, will always be needed to keep up with resistant bacteria. 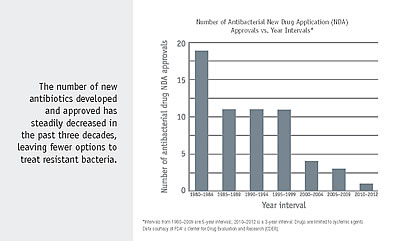 “Push incentives” that lower the cost of drug research and development are widely used by governments to support new antibacterial discovery. “Pull incentives,” which provide a known return on investment and reward successful development, are increasingly viewed as viable mechanisms to engage industry to develop new antibacterial drugs.

Examples of Push and Pull Incentives

In October 2015, the TATFAR examined the different economic incentives that could be applied to spur innovation in antibacterial drug development. With the goal of making recommendations for strategies to improve the pipeline of antibiotics, TATFAR conducted a literature review of peer-reviewed publications and government commissioned reports to ascertain where consensus existed globally. In 2016, TATFAR published its first paper on incentives (Sciarretta et al., 2016, Clinical Infectious Diseases [PDF – 5 pages]), which showed unanimous consensus in the literature of a greater need for both push and pull economic incentives. Further, there was unanimous consensus that business models should be adopted to uncouple or delink the profit of an antibiotic from the volume sold. Lastly, the paper underlined the importance of global coordination on economic incentives.

In June of 2017, TATFAR published its second incentives paper (Ardal et al., 2017, Clinical Infectious Diseases), which examined various pull incentives that have been described to potentially incentivize antibacterial drug development. At present, there are few pull incentives implemented. Many experts argue that this is the remaining piece that requires action to create an ecosystem of incentives to mobilize industry to re-enter antibacterial drug discovery and development. TATFAR examined six primary incentives in the second paper:

Of these incentives, it was determined that market entry rewards-market priced possessed the least secondary disruptive effects—that is, the market consequences were relatively low and would have less impact on patient access—and was moderately sustainable. The paper also describes the pros and cons of the other incentives.

In the next several months, TATFAR will examine the work products of other groups that have been examining this topic. TATFAR aims to publish its third and final paper on this topic to provide a final recommendation on a set of economic incentives that should be considered for implementation.

TATFAR was established to increase the mutual understandings of U.S. and EU activities and programs related to antibiotic resistance, deepen the transatlantic dialogue, and promote information exchange on three key areas: preventing drug-resistant infections, appropriate antibiotic use in human and animals, and strategies to improve drug development.