On This Page
Acronyms

TATFAR partners also lead domestic campaigns to promote appropriate antibiotic use and highlights from these campaigns are below.

ECDC, in coordination with the European Commission, will host an EU-level launch event entitled “European Antibiotic Awareness Day: the future is now.” The planned interventions will not only present the current situation and future steps at EU level, but will also aim at highlighting how resistance to antibiotics is affecting our lives today and what can be done by different sectors to ensure that they remain effective. It will take place on 18 November 2016, from 9:30 to 13:00 CET. ECDC and partner organisations will be live tweeting from the event using #EAAD2016. Speakers such as Dr Vytenis Andriukaitis (EU Commissioner for Health and Food Safety), Mr Martin Seychell (Deputy Director-General for Health and Food Safety), Dr Ruxandra Draghia-Akli (Deputy Director-General for Research and Innovation), Dr Danilo Lo Fo Wong (Programme Manager, control of antimicrobial resistance, World Health Organization Regional for Europe) will take part, together with representatives from the European Medicines Agency, the European Food Safety Authority, and ECDC.

TATFAR partners also lead domestic campaigns to promote appropriate antibiotic use and highlights from these campaigns are below.

Following the success of last year’s 24-hour conversation on antibiotic resistance and prudent use of antibiotics around the world, ECDC is also coordinating the Global Twitter conversation on 18 November 2016, hosted jointly by participating organisations from Australia, Canada, New Zealand, the United States, and WHO Headquarters and its regional offices. The hashtags that will be used are #AntibioticResistance and #EAAD. Furthermore, on 18 November, ECDC will publish the latest data on antibiotic resistance and consumption in humans in the EU, together with a policy briefing and a press release. These documents highlight that last-line antibiotics are failing, but that we are still on time to turn the tide.

Finally, EAAD received the European Health Award, a prize awarded each year by the European Health Forum Gastein. This award honours initiatives aiming to improve public health or healthcare in Europe. It was established in 2007 to promote cross-border cooperation, multi-country working, and the development of sustainable, innovative and transferable initiatives which address current challenges such as disparities in health status, access to services and the provision of treatment within Europe. This year, six cross-border health projects were short-listed for the European Health Award. The prize winner was chosen by an independent panel of leading health experts. This will be highlighted during our activities this year.

CDC hosts an annual one-week observance to raise awareness of antibiotic resistance and the importance of appropriate antibiotic prescribing and use. During this week, CDC focuses the attention of professional societies, advocacy groups, for-profit companies, state and local health departments, the general public, the media, and others around antibiotic stewardship in the outpatient, inpatient, and animal health settings.

CDC will also participate in the Global Twitter Chat on Friday, November 18 and host from 11 AM to 1 PM EST.

Antibiotic resistance is a growing global threat to human health. Preventing the spread of resistant disease and protecting our antibiotic resources is a CDC priority. CDC has identified four Core Elements of Outpatient Antibiotic Stewardship and will release this during the antibiotic awareness week. We encourage you to participate in our webinar on the Core Elements of Outpatient Antibiotic Stewardship on Tuesday, November 15 at 1 PM EST. 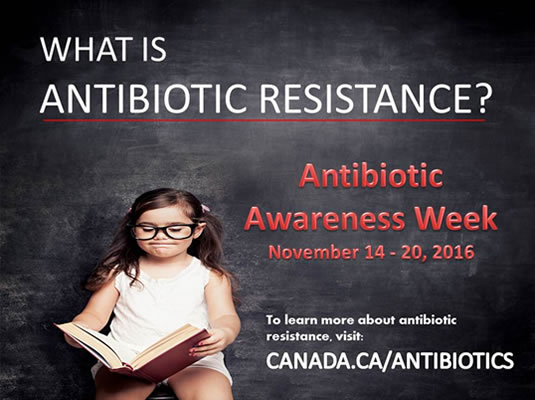 PHAC leads Canada’s international and domestic response on antimicrobial resistance (AMR). PHAC brings together other federal departments, provinces and territories and all sectors to align efforts and identify collaborative opportunities to address AMR.