On October 22-23, 2015 nearly 80 international experts in antimicrobial resistance convened in Luxembourg for a meeting of the Transatlantic Taskforce on Antimicrobial Resistance (TATFAR). Intended to fortify relationships and collaborations on activities relating to antimicrobial resistance (AMR), the biennial in-person meeting provided members and partners the opportunity to plan, coordinate, and comment on technical activities for its next implementation period. 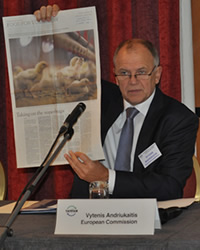 On day one of the meeting, attendees heard opening remarks from the TATFAR co-chairs; the European Union (EU) Commissioner for Health and Food Safety, Vytenis Andriukaitis; and Luxembourg Minister of Health, Lydia Mutsch, who all emphasized the need to improve antibiotic use in humans and in animals, surveillance of resistant infections, and drug development. Commissioner Andriukaitis remarked specifically that new business models to pique drug development, partnerships to harmonize surveillance, and national actions plans where they have yet to be developed are needed. View the full speech from the CommissionerExternal.

Minister Mutsch also pointed to the gains that can be made in reduction of unnecessary antimicrobial use by robust stewardship policies, such as has been experienced in Luxembourg. She stressed the commitment of the presidency to supporting international action on AMR, including attention to the new proposals on veterinary medicines in the EU legislative program.

The Taskforce’s co-chairs, Jimmy Kolker and John F. Ryan, moderated several sessions throughout the day on topics ranging from prudent use of antibiotics in human medicine in the US and EU member states to a plenary discussion covering the Taskforce’s key initiatives. 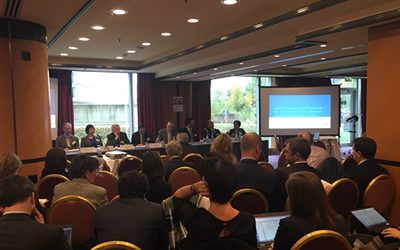 Session moderators leading discussion of breakout takeaways. The breakouts focused on TATFAR’s key areas: improve use in humans, improve use in animals, and improve the drug development pipeline.

Attendees also participated in robust discussions that produced proposals for joint actions to be taken during the next five years. These included work to standardize the definition of appropriate antibiotic use for surveillance; to produce a review of AMR reduction targets; to characterize transmission, surveillance, and communication related to AMR interventions in veterinary medicine; to have policy dialogues on regulatory control and on actions to strengthen surveillance and compliance. These and other proposals for initiatives will be refined by the TATFAR members on the second day of the meeting and then reviewed by the participating institutions before adoption.

Day two of the meeting began with a balanced session on ensuring access while conserving the effectiveness of new antimicrobials. This panel was led by Professor Otto Cars, Chair of ReAct and included guest contributor Dr. Ursula Theuretzbacher from the Center for Anti-infective Agents in Austria, who emphasized the need to maintain availability of older antibiotics.  Regulatory solutions and perspectives on stewardship were also presented.

The final session of the open meeting provided attendees with an overview of global initiatives on AMR including, WHO Global Action Plan on AMR (GAP), Joint Programming Initiative on AMR (JPIAMR), G7 Initiative and Global Health Security Agenda (GHSA) AMR action package. Jean Patel, Acting Director of the Office of Antimicrobial Resistance at Centers for Disease Control and Prevention and TATFAR member, outlined TATFAR’s role in global AMR and described opportunities for TATFAR to continue to contribute to global efforts.

TATFAR supports the implementation of best practice on addressing antimicrobial resistance by the TATFAR partners (U.S., EU, Canada and Norway). Its aims are closely aligned with the other international initiatives intending to support implementation of the WHO GAP. TATFAR’s unique contribution is a peer to peer collaboration of technical experts at the principal public institutions in the U.S. and Canada and the EU and Norway. In addition to building and maintaining ongoing cooperation between these institutions, TATFAR can also produce tools and models intended to be useful not only to TATFAR members, but where possible, to other global partners. To this end TATFAR will maintain contact and exchange of information with other relevant international initiatives to ensure ongoing synergy and coordination.

The meeting concluded with a closed session for TATFAR partners to review and develop an actions for the next implementation period.  TATFAR will continue this important collaboration and together with its new partners will work to complement and support other global work to tackle the antimicrobial resistance.  Check back for regular updates on TATFAR news and progress as we will continue to post to this website.