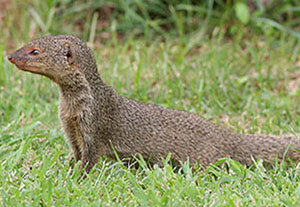 Mongooses were originally brought to Puerto Rico and the Hawaiian islands from Asia to protect sugar cane fields from rats and snakes. This small swift predator preys on birds, reptiles, and amphibians. Without a natural predator of its own, the mongoose quickly became a burden, hurting wildlife as well as poultry farmers and hunters. So far, this invasive species is responsible for the extinction of several reptile and amphibian species on the islands where it became widespread.

On December 1, 2015, Brett Petersen, MD, medical officer with the Pox and Rabies Branch (PRB), received a call from the Puerto Rico Department of Health (DOH) that they may have a case of human rabies. Because it’s rare in the U.S.—about zero to three cases a year—CDC takes any human cases very seriously.

The patient, after being in the hospital less than 24 hours, passed away, and autopsy confirmed the diagnosis of rabies. The problem was that the only exposure this patient had was a mongoose bite a month earlier, and there had never been a case of rabies from a mongoose bite reported in the US or its territories.

At the same time, the U.S. Department of Agriculture has been testing the mongoose population in Puerto Rico for rabies and found up to 40% of mongooses tested positive for rabies..

“It seemed like a perfect storm that was waiting to happen,” said Ashley Styczynski, MD, MPH, an EIS officer with PRB.

At Puerto Rico DOH’s request, CDC sent Styczynski and Cuc Tran, PhD, MPH, also an EIS officer on the Rabies Team in PRB, to identify people who may have been exposed to the patient, including healthcare personnel, family members, and friends, during the two weeks prior to onset of symptoms when he could have been contagious.

“The trip was actually only about 8 days, but because we had great support from the Puerto Rico DOH, we were able to do over 70 interviews in three days,” said Styczynski.

The team learned that people there used to eat mongoose when the deceased patient was growing up, so he never thought it would be a problem when he got bitten, highlighting the need for better health education.

An important lesson emerged from the investigations of the two hospital exposures, in which both people requiring PEP had not followed standard precautions and that was the source of their exposure.

“It’s a reminder about the importance of why we have standard precautions and how that’s important for occupational risk in any hospital in every situation,” said Styczynski.

The team learned that rabies prevention education, including warning about mongooses, used to be a part of the school curriculum. Besides educating the population about rabies risk from mongooses, it is important to identify and implement successful environmental interventions to control the disease in the animal population. USDA has already begun planning an intervention to use oral rabies vaccine baits, similar to what is being done on the US mainland for raccoons.

In addition, many pet owners do not vaccinate their pets, creating another exposure risk. Historically, cases of rabies in Puerto Rico have occurred as spill-over cases, where a mongoose bit a dog who bit a human. Puerto Rico already tries to address the problem by providing PEP for anyone who seeks healthcare after a mongoose bite—which unfortunately this patient had not—but it’s a very expensive way to intervene because the rabies immune globulin is hundreds of dollars per dose.

What are the Next Steps for Puerto Rico

The Epi-Aid team recommended several intervention strategies, starting with increasing education especially in the highest risk areas for the human-mongoose interaction by reintroducing it into the school curriculum, educating communities about how even routine pet vaccination for rabies can provide one more line of defense, and finally, emphasizing the need for people to be evaluated by a healthcare provider following any animal bite and the importance of standard precautions in all healthcare settings.