Haiti is one of five countries in the Americas where rabies in dogs continues to be a threat. It has the highest rate of rabies deaths in people in the Western Hemisphere. In the years after a massive earthquake in 2010 devastated Haiti’s rabies control program, CDC estimated 2 people died from rabies each week. Only a small number of these human rabies deaths were officially recorded by health authorities due to earthquake-damaged healthcare systems, limitations in testing capacity, and lack of rabies awareness and education among Haitian residents and medical providers in the country.

In 2013, the Haiti government, CDC, and other partners began building back systems to track rabies in animals in several regions in Haiti and saw an 18-fold rise in detection of rabid animals. In 2015, a CDC evaluation of Haiti’s dog rabies vaccination program found that only 45 percent of dogs were vaccinated as a result of the campaign, far short of the 70 percent vaccination level needed to stop rabies spreading in the dog population. In addition, the researchers found that Haiti has nearly twice as many dogs as previously thought, which has made reaching the vaccination goal even more difficult.

Since then, CDC and its partners have assisted in the development of local capacity for animal rabies vaccination and surveillance, and have trained animal health workers in managing mass dog vaccination campaigns.

One tool that has been essential in this effort is a mobile phone app designed by the nonprofit Mission Rabiesexternal icon that helps track canine rabies vaccination campaigns in near-real time. The app has been helpful in monitoring campaign success and directing where the vaccination teams should go to reach dogs that need vaccination. The ultimate goal is a 70 percent nationwide dog vaccination rate. If sustained for 5 years, this level is anticipated to disrupt the spread of rabies in dogs in Haiti. In addition to deployment of the mobile app, CDC and its partners have promoted several other activities to help reduce the burden of rabies in Haiti.

In 2019, Haiti reported only three human deaths, compared to 13 human deaths in 2011, which was largely attributed to intensive efforts by the Haitian government to rebuild rabies control systems with assistance from CDC and partners.

Investigating an Outbreak to Stop the Spread

CDC assisted in investigating a potential cross-border outbreak in 2019 after several children died from rabies in the Dominican Republic, which does not typically have dog rabies cases. The investigation concluded that dog vaccination rates were too low in Haiti and Dominican Republic, which resulted in a dog rabies outbreak along the border. Cases in dogs had not crossed into Haiti at the time of the response, so Haiti officials worked with the investigation team to vaccinate over 30,000 dogs along the border to prevent further human deaths in this region. The team used the mobile app to record all vaccinations and ensure that enough dogs (over 70 percent) were vaccinated to stop the spread of rabies. CDC trained healthcare providers in Pedernales, Dominican Republic and Anse-à-Pitre, Haiti on how to treat and report dog bites and rabies among people. The response team also provided a hospital in Pedernales with 100 doses of human rabies vaccine and 500 rabies prevention comic books. For more information on the investigation read the MMWR.

Since 2015, CDC and its partners have provided rabies education to 750,000 children and distributed 20,000 comic books to children and schools in Haiti. The comic books are based on the popular Haitian cartoon Ti Joel and educate children about rabies, dog bite prevention, and responsible dog ownership. CDC regularly evaluates the educational program to explore whether children remember what they learned about taking steps to avoid dog bites and protecting themselves from rabies. 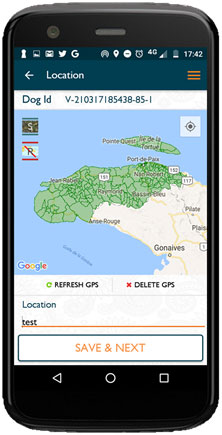 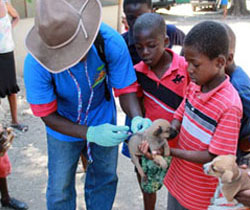 Children bring their puppies to the vaccination event in their neighborhood. 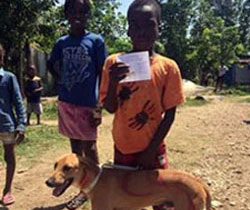 Haitian boy holds out the certificate of rabies vaccination for his dog. 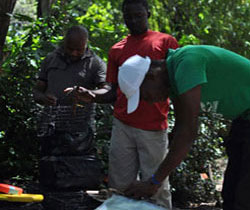 Team of rabies surveillance officers prepares traps for mongooses, another animal known to spread rabies in the Caribbean islands, to study the rabies burden in this animal population.